Inside Quirky’s Communal Approach to Marketing 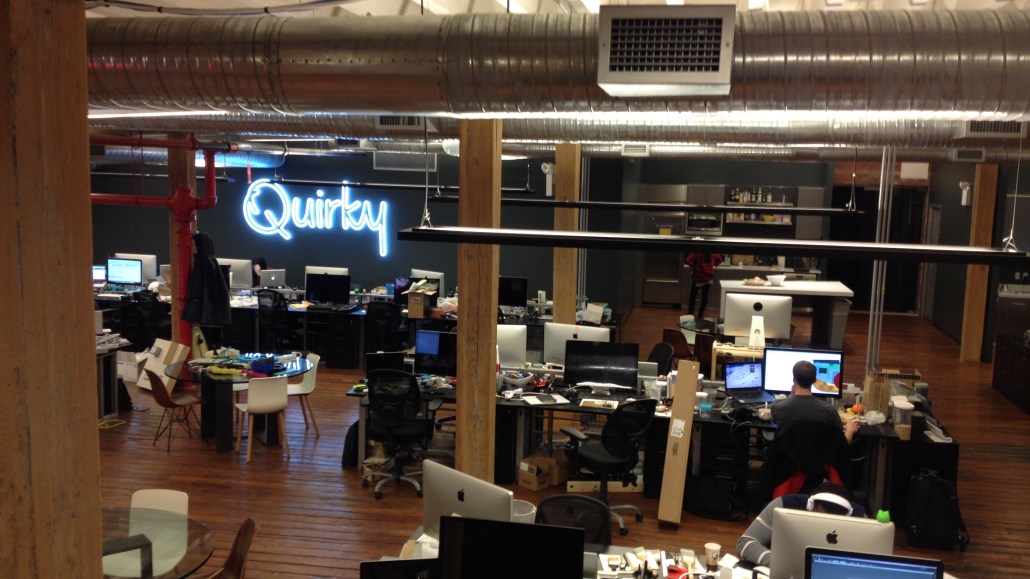 This Thursday evening, there will be a special improv performance at Quirky headquarters in the West Chelsea neighborhood of Manhattan. The merry-making will not, however, take place at the invention incubator’s office holiday party — it’s a marketing stunt.

Quirky is asking its community to come up with weird and creative uses of Spotter — a Quirky-invented motion, sound, light and heat sensor that syncs to your phone. The Magnet Improv Theater will be turning the best (and worst) ideas into live-streamed improv sketches. As Shirin Majid, head of content and digital strategy at Quirky, joked, “We’re calling it an experiment in Internet theater.” Quirky doesn’t want to do “marketing-y” marketing, Majid said — the collaborative invention company wants its branding and marketing to be, well, quirky.

Quirky is a consumer product company founded in 2009 by then-23-year-old Ben Kaufman, an inventor and startup founder. Kaufman had previously founded Mophie, an Apple accessories company, when he was 18, which he sold for an undisclosed sum in 2007 to MStation. Kaufman’s vision for Quirky was creating a way to make invention an easier and more collaborative process so that real people could see their product ideas come to life — and even make their way onto shelves at major retailers.

“Quirky is about egoless design,” said Kaufman. “Everyone has an idea — we are an outlet for that kind of creativity.”

To create new products, Quirky relies on its active community of more than 615,000 inventors and “influencers” — people who don’t necessarily come up with the original invention ideas but weigh in on the process. According to Quirky, it gets about 2,000 new product ideas a week that Quirky’s online community votes either up or down. Every Thursday night, Quirky holds a product evaluation session, where the most popular submissions get presented and debated by Quirky staff, community members and industry experts to see which ideas should move into the next phase of the invention process.

Thanks to Quirky’s staff of 150 — including in-house designers and engineers,  along with on-site technology and machinery like 3-D printers and laser cutters — the invention to production process, which normally can take years, is speedy: the average number of days it takes an idea to become a Quirky product is 120. Today, there are 120 Quirky products on the market with another 407 in the pipeline.

The thinking is that most crowdsourcing models involve a lot of people pitching ideas, only one person gets the glory, said Tiffany Markofsky, director of communications at Quirky. Quirky’s model aspires to be about the democratization of invention: everyone can have a hand in any part of the process, and the people who contribute to the final product are rewarded. More specifically, Quirky shares 10 percent of revenue from a product with the inventor and influencers, with 4 percent going to the inventor and the remaining percentage split among influencers.

That’s why the company puts its inventors and influencers front and center when it comes to branding each invention — even the product packaging includes a picture of the inventor, a bit about his or her story and the number of influencers who were involved in the invention process. For example, to promote the Pivot Power Genius, an app-enabled power strip that you can turn on and off remotely, Quirky made inventor Jake Zien as central as the product itself. Rather than just doing a regular product demonstration, Quirky had Zien, who happens to be a fan of rap, emcee a live-streamed rap battle using the Pivot Power Genius to activate the spotlight on each rapper.

“Collaboration exists from sketch to shelf,” explained Majid. “All of our inspiration comes from the community, so if we are ever stuck about how to market a product we go to them.”

When it comes to social, Quirky is starting to look into more ways to get its large and active community to be product and brand advocates on social. According to Majid, Quirky is working on a social media kit for its inventors and influencers to give them guidance on how to spread the word about products they invented or influenced.

The thing Quirky doesn’t want to do, though, is to “morph into a typical brand voice,” as Majid put it.

“We want to have that commercial polish, but we have to keep it real,” said Majid. “We don’t want that brand voice that sounds like it’s been vetted through legal.” No doubt Thursday’s improv show will take care of that.