Pitch deck: How Alibaba positions itself to brands

Alibaba promises a big opportunity to the brands who sell on its platform, but it can be difficult for international companies to wrap their heads around the Alibaba ecosystem and how its suite of apps, including Taobao, Tmall and Youku, reach and influence customers in China.

So, the company’s “Alibaba 101” pitch deck, obtained by Digiday, lays out the scope of the Chinese retail market, Alibaba’s full capabilities as a retail partner, its massive size and commerce infrastructure, its “New Retail” program, in which it’s investing in modernizing areas of retail including product innovation, customer acquisition, payments and physical stores, and of course, Singles’ Day, China’s shopping holiday and Alibaba’s biggest sales day of the year.

“This is Alibaba saying, ‘If you want in, you should go through us,” said the CEO of a U.S. brand selling through Tmall. “It positions itself as an ally, especially in contrast to Amazon.”

Competition with JD.com, a rival e-commerce company in China, is heating up as more brands eye the region for growth. And, according to the deck, Alibaba’s vision is to last for at least 102 years. To do so, and to win over these international players — which span from auto retailers to luxury fashion houses, to beauty brands, to CPG companies — Alibaba has to make it clear what it can offer.

By the numbers
Alibaba paints a picture in a pitch deck of a massive opportunity to scale, with the combined weight of China’s consumer market and Alibaba’s reach. According to the deck, China is set to import $30 trillion worth of goods between 2017 and 2022; in 2017, China’s retail market was worth nearly $6 trillion. A sizable amount of those sales flow through Alibaba, which had $768 billion in gross merchandise volume in its financial 2018. And of course, Alibaba points out that e-commerce and mobile are the driving forces of retail in the country. While 80 percent of the Chinese retail market is still offline, by 2020, the deck states, China will account for nearly 60 percent of global e-commerce, and 95 percent of internet penetration is on mobile.

As for Alibaba, its goal is to serve a total of 2 billion customers, through extending its ecosystem to new customers in developing markets. In China, its consumer sites are Tmall and Taobao. Outside of China, Alibaba has four other e-commerce properties: Lazada and Tokopedia, which covers Indonesia, Malaysia, Singapore, Thailand, Philippines and Vietnam; and Daraz.PK and PayTM, which serve India and Pakistan.

In 2018, Alibaba had 601 million annual active customers and $15.5 billion in annual profits. It drove $39.9 billion in total revenue, a figure broken down into four components. 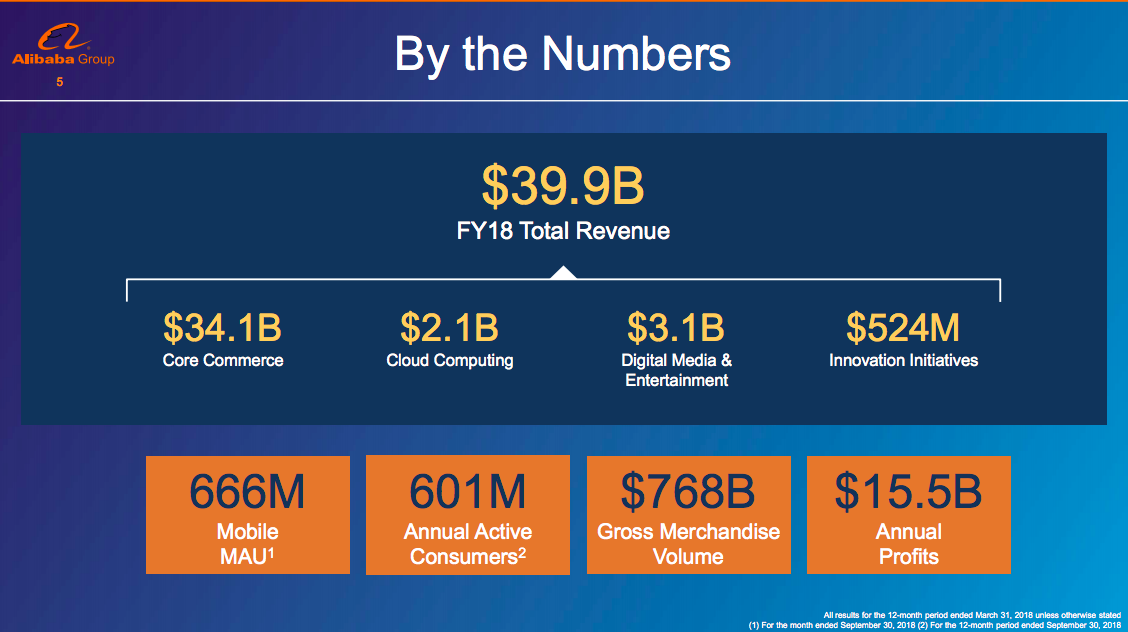 The ecosystem
Alibaba is more than just Tmall and Taobao, its biggest consumer-facing marketplaces — it emphasizes that its a “lifestyle portal.” It also umbrellas a food delivery app, a movie ticketing app, music and video streaming services, a travel booking site and a mobile phone top-up service. It reports that on average, users open the app 7.8 times per day, and spend 30 minutes in the app daily — compared to the 8.2 minutes that users spend in the Amazon app.

There’s also more happening underneath the surface. One of Alibaba’s top appeals to brands is its ability to offer target, data-driven marketing in order to reach the site’s 601 million users. Unlike brands selling on Amazon, they never have to worry about Alibaba using that data in order to undercut its sellers’ businesses by white-labeling similar products for cheaper. “Platform model means Alibaba doesn’t compete with merchants, it helps them grow.” 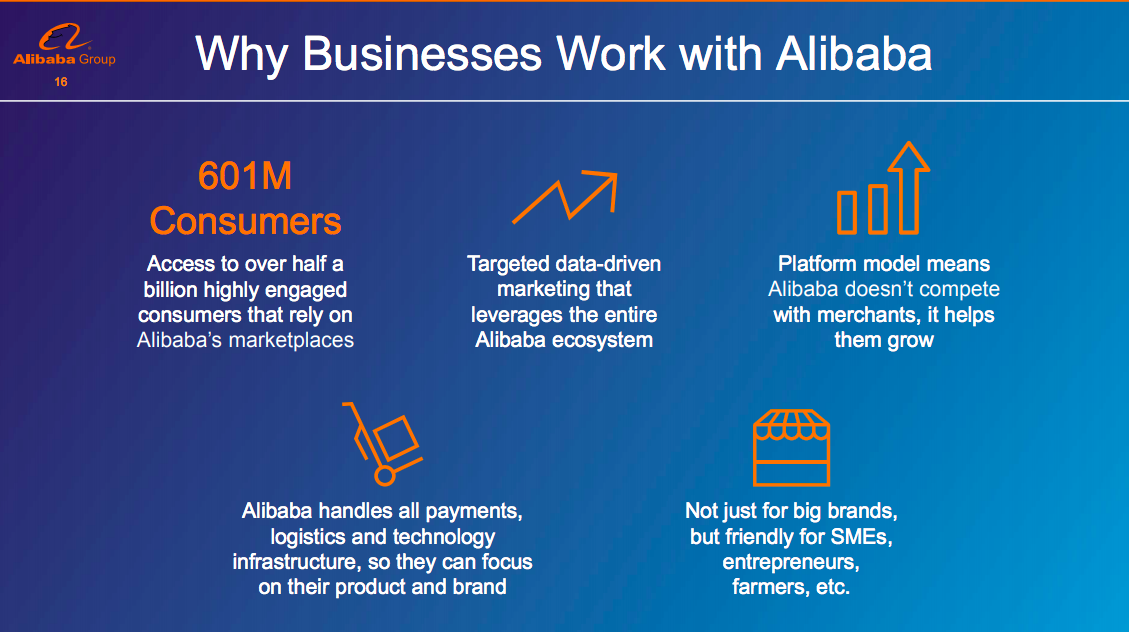 The pitch: By operating payments, logistics, marketing and data, Alibaba creates a data creation and re-fuel system that means sellers only need to focus on product and brand. 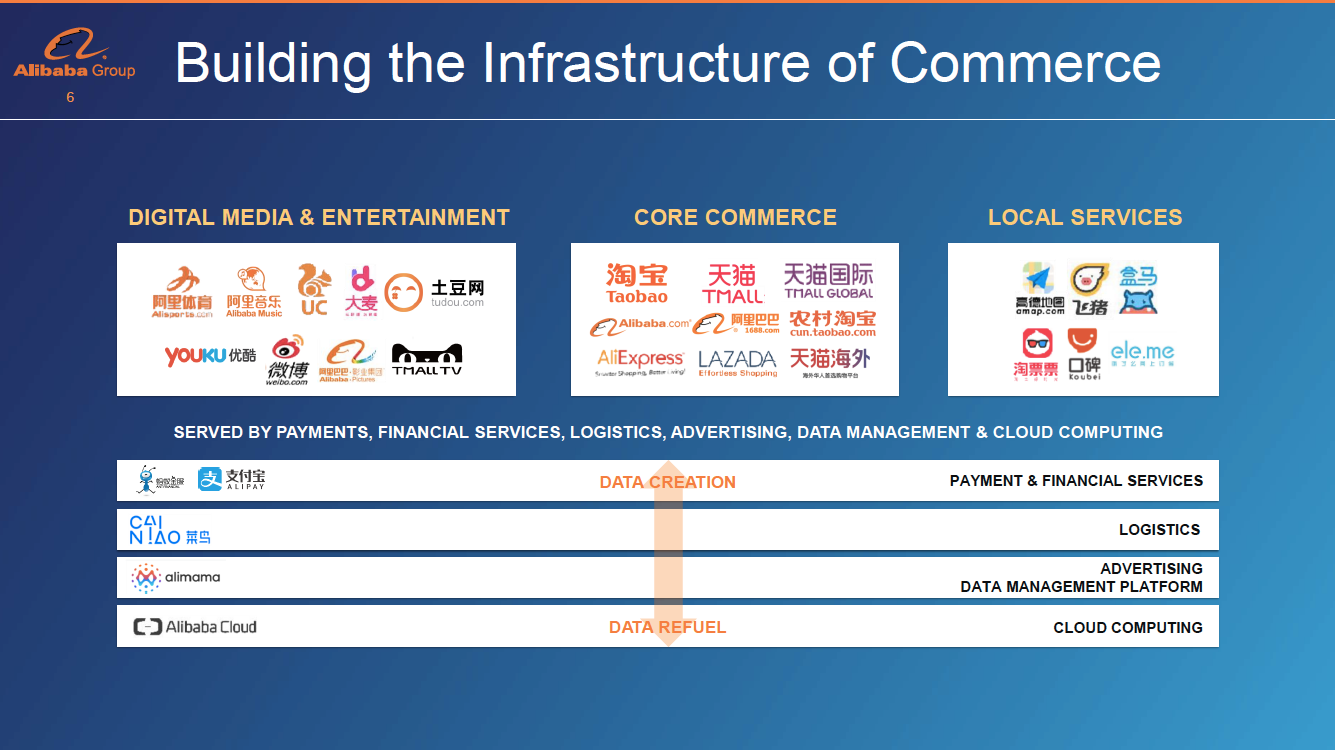 New Retail
New Retail, as Alibaba phrases it, is the company’s strategy to modernize the industry by linking together offline and online retail. For customers, that means rolling out buy online, pick up in store capabilities, better customer service on both channels, and better personalization. Data-driven recommendations encompass not just past purchases, but also ads clicked, search terms, links shared with a friend, stores visited, browsing history and TV show preferences.

Alibaba highlights two areas where New Retail is playing out: Grocery and convenience stores. Alibaba’s grocery store, Hema, has 100 stores and is powered by its mobile app, which is used to shop online as well as scan products for price and information in stores. Hema, Alibaba states, has proven the New Retail in-store theory that customers want more flexible delivery options when shopping online and in store, and that customer behavior data can be connected between the two. Next, the company wants to roll out the technology to existing brick-and-mortar. 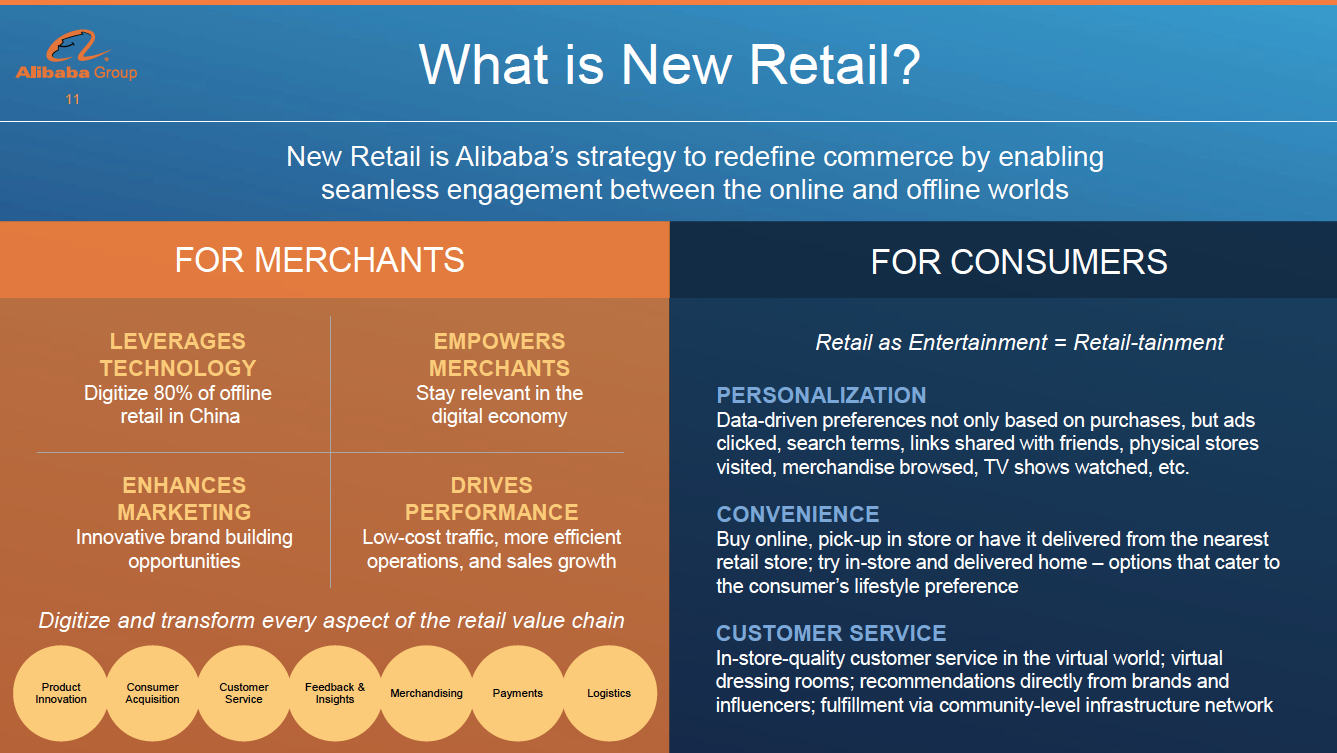 Singles’ Day
Finally, Alibaba throws the weight of Singles’ Day to the forefront. The 11.11 shopping holiday drives more sales than any other consumer event. This year, Singles’ Day’s gross merchandise volume amounted to $30.8 billion, more than two times that of Black Friday and Cyber Monday combined. More than 180,000 global brands participated in the event, which encompasses sales and discounts as well as a luxury fashion show, which has 58 million viewers, and televised gala event, which showcases products that viewers can purchase in real time.

Alibaba believes that looking at Singles’ Day alone is a way to understand the business’s overall economics at scale, with 1 billion orders being processed, 40 percent of which came from international brands. 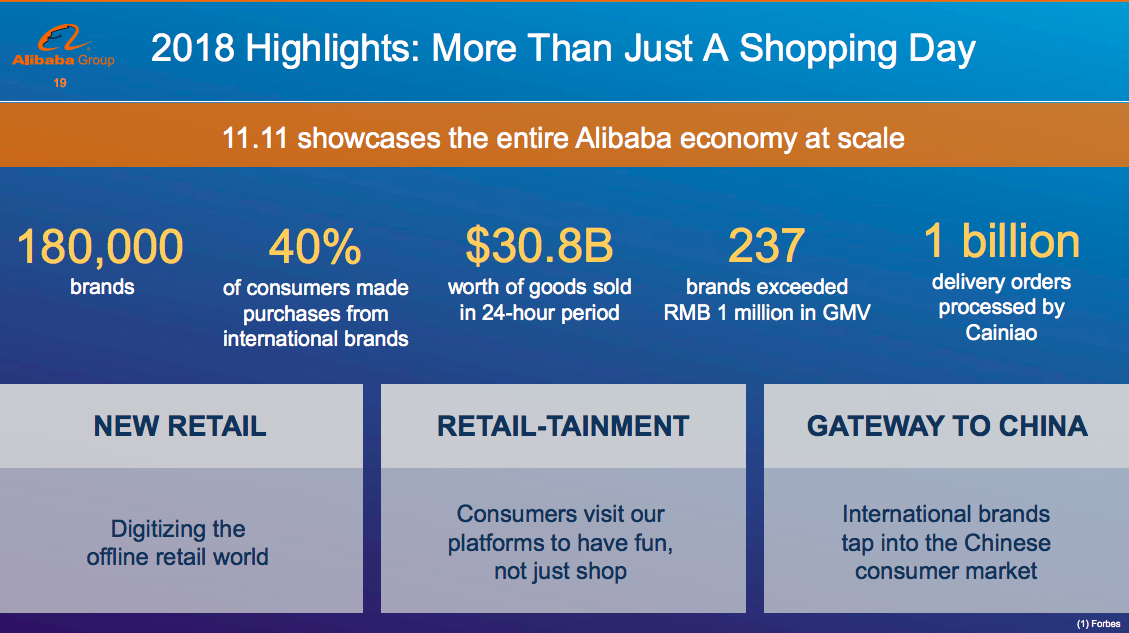