‘We’re at the onset of an industrial revolution’: The rise of robotics in retail 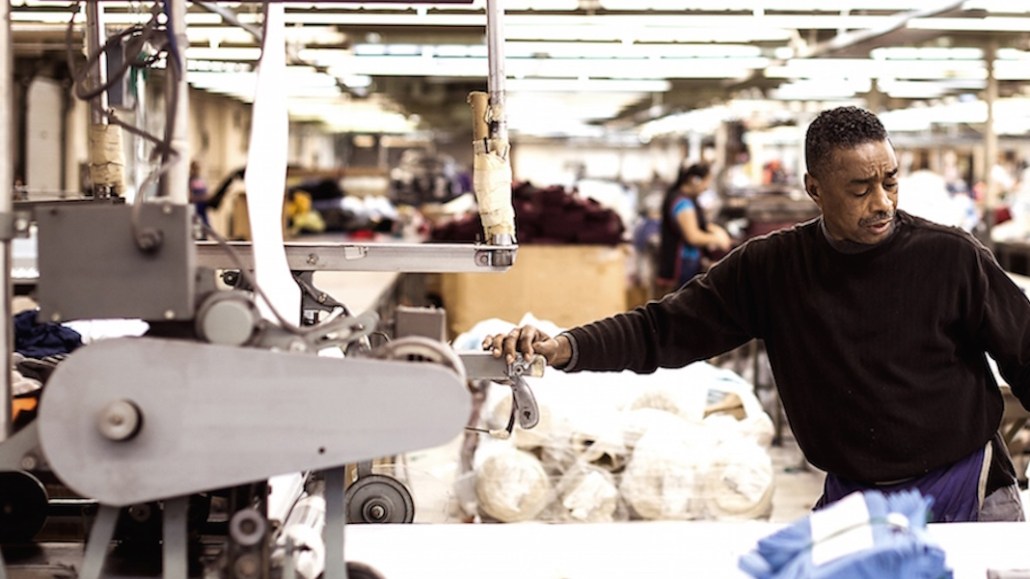 It takes ten steps from start to finish to cut and sew a basic T-shirt. In regard to manual labor, that’s a breeze, considering cutting and sewing a traditional dress shirt takes 78 total steps.

And yet, despite the simplicity of the production process, 97 percent of T-shirts sold in the U.S. are exported, according to data culled by Softwear Automation, an Atlanta-based company specializing in automating the sewing industry.

“The global supply chain is broken,” said Peter Santora, the vp of sales and marketing at Softwear Automation. “The only thing stopping companies from making goods where they are is cheap sewing labor. Everything else has been solved; it all comes down to cutting and sewing.”

Robotics and automation in fashion can make production and labor costs cheaper, bring supply chains closer to home — a move that not only cuts costs and environmental impact, but also helps brands compete on speed — and improve efficiencies in inventory, customer service and e-commerce experience. Jobs, of course, are at stake: Cornerstone Capital Group predicts that over the course of the next 10 years, automation will take 6 to 7.5 million jobs from the retail industry, or 38 percent.

It’s not going to be a sudden takeover, however. While the technology is already here, the industry hasn’t yet adjusted to it.

“The apparel retail market is one of the most competitive industries in the world, driven by shrinking product cycles, declining mall and in-store foot traffic, and the online retail onslaught,” said Paulo Sampaio, a data scientist at Edited, a retail technology company. “But it’s also one of the slowest in its uptake of technologies, like automation. Today, it’s more than buzzwords; it’s table stakes.”

Right now, the obstacles to wider adoption include imperfect intelligence and cost to overhaul existing systems. While the sew bots have mastered simplistic garments like T-shirts and jeans, more intricate items and fabrics, like lace dresses, are yet to be automated.

Once it’s in place, however, it will save brands and retailers on labor costs and production efficiencies, with the sew bots able to operate at full capacity for 21.5 hours per day, while reducing the average time it takes to sew a garment by 50 percent.

Not only will items be produced faster, they’ll hit the market faster, too.

“With robotics, you’re talking about getting from the production line to the distributor in a matter of days,” said Frank Henderson, the third-generation CEO of Henderson Sewing Machine Co. “Automation is narrowing that window, so you get to market much faster. The robotics field has driven all of this.”

Over the past year, brands and retailers from Burberry to Kohl’s to Adidas have announced plans to pick up the pace of production processes in order to fall in line closer with the fast fashion behemoths — like Zara, H&M and Uniqlo — that dominate the industry’s growth. Last year, Adidas opened Speedfactory in Atlanta, a robotics-run manufacturing plant that can produce and ship sneakers on demand in 48 hours. According to Santora, automated sewing can localize the production process, cutting down on the time it takes for new collections to hit the sales floor.

“Fast fashion retail has a much closer relationship between customer and designer,” said Santoro. “Technology is the key to that change taking place for other brands. It levels the playing field of the logistics that the fast fashion companies have put into place. It’s an industry-wide changing of pace that will be interesting to watch.”

Localization, personalization and customization
According to Henderson, 95 percent of apparel that’s sold in the U.S. is made elsewhere. With a robotics-run supply chain, retailers can bring their production cycles back to home bases, which not only narrows speed to market, but also shortens shipping windows for domestic customers and makes it easier to offer customized product.

Jodie Fox, the founder of customizable footwear brand Shoes of Prey, found that when scaling her business, she had exceeded the capabilities of existing production facilities. So, she opened her own.

“We’re heading to a future where customized product is the norm, and so the immediacy of that product is extremely important,” said Fox. “The shift, for us, started with manufacturing.”

Fox said that her software engineering team are all trained in robotics, and have built and programmed robots within the manufacturing process that use machine learning to predict the best way to arrange, prioritize and produce pending custom orders. With that technology in place, Shoes of Prey has been able to cut its shipping window from 10 weeks to two.

“The future of retail is small, nimble, highly personalized companies,” said Dan St. Louis, the director of Manufacturing Solutions Center, based in Conover, North Carolina. “The answer to their ability to scale is automation.”

Mapping out the groundwork for robotics
Retail’s razor-thin margins make any major changes to supply chains an arduous process. Fox said that’s why she had to look outside her existing manufacturing partners to overhaul its production. Santoro predicts that mass adoption of robotics in the supply chain won’t come to fruition for another 20 years — enough time for countries that depend on the sewing industry to adjust.

But the real retail renaissance will have to happen on the supply chain level, as brands look to get closer to customers, and the environmental and ethical impact of labor is increasingly called into question. Most importantly, according to Henderson, robots can perform at a higher level than humans at a cheaper cost. The initial down payment in the technology just stands in the way.

“I believe we’re at the onset of another industrial revolution, where robotics will boost and change manufacturers’ output,” said Henderson. “But we’re just now coming to terms with how this technology could reinvent manufacturing. It’s at a tipping point.”