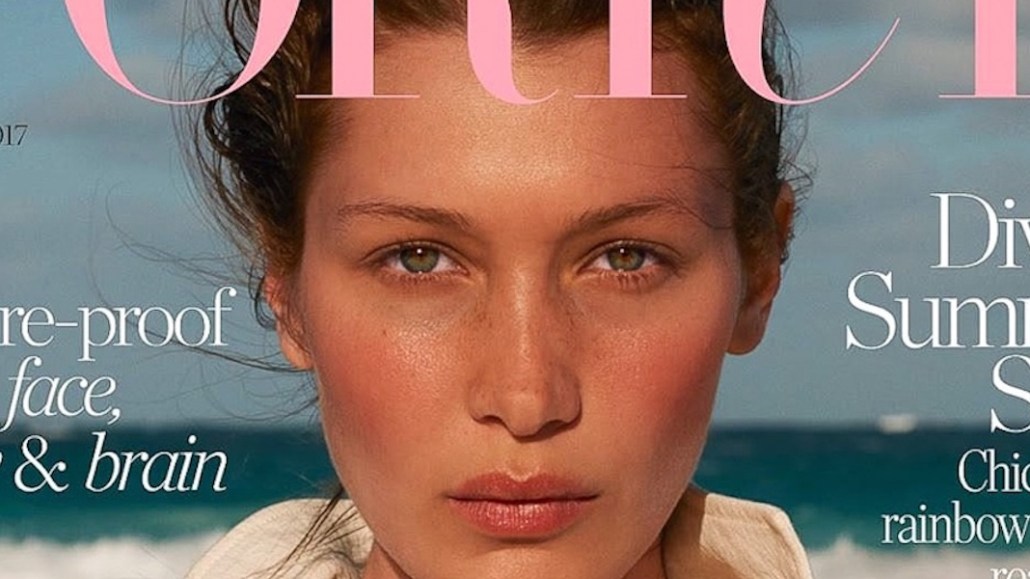 After running Porter and The Edit, Net-a-Porter’s print and digital titles, separately since 2013, global content director Lucy Yeomans combined the department into a unified front under the Porter name.

“Finally. We had been wanting to do it for a long time,” said Yeomans, who also serves as Porter’s editor-in-chief, a title she previously held at Harper’s Bazaar UK. “Porter is a brand name; it’s rooted in Net-a-Porter, whereas ‘The Edit’ as a title had gotten quite ubiquitous. Now, all of our content happens under one cross-channel platform. It’s more consistent.”

Content is a robust piece of both Net-a-Porter’s marketing and merchandising strategies: The company employs 70 people on its editorial team, and it publishes six issues of Porter’s print edition per year, which have featured celebrity cover stars like Emma Watson, Jessica Chastain and Bella Hadid. Previously, the print team at Porter and the digital content team at The Edit operated separately; while Yeomans oversaw both, there were silos separating each side of the content strategy. The Edit focused on trend-driven content, while Porter covered lifestyle, women’s issues, career and business content alongside its fashion editorial.

But as Net-a-Porter’s traffic shifted to more than 50 percent from mobile, Yeomans said, the need for a cohesive digital content platform became clear. Now, the combined content team works on Porter’s print magazine, as well as The Porter Edit, the digital content site on Net-a-Porter that is refreshed on a daily basis. Previously, The Edit was updated once a week. The editorial site is also translated for a global audience in French, German and Mandarin.

The Porter Edit on Net-a-Porter

As the lines between editorial and advertising blur at other revenue-starved fashion publications, Net-a-Porter’s content-and-commerce play is working off of the advantage that it’s not dealing with dueling agendas. And in online luxury, as competition among multi-brand retailers stiffens, a strong editorial point of view is emerging as a key differentiator and loyalty driver, an important piece in driving down the steep cost of customer acquisition.

Since Porter sits in Net-a-Porter’s broader ecosystem, editorial’s positioning is the glue bonding marketing and merchandising together into a more consistent machine.

“Today, the customer expects content over straightforward advertising,” said Robert Burke, the CEO of retail and fashion consultancy Robert Burke Associates. “What these retailers can offer, that no one brand can, is industry context. That’s why content sounds fluffy, but is so critical.”

In Yeomans’ eyes, fashion magazines are always trying to sell us something, anyway, and we read them for inspiration. Net-a-Porter’s publications just create a shortcut to getting to the purchase.

“As long as we have our customer in mind throughout everything we do, there’s no reason content and commerce can’t work together,” said Yeomans. “We have a single, editorial point of view that we communicate with the merchandising team and that the marketing team promotes. It all makes sense in the end, if you’re taking the approach of, ‘What would our customer actually wear? What is she interested in?’ That’s our editorial integrity.”

To get on the same page, the editorial team will preview new collections at the same time the merchandising team does, and then they’ll discuss what brands, products and trends they feel strongly about and believe will perform well on the site. That conversation continues as both departments discover new brands: If an editor comes across a new accessories brand not carried by Net-a-Porter, it will tip off the merchandising team, and the merchandising team will flag undiscovered designers for potential coverage.

The editorial team also looks to customer data when deciding what customers want to hear about, from Net-a-Porter’s trend performance reports, personal stylists and conversations with “EIPs,” or extremely-important people, Net-a-Porter’s highest-spending customers that drive about 50 percent of the company’s sales.

“When I was the editor at Harper’s Bazaar, I would have no idea what our readers were responding to,” said Yeomans. “Now I can watch what’s flying off the shelves and I know exactly what she’s buying.”

With editorial now backing one digital-print platform, there’s more opportunity for involved initiatives that extend beyond the publications. Yeomans said an editorial committee is working on a “content plus commerce plus cause” event this summer that, in partnership with a philanthropic organization, will include a content series, an event and a limited-edition capsule collection sold through Net-a-Porter.

“We can now take a cross-platform approach that we really couldn’t before,” said Yeomans.