Bruce Henderson, who joined Smile Direct Club in February as its first chief creative officer, said the biggest advantages of working in-house for a brand is how quickly his team can get things done.

Earlier this month, the company launched a new out-of-home campaign in New York City, with a digital billboard in Times Square, Taxi TV spots, digital subway and newsstands ads, programmatic digital boards and Vengo Vending machine displays. Shortly after the Times Square billboard went live, the team was told that they had an additional billboard spot adjacent to it if they wanted. According to Henderson, a writer, art director and animator came up with a concept and a prototype, workshopped it with the marketing team, and it was live in three hours the same day.

“That could have taken three to four weeks in a traditional agency relationship,” said Henderson, who spent 20 years working agency side at companies like Agency.com, Ogilvy and Jack Morton prior to joining Smile Direct Club. “With the speed that advertising and marketing moves today, that’s a significant advantage.”

Smile Direct Club’s 125-person in-house agency, which Henderson leads, is made up of brand planning, communications planning, retail, experiential and creative teams. Working with the company’s internal data analytics and marketing teams, led by CMO John Sheldon, Smile Direct Club’s in-house agency is responsible for all copy and creative in stores and in paid and brand marketing. Smile Direct Club runs out of home ads as well as TV and OTT platform ads, and is “aggressive on virtually all” digital channels, according to Henderson, especially Facebook, Instagram, Google and Pinterest. The size of the agency has grown over the past year, up from 40 people in the spring of 2018, as the brand looks to open more stores, has gone into a partnership with CVS and updates its digital media mix in response to performance on a daily basis.

“Having an internal agency, analytics and media group lets us create individual work for each channel and see in real time what’s working and adjust accordingly,” said Henderson. “We have weekly and daily updates along the lines of, ‘This ad’s performing really well, so let’s expand this across platforms quickly.’ We’re rigorous with analytics. It’s indispensable.”

More brands and retailers are rethinking their agency relationships as in-house creative teams allow for more control, faster decision-making, and more frequent updates to budget allocation depending on how certain campaigns perform. According to Digiday Research, the No. 1 reason clients break up with agencies is that their dissatisfied with the quality of the creative (see full survey results below). It’s not just data-driven direct-to-consumer brands cutting ties: Gap, Inc. brought creative in house last year to better align marketing with product drops, while Walmart broke off its long-time partnership with WPP earlier this year to grow Walmart Media Group. For the big-boxes in direct competition with Amazon, it’s a necessary investment for survival: Sophisticated in-house media operations can drive critical incremental revenue for retailers fighting falling foot traffic.

On the smaller scale, the goal of the new OOH campaign is to drive people to Smile Direct Club’s five Manhattan stores, where customers can make appointments for aligner fittings. To measure results, the brand is monitoring increases in visits to the stores as well as responses to the call-to-action of the digital billboards: Visitors in Times Square can text a photo to a number and send a selfie to get their photo on the billboard. Smile Direct Club has been testing out-of-home ads in new markets where it’s opened stores to drive as much brand awareness as possible, and has run New York City subway ads in the past. According to Henderson, the agency looks to the brand’s internal data to make decisions on what’s most efficient for its ad spend, and then makes decisions accordingly.

“We’re learning and responding every day to what customers want,” Henderson said. “I’m not the naysayer that says agencies are a thing of the past — it depends on the business. But I’m glad we work internally.” 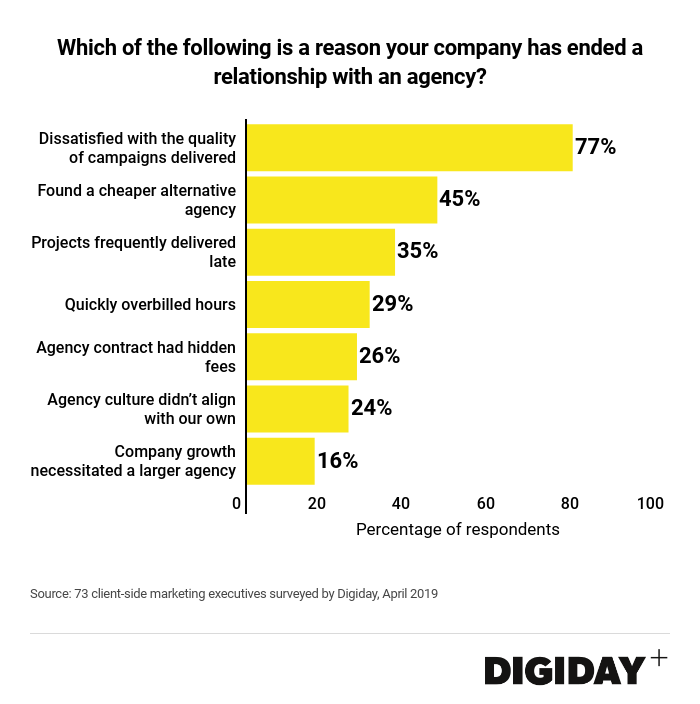 Mailchimp goes beyond email
In March, Mailchimp announced that it would be leaving Shopify’s marketplace, after Shopify said that it would “restrict partners” that tried to get merchants to leave Shopify. It was clear that Mailchimp was getting ready to offer more services that would rival that of Shopify’s. On Monday, Mailchimp pulled back the curtain on its ambitions, announcing the launch of a new CRM platform that goes beyond the company’s original focus on email marketing.

Mailchimp, which says its focus is on small to medium-sized businesses, now supports Facebook and Instagram retargeting (it previously only supported Google ad retargeting) and added the ability to repurpose content already created in Mailchimp to Facebook and Instagram. It also now gives businesses the ability to view customer lifetime value, based on the formula Mailchimp uses to estimate its own customers’ lifetime values. Additionally, Mailchimp now has a direct-mail feature that allows businesses to send recurring postcards to customers.

“In the marketing world, [direct mail] was sort of written off as an antiquated type of channel. But what we’re finding is in the digital world, your impression time is five to 10 seconds, maybe, with an ad and you can’t ever go back to it,” said Darcy Kurtz, Mailchimp’s vp of global product marketing. “But with a postcard, it’s much more personal because it’s a physical thing: It comes to your home, and you can keep it.”

Kurtz declined to say what other e-commerce features Mailchimp is considering adding. But if the company can convince its customers to turn to Mailchimp for all of their marketing needs, convincing them to one day turn to Mailchimp for, say, their point-of-sale needs is less of a daunting task. — Anna Hensel

The state of the Amazon marketplace
Feedvisor, a data and intelligence platform for sellers on Amazon, released its annual report breaking down what’s on the minds of the people doing business on the platform. In its “State of the Amazon Marketplace” report for 2019, Feedvisor found that overall, the majority of sellers saw revenue increase last year, with about half of that growth being driven by the third-party marketplace.

Also notable: Despite turbulence around changes related to a potential single-platform marketplace, sellers aren’t jumping ship. More this year said they planned to increase their Amazon business, while the number of sellers who said they planned to invest more in Walmart’s and eBay’s marketplaces declined. In general, Amazon controlling how brands sell on the platform wasn’t cause for much concern: Nearly half said that the shift of non-brand sellers from the first-party marketplace to the third-party marketplace didn’t concern them. What’s top of mind instead is increasing ad spend and rates and reviews.

Big spenders: Unilever plans to keep buying up more brands, but it’s not laser-focused on DTC.