‘It’s only getting better’: Buyers are shifting budgets to LinkedIn

The company is also working on lookalike audiences, according to sources, which would help advertisers target users who may be potential customers because they’re similar to the company’s existing customers. It’s one of the key features of Facebook’s ad platform.

LinkedIn also announced interest targeting on Jan. 23, where advertisers can now target ads to LinkedIn users based on their professional interests such as “arts and entertainment,” “business and management” and “marketing and advertising.” Digitas UK told MarTech Today the agency saw a 25 percent increase in click-through rates in campaigns using the new feature during a test.

“LinkedIn can be fairly hit or miss from what we’ve done, but they are building some great processes, and I do feel it’s only getting better,” said a media buyer, who requested anonymity due to a non-disclosure agreement with LinkedIn.

A November 2018 Digiday survey of 290 media buyers using LinkedIn found that 42 percent of them plan to increase their ad spending on the platform in 2019. About 47 percent said they expected to keep budgets the same, and 11 percent said they would decrease spending. 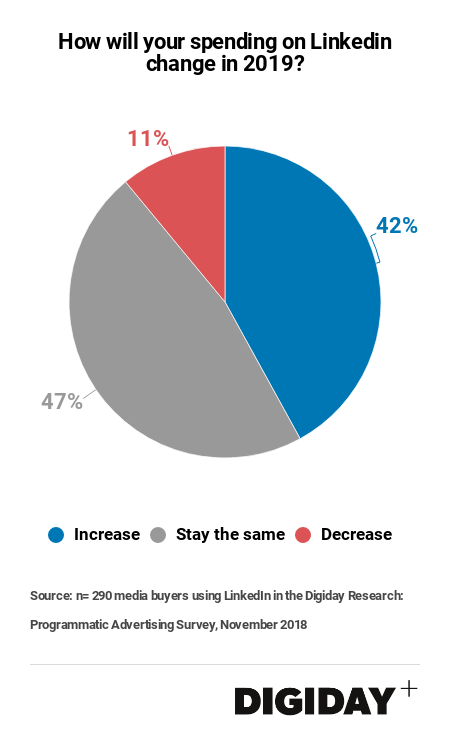 Despite the product’s improvement, buyers say LinkedIn ads can be quite expensive. Betsy Hindman, a digital marketing consultant for business-to-business clients, said LinkedIn video ads can be six to eight times more expensive than Facebook videos ads, whereas a sponsored post with a static image or an article link on LinkedIn would be about three to five times more expensive than Facebook. Another buyer said video view average costs are $0.08 on LinkedIn versus $0.02 on Facebook.

“Facebook has gone up of late, but Facebook video targeting is still slick and cheaper. But of course on Facebook, you cannot target people by their job title or where they work with any accuracy. Reaching CEOs and people with the title ‘business analyst’ is critical for SaaS companies, for example,” Hindman said.

Indeed, a benefit of LinkedIn advertising is the unique audience of business-minded professionals. Hindman said she could target LinkedIn users who are connected to those at a big company with more than 10,000 employees. For example, she could target first-party connections with Oracle employees. That audience could be especially useful to business-to-business companies.

“The CPMs are extremely expensive versus alternatives, and I’m not a fan of the ad units of targeting either, but it has its place for super corporate clients like a BP or Adobe selling software or a major boring B2B SaaS company,” said one buyer at a large global agency.

That ability to find enterprise customers is one reason why Foursquare, a location technology platform, decided to focus its advertising budget on LinkedIn compared to Facebook, Twitter, Instagram and other social networks last year.

“We know [LinkedIn] drives us qualified leads whereas Twitter and Facebook are great for reach and awareness. But when it comes to driving real revenue impact, for every five figures we spend on LinkedIn, we’re seeing six figures in return,” said Jacob Ehrlich, Foursquare’s director of performance marketing.

On LinkedIn, Foursquare spends the majority of its budget on lead-gen ads and LinkedIn Elevate, a product that helps companies find content for their employees to then share on the platform. Foursquare’s Ehrlich said his company sees eight times engagement on posts when they see employees share compared to the company’s page.

And buyers said LinkedIn’s internal ads team have been helpful, whereas Facebook’s team has continually been frustrating. The sales team operates a bit differently than the other platforms. While YouTube, Twitter and Snap all have sales materials that “fights Facebook directly, LinkedIn never pitches that way. They usually stay in their own lane,” said the buyer at a large global agency.

Buyers have a lot of on their wishlist for LinkedIn. Hindman said for LinkedIn video ads, specifically, she’d love to be able to retarget LinkedIn users based on the length of video views like she can on Facebook. Ehrlich of Foursquare said he would like lead-gen ads to be more visually appealing like Facebook’s Canvas. He also questioned why LinkedIn hasn’t introduced vertical video for publishers or advertisers — except for a test of LinkedIn Stories on college campuses.

LinkedIn is “working a bit in reverse with what we seeing trending. When you think about video, it’s a high-cost piece of content to produce. We’re in a day and age where you have platforms like Instagram and Snapchat pushing content creators to adopt vertical video. LinkedIn is behind the times, still focused on horizontal video,” Ehrlich said.