Gerry Graf listens to ‘Annie’ when he’s feeling down 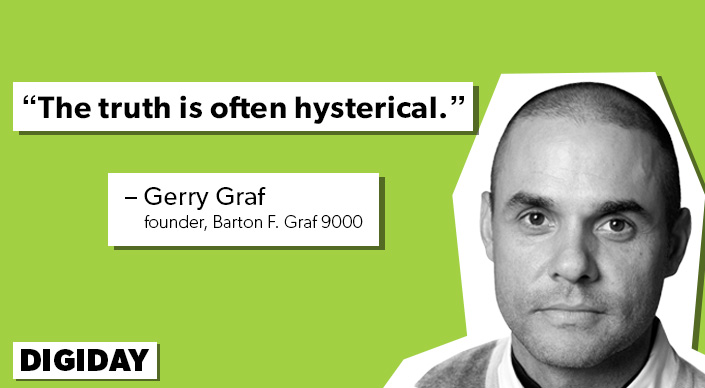 Gerry Graf is the creative brain behind some of the weirdest ads you see on television, including that Kayak commercial featuring two dudes sharing a sweater and that Ragu campaign that included a spot in which a kid walked in on his parents, er, doing it.

But Graf, the founder of the agency behind these campaigns — Barton F. Graf 9000 — is also one of the most prolific and well-known creatives in advertising, having served high-profile stints at Saatchi, BBDO New York and TBWA/Chiat/Day. (Barton is Graf’s father’s name, while “BFG 9000” is a gun in the game “Doom.”)

A week before he returns to the Super Bowl (he took a six-year break and is back to do GoDaddy’s big-game campaign), Digiday got him to share his View from the Top. This interview has been edited. Excerpts:

You’ve been called the “class clown” of the industry. How do you stay funny?
I don’t know. But I do know you’ve got to be careful about trying to be funny. My dad was the funniest person I ever met, and he never told a joke in his life. I think when people say I’m funny, I’m usually just pointing out strange inconsistencies, and it’s usually the truth.

Does that show up in the work you do? It feels dark sometimes.
When we do campaigns and stuff, what we always do around here is talk about reality. Because you want people to believe you. The truth and the way things go often times is hysterical. For example, when you’re talking about childhood in advertising, it’s usually perfect kids in the world. The whole family is in white t-shirts and jeans. When we were doing Ragu, it was, like, childhood is hard, man. It’s the worst thing in the world. I’m amazed we exist as a species. It’s funny, but it’s also true.

What’s the hardest part of being a boss?
I’m experiencing it now, now that I’m a boss. It’s different here than when I was just running a creative department and I didn’t have to care about it. When you start a place and you’re a founder, every problem comes to you. You used to just take care of creative problems. But now, every single problem comes to you.

How do you decide what ignore then?
I’m good at that, at deciding priorities. I found myself over the past four years sitting down and thinking what has to get done today. Keeping it short term helps a lot. There’s always gonna be problems, but you have more people to solve them. I remember being in a fishbowl in our old office. Something would come up and something would happen, and I would be sitting with my hands in my head. [CEO] Barney Robinson came in and was like, “Everyone can see you!”

You can’t show too much weakness.
I remember a year and a half ago we were going through a tough time and I was walking around. Barney found me again. He always finds me, and I had my headphones in, and I told him to listen. I was listening to: “The sun will come out tomorrow” from “Annie.” Except I had changed the words, and it was like, “The sun will come out tomorrow/Unless it’s raining and it will be crappy again.” I have a bunch of things listed as the worst things in the world that could happen. They’ve happened. And I’m still here. Being a creative person, I can come up with ideas for every situation that is going to go wrong.

And yet…
Yeah, it’s just like having kids. This is the most fun I’ve ever had. It’s the most fulfilling job that I’ve ever had. I love not answering to anybody. I’m pitching, or I’m creating work for a client presentation. It’s just us, and we say, “OK, let’s go in with this,” and not having to check off with anyone else. That makes all the stuff we’re talking about worth it.

What’s the worst mistake you’ve made as a leader?
I’ve made a lot. I made one more right decision than I’ve made mistakes, so that’s why I’m here. One I made early on was that I simply expected everyone else to work as much as I worked. So, if I’m here until 10, then you should be here until 10. If I’m working weekends, you should work weekends. This is my place, and this means everything to me. For me, this is a 24-hour job. I’m constantly thinking about Barton F. Graf. Everyone else isn’t. That was unfair.

Who were the bosses you learned the most from?
I always say I got my advertising MBA from Goodby Silverstein. I learned so much there. I worked with Rich [Silverstein] more. He said the only way creatives are going to grow is if you go out and you tell them it’s OK to fail. I got great advice from Jeff [Goodby] when I became a creative director. He warned me against two things: When you go from being a writer or AD to CD, your instinct is, you have to do everything. Don’t. And don’t be friends with the people you manage, because you start approving mediocre work.