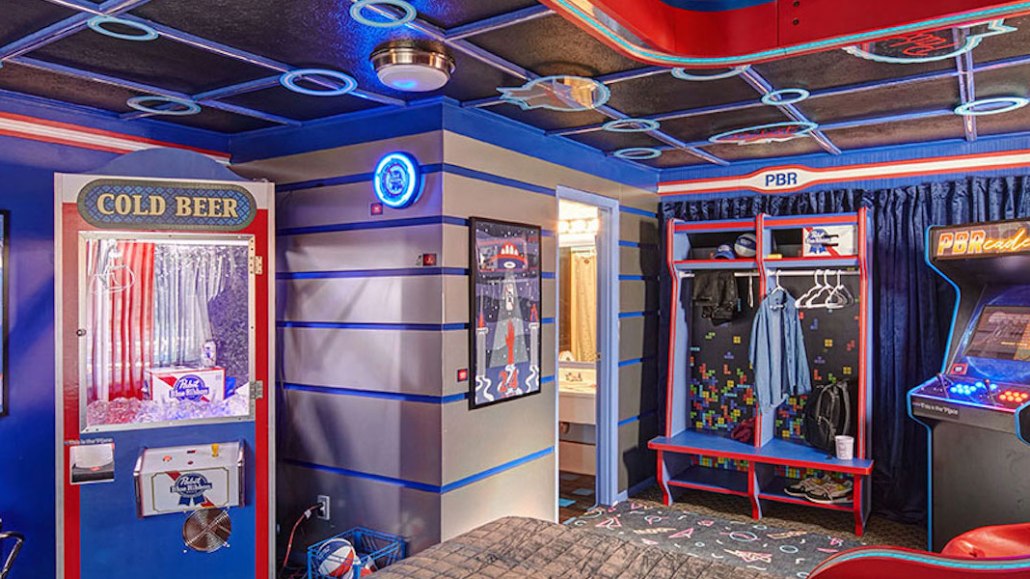 Since the beginning of the month, diehard fans of Pabst Blue Ribbon have been able to book three tricked-out motel rooms — one arcade-themed room, one dive bar room and one recreation room — at the Grand Traverse Motel in Traverse City, Michigan. The rooms are part of an experiential effort from the brand, as it aims to translate how people feel about PBR into real life.

“When you think of Pabst as a place that can exist in your mind it’s really warm, inviting, nostalgic, no thrills, it’s timeless,” said Nick Reely, vp of marketing at Pabst Blue Ribbon. “What sort of real life location would evoke those same feelings? A motel. [Motels are] inviting, they don’t know class. [People staying there] can be affluent or on a budget. They’re frozen slices of Americana.”

With this experiential effort, led by PBR’s new agency DNA, which will oversee its overall marketing strategy, the brand is looking to tap into what people think of when they think of PBR — that it’s “classic, traditional, Americana,” explained Reely. The motel rooms, which are decorated with bespoke items like a jukebox made to spit out a PBR, are available to rent until Labor Day. Roughly 70 people are expected to have stayed in the rooms throughout the campaign.

Focusing on a “one-to-one, high touch” experience with fans can help build more “favoritism, fandom and loyalty,” noted Reely, when asked about the intimacy of the effort. Still, the brand will amplify the experiential offering by working with paid partners who will visit the motel, experience it and share their experiences on their social channels. For this aspect of the campaign, PBR has chosen partners it already works with, including comedians and professional skaters, as well as pro-wrestler Matt Cardona and his wife Chelsea Greene, rather than tapping social influencers based on follower count, noted Reely.

It’s unclear how much PBR spent on the experience, as Reely declined to share the brand’s budget for the effort. But Reely did share that experiential makes up roughly a sixth of PBR’s media budget this year — a slight increase over 2021 — with the rest of the budget divided among channels like billboards, audio, streaming video and social.

Leaning into experiential at this moment makes sense to Greg Erdelyi, executive creative director and partner at brand consultancy Prophet. “People are going out more now,” said Erdelyi. “They’re traveling, flooding airlines. Brands are as exuberant as people to return to in-person experiences.”

As for depending on people attending the experience to amplify the effort, that approach fits with the move toward user-generated content that has become more common among brands.

“There’s been a shift from storytelling to storydoing,” explained Alasdair Lennox, group executive creative director of experience, Americas, for Landor & Fitch, who added that this approach gives power over the brand to the attendees. “The people who book the rooms no longer are just guests but influencers. They’re going to put it on all their channels, tell their world.  [PBR] is getting themselves out of the way and letting fans of the beer become the storytellers for the brand.”

Going forward, PBR would like to do more experiential marketing that evokes the feeling of the brand in-person, Reely said.

One thing the brand has no plans to do, however, is lean into its affordability in advertising, despite the talk of a looming recession.

“We’re not paying too much attention to the recession [chatter],” said Reely. “We know we offer good value but we don’t see price as the primary reason people purchase PBR. Creating messaging around cheapness or being inexpensive is not in our bag, we’re not really doing that. We love to be seen as good value for the money but not that you’re making a concession when you consume or love our product.”