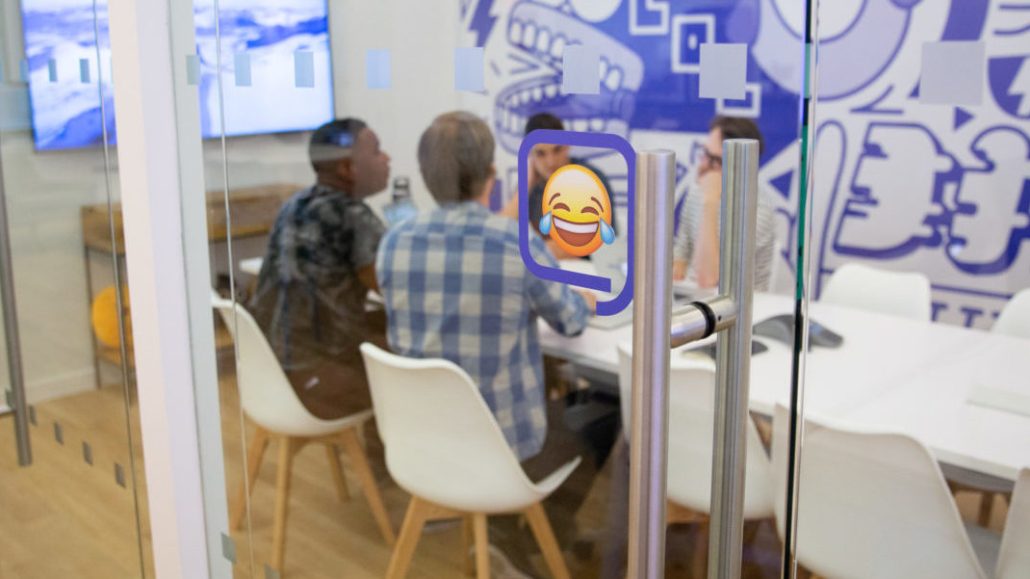 Don’t let the name fool you. Emogi isn’t focused on the static emoji — from the taco to the soon-to-come lobster — shared across smartphones. Rather, the startup is all in on GIF stickers.

To Travis Montaque, the 26-year-old founder and CEO of Emogi, GIF stickers are the best form of communication in online messaging today. Seated inside a large conference room at his company’s new office space near Bryant Park, he described text conversations around a recent big moment in sports: LeBron James joining the Lakers.

“We had him in the Lakers garb. You can’t do that in a GIF because no GIFs can capture that moment, emotion and cultural awareness. It has to be able to convey not just that LeBron went to the Lakers, but if you’re a Lakers fan you’re excited versus if you’re a Cavs fan you might be sadder,” Montaque said.

That’s where Emogi comes in. The startup’s team of designers creates animated stickers — like of LeBron in a Lakers jersey coming out of a money pit — to convey moments.

In May, Emogi closed on $12.6 million Series A, bringing its total funding raised to $18.8 million. The company recently hired Greg Wacks, formerly U.S. head of creative strategy at Snapchat, as its global head of content. Jonathan Murtaugh, who previously managed Facebook’s clients in film and television from Los Angeles, joined as Emogi’s global client partner this month. Emogi’s staff is 25 employees.

Lynda Liu, Emogi’s director of marketing, said Emogi recently hosted a group of teens at the office to ask about their preferred communication methods. Liu said that when asked GIFs or stickers, the majority of teens said stickers because with the “context you could send something is wider. A GIF is tied to one moment.”

While the industry of GIF-making is nascent, it’s already quite competitive. Google bought Tenor earlier this year. There’s also Giphy and Gfycat. Emogi is a bit different since it focuses exclusively on GIF stickers. Those are available within iMessage, Gboard, Facebook Messenger, dating app Plenty of Fish and more. Though, Giphy also creates GIF stickers and those are available within Snapchat and Instagram. The GIF section of Emogi’s keyboard is powered by Giphy.

“There’s GIF searches in the world, but Emogi is a content engine that lives in the keyboard, cameras and livestreams, whatever means [people are] communicating to deliver the perfect piece of content at the right moment in time.” said Montaque.

Emogi’s GIF stickers are curated by its staff and algorithmically. For example, on National Tequila Day, the Emogi keyboard shows tequila-related stickers before a user searches for anything. That first page can also change based on time of day and by the conversation. It adheres to user privacy by only analyzing the context on a user’s device and pulling the relevant stickers.

That type of system also applies to Emogi’s brand campaigns. Emogi has worked with Tide, Ikea, Bose, McDonald’s and Mucinex. Mucinex ran GIF stickers from December to January. Emogi tracked that the stickers were shared within 107,000 conversations daily. That included 7,500 shares of the Mucinex logo.

“It’s a positive sign that putting our brand in front of [consumers] is not annoying. Stickers featuring Mr. Mucus or the Mucinex name performed better than generic sickness stickers,” said Brian Dolan, senior brand manager at Reckitt Benckiser Health Equity, which produces Mucinex. “We have a character who breaks through. You love him or hate him, but people know him.”

Emogi and Dolan declined to comment on the exact price of the campaign. It varies depending on the scale, such as the duration of the campaign and the number of GIF stickers. Dolan said his company consulted with its advertising agency McCann Health, as well.

“Emogi has been fantastic. The challenge is scale. Is there a platform that can get into every house in America? Where you can reach more people?” Dolan said.

Emogi may not be on every phone in America. According to Apptopia, the Emogi app has had 190,000 downloads on iOS and Android since launch. Emogi claims 1 billion message send per month through its integrations with messaging partners. The startup is dedicated to bringing more standardization to GIF stickers, at least.

“Messaging is the most common form of communication that people do, period, so we’re excited to be getting more brands involved,” Montaque said.