Marketers expected Europe’s General Data Protection Regulation to wreak havoc with their attribution measurement efforts, but signs suggest it hasn’t been as disruptive as some had feared.

But five months after GDPR came into effect, some marketers and ad tech execs say its impact on attribution hasn’t been significant. “GDPR isn’t that bad to be honest. Most attribution marketers saw it coming,” an executive from one major DSP told Digiday.

The initial fear and uncertainty of marketers was that GDPR would limit the data consumers would share with them, making it more difficult to track their behavior online. That, in turn, would make it more challenging to attribute consumers’ online or offline purchases to exposure to digital advertising.

But more than the impact of GDPR, major platforms could be impacting the ability of marketers to measure attribution. According to Tina Moffett, senior analyst of customer insights at Forrester Research, more so than GDPR, Google limiting third-party access to its ID data, “essentially crippled attribution measurement unless you’re using Google.”

In response to GDPR, or under the guise of it, Google announced it was limiting the use of ID’s from what was then DoubleClick to marketers. Google said the move was intended to accommodate consumer requests to delete their information, but it essentially made marketers more dependent on Google, making it harder for marketers to get a holistic view of their attribution. “Google is saying nobody can take cookie level data out of the Google ecosystem for measurement and targeting — they’re doing that to protect themselves…” Moffett adds.

“[It’s] worth distinguishing between what’s a result of GDPR and what’s result of certain companies’ hostile and opportunistic response to GDPR,” the ad tech exec said. 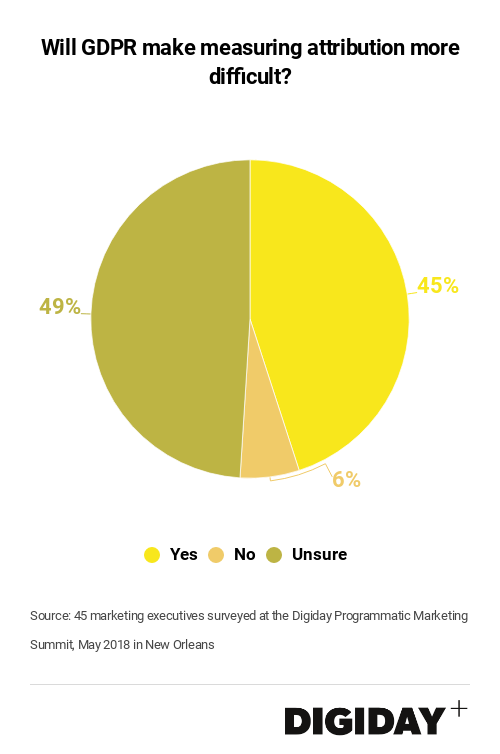 Google’s decision has had a rippling effect across the companies offering attribution services. “All the solution providers with the exception of Google are in the wait and see mode to see what Google can help provide them,” Moffett added.

Attribution measurement, specifically multi-touch attribution, is difficult to say the least. Only 1 in 5 marketers in previous Digiday Research said they were confident in their ability to measure attribution. Further, 40 percent of those marketers pointed at the lack of data from platforms, like Google or Facebook, as a key reason why they struggle.

Amazon, Facebook and Google, have all released their own attribution measurement tools, but marketers are skeptical of letting the platforms grade their own performance. Marketers could come together to form a unified ID system that would allow them to more easily measure things like campaign performance and attribution. However, AppNexus, having recently been acquired by AT&T, pulled out of the Advertising ID Consortium making such a scenario increasingly unlikely.