Marketers worried about brand safety issues are choosing to steer clear of emerging social platforms like TikTok and Reddit, typical for platforms heavy on user-generated content that don’t have mature advertising frameworks yet.

In a survey of 94 client-side marketers by Digiday in April, 38% of respondents said they avoid advertising on TikTok and while 34% avoided Reddit due to brand-safety concerns.

Meanwhile, 22% of marketers bypassed Snapchat and 21% choose not to advertise on Twitch because of the same fear. YouTube, which has arguably had the most brand-safety issues (including one just this spring that involved its comments section) had only 12% of marketers surveyed saying they would avoid it.

Almost half of the marketers surveyed — 46% — said they aren’t avoiding any social platforms at all because of a brand-unsafe environment.

Andrew Sandoval​, director of biddable media at The Media Kitchen, said his agency feels comfortable advertising across any of the platforms because of the ability to focus on specific subreddits. “It works really well for certain niche communities,” Sandoval said of Reddit. “You already have an idea of the content of the environment you’re targeting.”

But when it comes to high-level branding campaigns on Reddit, things can get dicey. “It’s a hard place to run a branding campaign because the content is so unpredictable. One day it could be nothing but Chinese articles, the next could just be about ‘Game of Thrones,’” said Sandoval​.

Marketers running brand-awareness campaigns with a high aversion to risk are most likely to skip out on smaller, but growing social platforms. Conversely, direct-response advertisers intensely focused on performance have proven themselves to be less concerned with where their ads appear. 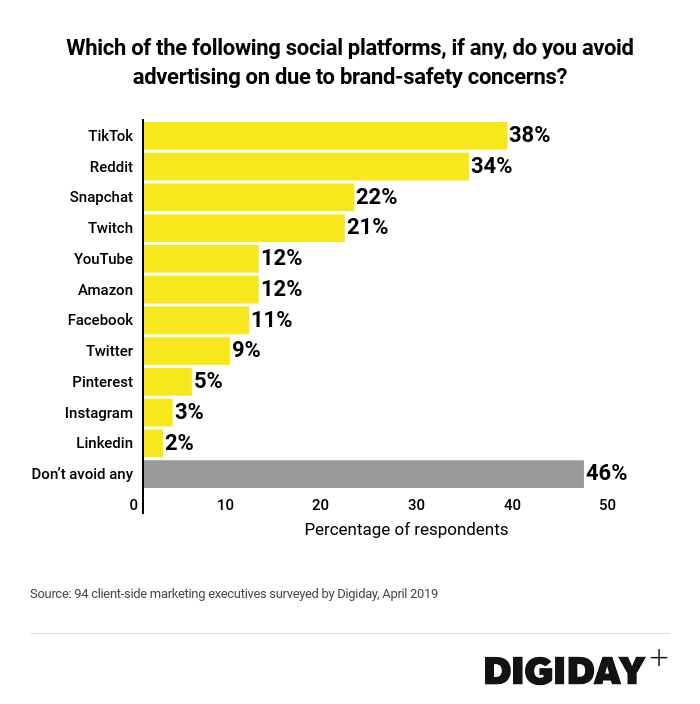 Part of the concern when it comes to upstart platforms like TikTok, Reddit and Twitch, is that marketers “are naturally concerned with user-generated-content,” according to Phillip Huynh, vp and paid social strategy lead at 360i. “What is safe versus unsafe is very flexible from a consumer standpoint, but not from a brand standpoint,” he said.

Huynh added that these concerns are very reminiscent of early concerns marketers had with Snapchat. “Marketers were worried when they didn’t know the content was going to appear before or after their ad. Once people understand the platform they’re marketing on, then those brand safety concerns go away.”

Facebook’s efforts to combat objection content on its platform might also make it tougher for other platforms to convince marketers of the safety of their environment. “Facebook is employing thousands of reviewers to police their platforms and platforms are being held to those standards,” said Sandoval​.

For its part, Reddit is taking steps to be a more welcoming place for advertisers. In a pitch deck obtained by Digiday, Reddit touts an “anti-evil” team which has cleaned up hate speech on the platform. The platform also offers other safety features like turning off comments for sponsored posts, as well as whitelisting and blacklisting tools.

When running campaigns on TikTok, 360i said it was able to work with its own internal creator groups or TikTok directly to help craft messages for clients to ensure it met brand-safety requirements.