Brand safety isn’t a key factor driving ad buying through private marketplaces (PMPs), despite their promise to provide a safer environment for advertisers. A Digiday survey of 93 programmatic marketers found that less than half, 44 percent, are currently using PMPs in an attempt to improve brand safety.

When companies purchase inventory on open exchanges to reach audiences on platforms or publisher sites, they risk having their ads appear next to objectionable content or images. Major companies, including Allstate, were surprised to find that their ads had made their way to Breitbart, for example. Over three-quarters of companies explicitly avoid advertising next to Trump-related content and numerous companies withheld spending on YouTube last year after their ads appeared alongside objectionable content.

As companies seek to insulate themselves from the potential backlash of an unsuspecting brand-safety scandal, private marketplaces have often been touted as a potential solution because they require direct relationships with ad sellers. Meanwhile, PMP spending is rising and 97 percent of publishers say they expect to increase the amount of transactions they run through a PMP. 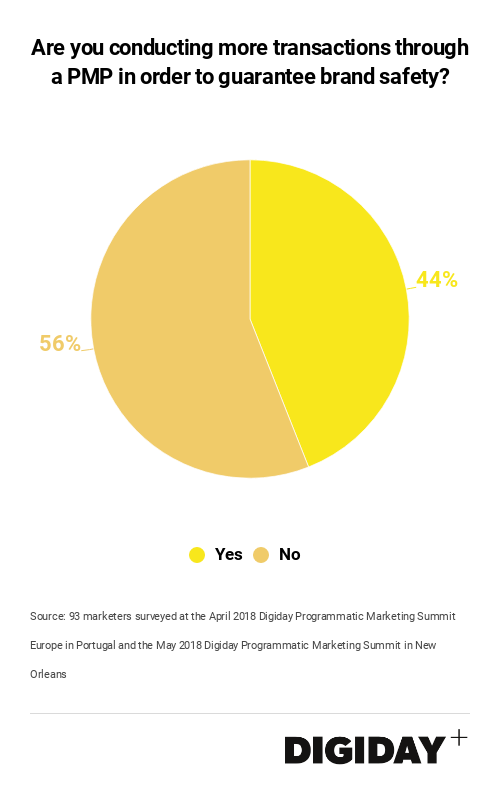 Brand safety concerns are still very much front and center for many major companies. Advertisers were one again caught next to obscene content on YouTube this year and JPMorgan Chase just hired its first chief media officer to lead its brand safety initiatives. But it appears companies have other priorities when electing to run campaigns through a PMP. Despite that, PMPs are are still riddled with issues, from lack of scale and high prices to a lack of audience targeting. Yet many advertisers pursue them because of the added layers of transparency they offer.

Depending on the type of ads purchased — be it display or video ads — advertisers might be more likely to use a PMP rather than an open exchange. A recent test by The Guardian found that only 28 percent of its budget for video ads in open exchanges reached its intended destination. If an advertiser isn’t bidding on ads.txt approved sites, then a PMP could be a powerful tool to guarantee the placement of costly video ads.