After cutting back site list in March, JPMorgan Chase has doubled the number of sites it advertises on in the past six months

The company declined an interview request, but a JPMorgan Chase spokesperson said the brand now runs ads on about 10,000 websites — still just 2.5 percent of its original, impossibly broad site list. Ad tracking firms show a similar trajectory. Although the company’s ads appear on more sites now than they did in the spring, the bank still runs ads in far fewer places than it did a year ago. What this indicates is that despite how they’re talked about at industry conferences, brand-safety tactics are malleable.

“The whole strategy is probably more fluid than the firm stance that has been talked and written about,” said Ken Van Every, senior business development manager at programmatic buying platform DataXu. “But the end goal is still the same, and it’s a good one to protect their brand.”

As seen in the chart below, which shows month-to-month percentage changes in the number of sites Chase has ads on, Pathmatics data also indicates the bank is running ads in more places since the Times report came out. 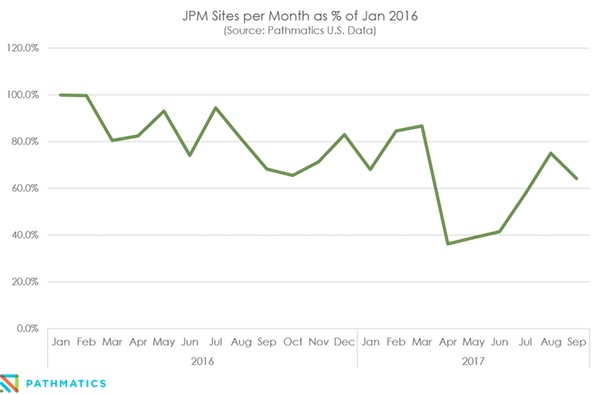 After the Times story began making the rounds within the media industry, the bank probably received a barrage of requests from publishers requesting that their sites be included on its whitelist, Van Every said. The expansion of the number of sites Chase runs ads on was likely an accommodation of these requests. Although cheap reach is appealing to most brands, a doubling of sites doesn’t necessarily increase reach by that much since the most popular sites (most of which were likely already included in Chase’s campaigns) have exponentially more traffic and inventory than long-tail sites, Van Every said.

Marc Goldberg, CEO of brand-safety firm Trust Metrics, said whitelists and blacklists need regular monitoring and updating in order to be effective, so it’s not that surprising to a see brand open up its campaigns to more sites after testing a new strategy.

“Neither a whitelist or blacklist is a static document designed to set and forget,” he said.