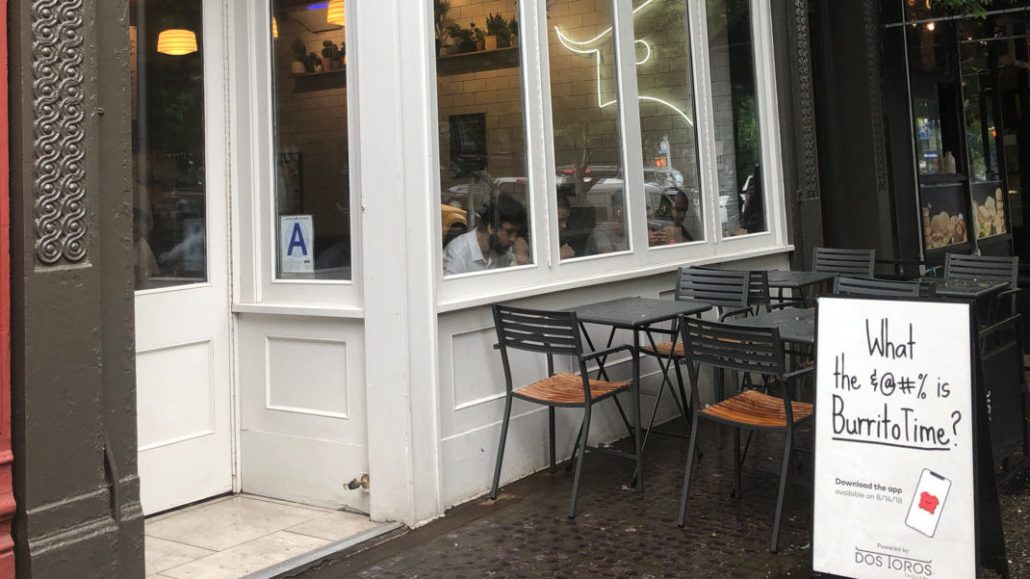 If it works for Supreme, why not for Dos Toros.

Starting Aug. 14, taco chain Dos Toros will be “dropping” burritos. Every day, at a random time, people who have the new “Burrito Time” app will receive a push notification. The first 10 people who open the app win and receive a virtual burrito card they can redeem at any Dos Toros location.

Founded in 2009 by two brothers from Berkeley, Calif. — Leo and Oliver Kremer — who were disappointed by New York City’s taqueria selection, Dos Toros offers a Mission-style burrito (ex. cheese melted on the tortilla first). Starting with one location in Union Square, Dos Toros now has 15 spots in NYC and 3 in Chicago. The new app is part of Dos Toros’ effort to push its “simple and fun” niche as it competes with much larger chains like Chipotle, Qdoba and Taco Bell. The instant win experience was inspired by the rise of HQ trivia.

“I’ve got to credit to HQ trivia. It’s the idea of owning somebody’s day, where people stopped whatever they were doing to spend time with an app. HQ trivia, without the questions. It’s a way to stay top of mind every day,” said Marcus Byrd, marketing manager of Dos Toros.

“Burrito Time” emerged from the executive team’s desire to create an app that didn’t mimic their competitors. Leo Kremer, co-CEO of Dos Toros, said they met with several agencies but were disappointed until they had a conversation with MSCHF, a Brooklyn-based agency known for its “quirky” activations (like Instacart’s Instacat Chrome extension).

To Kremer, MSCHF seemed like kindred spirits: “a young, weird team that likes to do quirky or almost absurd internet content to stir the pot and be a little playful.”

“Burrito Time felt like a fun way to do something exciting and simple,” he said.

Unlike traditional apps for fast-casual restaurants, the Burrito Time app doesn’t show a menu or allow for online ordering. It only directs to the Dos Toros website for locations and links to the official Instagram and the account for its mascot Pinto the Burrito. But the main element is Burrito Time, which includes a virtual wallet, a list of locations and an FAQ.

Dos Toros doesn’t have a formal rewards program, but it has done special deals before. For example, the taquerias gave away free guacamole on April 20 this year. Every time a new restaurant opens, they sell $1 burritos. Dos Toros also has physical burrito cards, mimicking a New York metro card that can be redeemed in-store.

The majority of its marketing — for this campaign and beyond — has happened in-store and on social. Over the last year, Dos Toros has grown its official Instagram from 12,000 to 40,600 followers. Pinto the Burrito — a burrito wrapped in tinfoil with Sharpie eyes and a mouth — has 123,000 followers thanks, in part, to Jerry Media.

Dos Toros also sends out email newsletters, which will include a blast about the new app. The company is distributing “several thousand stickers” featuring Snapcodes and QR codes that link to the app, Byrd said.

“We want to be taken very seriously in terms of our food and our cooking and our obsessive focus on burrito mastery. At the same time have a playful personality that’s thoughtful and funny. This whole thing is silly, and it’s okay to have fun,” Kremer said.

For now, Dos Toros is giving away 10 burritos a day. But in the future, the stores could give away guacamole or 100 burritos for Cinco de Mayo, for example, Kremer said. The company is also focused on selling its three hot sauces in bottles, which could be distributed wholesale through e-commerce sites or on the app.

Dos Toros also plans to launch more locations in a third and a fourth market over the next year.

“As much as we want to grow, we’ll never put growth ahead of quality. My brother and I have approached things from the guest perspectives, fewer markets so we can be more focused and promote from within. We’ll be spreading our wings a bit in some other places,” Kremer said.