The NewFronts have an IAB problem 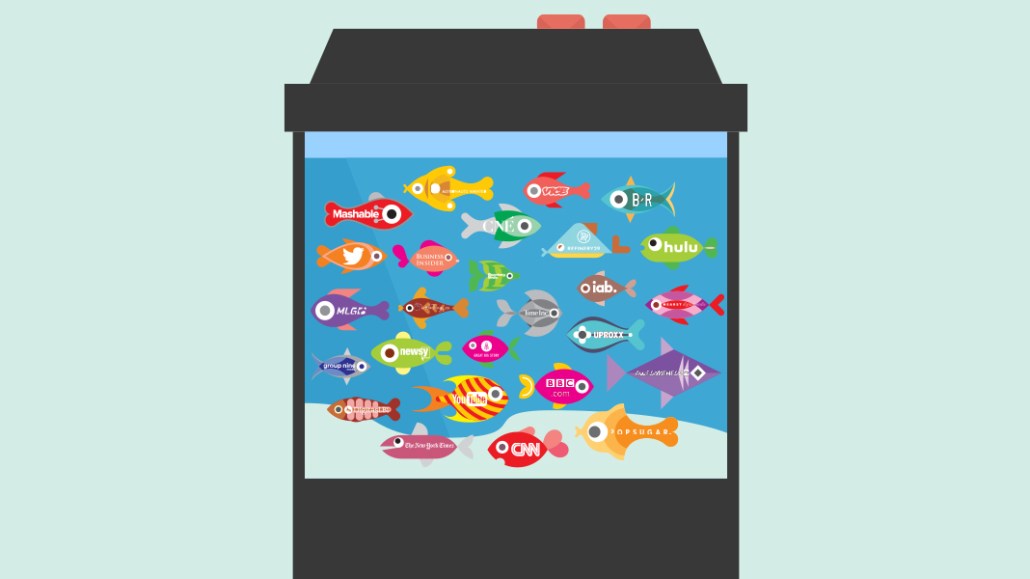 For two weeks in the spring, the NewFronts are the biggest ticket in town as digital media companies hold lavish events to lure digital ad dollars. But what was once considered a watershed moment for online video has since become a bloated affair, with 32 companies competing this year across two jam-packed weeks of official presentations — and even more unofficial private dinners and parties.

Multiple current and past NewFronts presenters say the Interactive Advertising Bureau, which organizes the official NewFronts calendar and accepts presenters in exchange for a five-figure fee, needs to do a better job programming the event.

“The one challenge for the NewFronts is that anyone can have one,” said Keith Richman, president of Defy Media, which held its fifth NewFronts presentation on Tuesday. “It’s two weeks of presentations, and it’s becoming overwhelming for the [media] partners and for the clients themselves.”

The IAB is a hands-off organizer
DigitasLBi is credited as the creator of the NewFronts. The Publicis-owned ad agency held the annual Digitas NewFront for five years before convincing YouTube, Hulu, AOL, Yahoo and Microsoft to help organize the first industrywide NewFronts in 2012. (Some of the original organizers including YouTube, Digitas and Hulu are still involved.)

The following year, the IAB took the reins, though there was some resistance among representatives of the six founding companies, sources said. Ultimately, the thinking was that for the NewFronts to grow as a showcase for the best video from the top publishers, digital sellers needed an independent party that had everyone’s best interests at heart. The IAB, with its hooks in almost every aspect of the digital media, technology and advertising ecosystems, seemed like the appropriate choice.

The IAB’s influence on the NewFronts grew from a silent party that participated in planning calls to eventually deciding which companies get to present during the NewFronts, according to two sources involved with organizing the NewFronts from the beginning. Early on, the founding partners had to approve anyone that’s added to the lineup. Along the way, the NewFronts went from roughly 15 media company presentations in 2012 to 32 this year.

Current and former NewFronts organizers argue that the IAB hasn’t done much outside of collecting a fee and hosting a calendar. This year, the fees are $30,000 for the first week and $10,000 for the second week.

Any company that’s willing to pay the fee gets to be on the calendar, which has diluted the NewFronts, sources said. (Case in point: Time Warner Cable and Zynga have presented at previous NewFronts — neither are premium digital video publishers. In other cases, smaller publishers that are not traditionally known as video publishers are invited into the fold.) And with a consistently long waiting list every year, the IAB has no trouble filling slots and collecting checks, sources said.

“They let in Time Warner Cable — a cable company — we had a fit about that,” said a longtime NewFronts organizer for AOL, which hosted a private dinner this year instead of a large presentation. “What are we paying to be a part of? It’s not curated anymore. There was no enforcement on what you could and couldn’t talk about.”

In an emailed statement, AOL CMO Allie Kline said, “The IAB is a tremendous partner and leader for the industry and all of us at AOL. We admire their ability to unite the diverse ecosystem and provide forums that help drive our industry’s future. We in no way pulled out of the NewFronts and in fact, had a great evening last night at our event. As the industry evolves and new players join the ranks, it is often the NewFronts that bring us together. We could not be prouder supporters of the IAB and the critically important work it does for media and technology around the globe.”

The IAB counters that it does have criteria for NewFronts presenters, the primary one being that the company has to be creating original, digital video content. That can be anything from long-form, TV-like shows to super-short social content. The fees help fund IAB research on the growth of digital video content and ad spend, which is released during the NewFronts. The IAB also uses the funds for marketing, operations and other organizational aspects for the NewFronts, the IAB said.

“We generate as much excitement [for the NewFronts] as we can,” said Anna Bager, svp and gm of mobile and video at the IAB. “We try not to meddle too much with the content, but we coach new presenters so they know what their presentations do. The process begins in September, and we work closely with the founding partners and the presenters. We are always there to help, but this is not the only job me or my team does.”

The hype is still there, and the IAB deserves some credit
Some current NewFronts presenters argue the IAB deserves credit for creating the hype around the NewFronts. Having a lot of people in the same place means a lot more can get done. While a few veteran NewFronts presenters, including AOL, Yahoo and BuzzFeed, scaled back on the NewFronts this year, hosting private dinners and meetings instead of flashy presentations, the hype is still there. Bager said the IAB expects “record” attendance this year. Digital buyers have privately expressed difficulty in getting into some NewFronts events.

“The IAB, in a relatively short period of time, has done a good job of making this somewhat of an event that everyone has to go to and talk about at least,” said Richman. “It’s become a convenient place for us to gather everybody and showcase the things that are valuable to us. And while there are not a billion dollars of business being transacted, the NewFronts have definitely led us to opportunities not only on the ad partnership side but on the syndication side on a global basis.”

“There may come a time when you have achieved a level of pervasiveness as a brand where you don’t have to do this,” said David Grant, president of PopSugar Studios. “But we don’t take it for granted that everyone understands us, especially if you’re a 55-year-old man [and ad buyer].”

One ad buyer and longtime NewFronts attendee offered a different interpretation of the attendance. “The NewFronts are still sold out because there is a lot of education that needs to happen. But that happens around the stages, instead of on the stages.”

In a crowded field, it’s hard to stand out
Still, even with everyone in town, there’s no question that a field of 32 presenters makes it more difficult for some media companies, especially smaller publishers, to get noticed.

“It’s almost like an Olympics sport, where you have 800 athletes from hundreds of countries competing, and it’s up to you to stand out,” said Suzanne Kolb, chief brand officer for Discovery-backed Group Nine Media, which is using the NewFronts this year as a coming-out party.

To some presenters, the growing size of the NewFronts field is the price of playing in digital video, which has become near-ubiquitous due to Facebook and other social platforms prioritizing the format. “People that critique the NewFronts are people that weren’t able to, or didn’t understand that to put up an an actual event, you not only need to devote time, money and energy into it, but you need to have something that’s differentiated,” said Richman. “It’s becoming self-regulating as people are dropping out. In a lot of ways, it becomes survival of the fittest.”

Meanwhile, the crowded schedule has the scaled-back approach gaining favor. “When you present to many in a big room, it’s sometimes hard to get people to pay attention,” said Madison Wojciechowski, senior director of digital and social media at sports and entertainment marketing agency United Entertainment Group.

Ultimately, the success of any NewFront presentation comes down to how well the publisher makes its case in a room full of (sometimes attentive) advertisers. And even then, with or without the IAB’s help, there is still no guarantee that some of this year’s presenters will play ball next year.

“I don’t know if we’ll make the same choice next year,” said Kolb. “This year, the benefits outweighed the concerns. There’s a great opportunity to take advantage of a lot of people being in town, but as our business keeps growing, next year we might have a different agenda.”

This article has been updated to include fees for this year’s NewFronts, as well as AOL’s official statement regarding the IAB and the NewFronts.