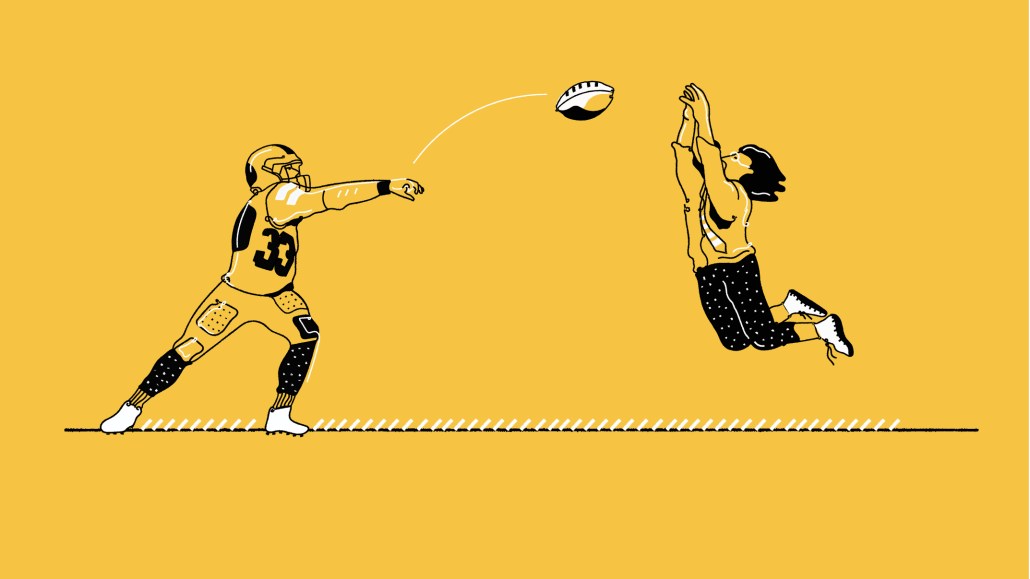 Stagwell this past weekend launched an augmented reality experience with the NFL’s Los Angeles Rams and SoFi Stadium as part of the team’s continued effort to lure fans back and keep them connected during games.

The in-stadium app is designed to be used during games in the venue to engage fans, especially younger ones, while they attend in-person. Now Stagwell is expanding it to an in-home AR experience for those watching from home as well. The NFL game features live AR effects, interactive content coordinated with touchdowns, player animations and other game-related prizes and contests.

“Football [is a] choreographed production,” said Josh Beatty, founder and CEO of ARound, Stagwell’s unit that is developing AR experiences for clients. “It is something happening all the time. So we first wanted to understand how we could fit into that experience, because what we don’t want to be is a distraction. We really want to be an addition in a way to create interaction with the gameday.”

The initiative is being spearheaded by ARound, which back in August first launched the AR platform with the Minnesota Twins at Target Field in Minneapolis. As with the Rams, the aim is to allow fans to experience a live setting through games and other immersive content and engage with others in the stadium.

ARound found that results with the Twins were promising, especially as baseball tends to have a lot of idle time throughout the game. In this case, the app did particularly well in attracting younger fans, Beatty said. While there is usually about 18 minutes of action in a baseball game, the average engagement time on the app was more than 25 minutes per fan, he added.

“When we came to the Twins, we quickly realized that one of the biggest challenges in sports is how to engage the younger fan especially,” Beatty told Digiday. “In baseball, where there’s just so much downtime and so much distraction, they’re competing with every form of entertainment. So with the Twins, we really focused our content on this younger audience.”

Stagwell is among many agencies developing AR and VR content as clients experiment with gaming, immersive experiences and other metaverse technologies. Augmented reality itself has been around for years – remember Pokémon Go? Some agree that integrated game advertising can particularly appeal to a younger generation, as is the case with video game channels like esports.

“Marketers should follow the channels where their users spend the most time,” said Mateusz Jędrocha, head of upper funnel solutions at marketing company RTB House. “It presents the brand in a non-intrusive way to reach audiences that are keen on learning new things, have high purchase power, and value brands that can speak their language. It’s especially important for reaching not only Gen Z, but also the wider population as gaming is more popular than ever.”

ARound, which is part of the Stagwell Marketing Cloud, uses 3D spatial computing to localize content for users at the venue. With the ARound Stadium app, fans can point their devices at the field and interact with different elements in the space. And for those viewing from home, the AR experience on gameday is mirrored with the events at SoFi Stadium, and they can join in on the games and live content as well.

The Rams’ 70,000-square-foot Infinity Screen will also show gameplay content in real-time with those AR effects, such as a touchdown or when the team enters the stadium. Additionally, some key players on the team, including Aaron Donald and Bobby Wagner, will get special animations.

ARound plans to eventually go beyond sports games and extend into other live events, such as music concerts, and connect it with more experiences at home. Beatty contends this type of platform can work with any place where people gather and want to amplify the live experience. He said this type of content is made for a world of short-form video entertainment.

“We really want to tackle all live events,” Beatty said. “We’re really tapping into something that couples education with excitement with entertainment, and we feel that that is really creating the basis for lifelong fandom.”

https://digiday.com/?p=479072
Most Read
Trending in Beyond Ads
Digiday Top Stories