‘The moment we’re in now is about being smart’: Mic aims to get paid to license video shows 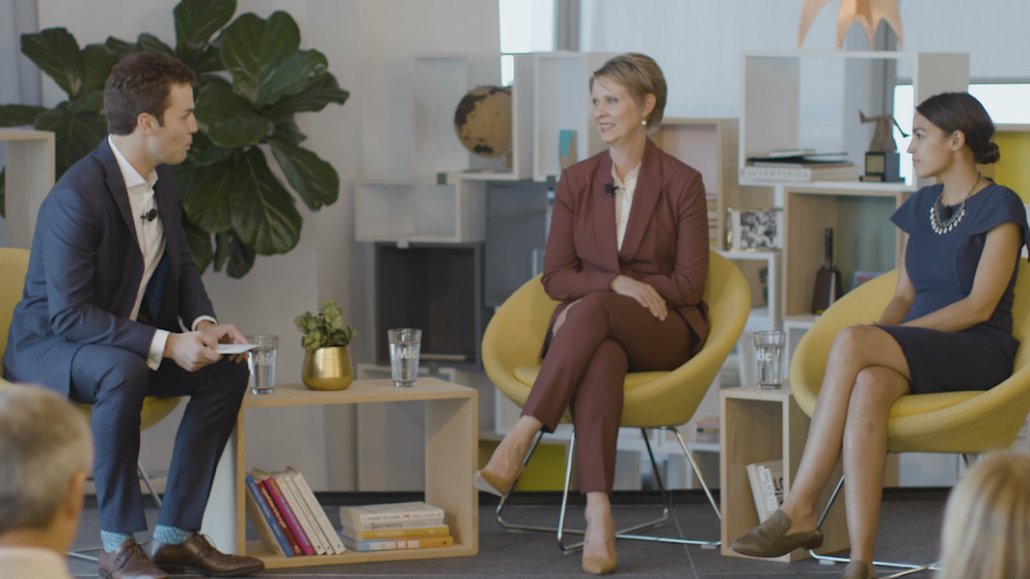 Earlier this summer, Mic premiered “Mic Dispatch,” a twice-weekly newsmagazine for Facebook Watch. The show is paid for by Facebook, which, as part of its funded news shows initiative, is paying news organizations ranging from CNN to Mic to produce daily and weekly video series for Facebook Watch. Many of these deals are for a year, as Digiday has previously reported. Then, in January, Hulu will premiere a three-part documentary based on the infamous Fyre Festival scandal, for which Mic will serve as a producer alongside Billboard, Cinemart and Hulu.

Mic publisher Cory Haik said the news outlet is in “active conversations” with other streaming giants including Netflix and Amazon for more potential projects based off of its journalism. It has also formed a unit called Mic Productions, which has a five people — including Haik, Mic CEO Chris Altchek and evp of strategy and development Sharmi Gandhi — focused on developing and selling long-form projects to streaming platforms and TV networks.

“If the era of early distributed media for publishers was to spray-feed everything, everywhere, the moment we are in now is more about being smart about how we create better relationships with platforms that are meaningful from not only an audience-reach perspective but also in terms of how we want to do great journalism and get an ROI from that journalism,” said Haik.

“Mic Dispatch” is the first example of the type of long-form work that the publisher wants to do, Haik said. The show, which is now more than one month and 10 episodes into its yearlong run, averages roughly 15 minutes per episode and features both studio interviews and field reporting from Mic journalists. Previous episodes have included high-profile interviews with New York gubernatorial candidate Cynthia Nixon, U.S. congressional candidate Alexandria Ocasio-Cortez and conservative commentator Candace Owens. It is produced by a team of 25 people.

Haik said a greater percentage of people are choosing to watch “Mic Dispatch” beyond the three-second view mark than for the type of short-form news-feed videos that Mic used to crank out. (Mic did not provide an exact percentage by press time.)

With other long-form content buyers, Mic is aiming to produce programs that follow a similar newsmagazine format of “Mic Dispatch,” as well as traditional documentaries focused on social justice issues and other key topics that Mic covers. Over the next couple of quarters, Haik said Mic will be announcing more long-form programs it’s producing for other platforms, but did not specify how many.

Mic’s shift to focus more on producing and selling long-form video to streaming video buyers is part of a change at the company to move away from short, news-feed clips that brought in a ton of Facebook reach but little revenue. The company said it hopes to get to a point where a third of its revenue comes from paid productions and licensing.

There certainly is an opportunity for Mic to produce or license long-form shows to different buyers. While Netflix has said that it’s not interested in hard-news shows, the company has been more willing to buy non-fiction and news-oriented shows from digital publishers including Vox Media and BuzzFeed News. Hulu also has bought a documentary film from BuzzFeed News. HBO, with its Emmy-winning show from Vice, has been the early poster child of these publisher-TV tie-ups.

One issue that Mic — and other publishers with long-form ambitions — will wrestle with is whether to become producers-for-hire for streaming and TV content buyers, which increasingly want to own the completed shows they’re paying for, or to find ways to license their productions without giving up all of the ownership rights. By producing for platforms, publishers can make money up front. If the publisher prefers to retain some ownership or distribution rights to the IP, then it might have to put up some production costs upfront, with the hope of making more money over a longer period time through licensing and syndication.

“Mic Dispatch” is completely paid for and owned by Facebook, which means Mic would not be able to license the show to other platforms down the road. The proper approach to IP ownership is something Mic is currently weighing as it tries to pursue more production and distribution deals with streaming giants and TV networks, Haik said.

“We are in the thick of doing those exercises around the different opportunities available to us,” she said. “Ultimately, it’s going to come down to what those opportunities are — and with the streamers starting to dip their toes into news, which they haven’t done before, it’s a good problem to have.”