Future of TV Briefing: How TikTok took over VidCon in 2022 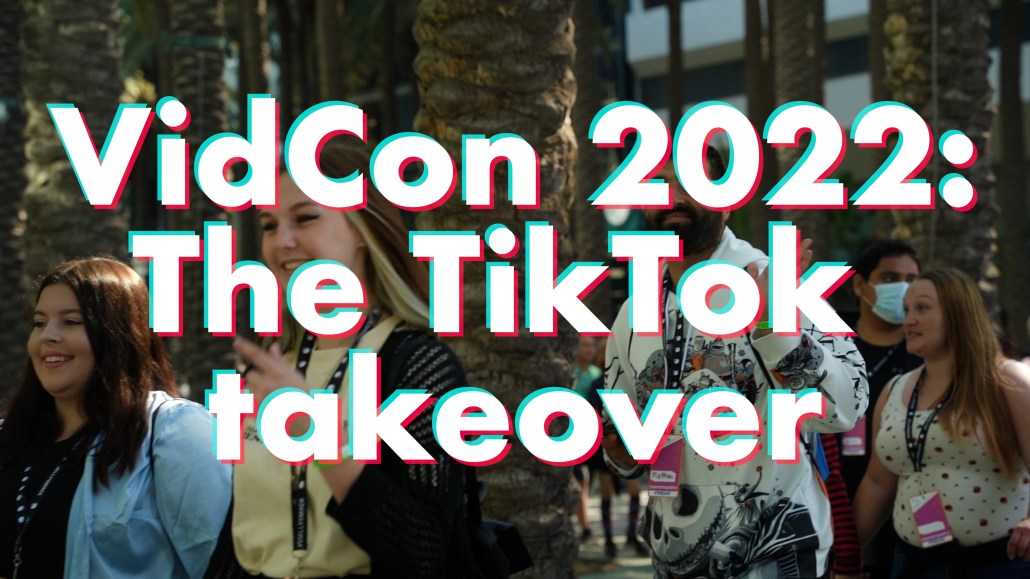 After a two year hiatus, VidCon returned to Anaheim, California, in late June, and the 2022 edition was a mix of Comic-Con for creators and their fans, a reunion for the digital video industry and a debutante ball for the creators — and one creator platform in particular — that stole the spotlight during the pandemic.

The 12-year-old annual gathering of the digital video crowd featured its usual hallmarks. Panels of industry executives talking about the latest trends. An expo hall for companies like VidCon owner Paramount to get their brands in front of the youth. Thousands of teens, tweens and twentysomethings — and their parents — lined up around the Anaheim Convention Center to see their favorite creators.

But there was one big difference. What was once an event dominated by YouTube has now been taken over by TikTok.

“The way that YouTube disrupted television, TikTok has disrupted all of these big incumbents that have and it’s so weird to have had VidCon around for both of those events,” said VidCon co-founder Hank Green on stage during the event’s opening session.

Having replaced YouTube this year as VidCon’s title sponsor, the ByteDance-owned digital video platform seemed to take full advantage by bringing a host of its top creators to the event and featuring a handful on stage during TikTok’s hourlong keynote session.

“TikTok sent us out here, and it’s been amazing,” said Emmanuel Duverneau, a creator with more than 3 million followers on TikTok. “I mean, it took care of the flights, the hotels. They made it really really simple for us [to] just give our information, and they have a whole back-end team that literally worked with us to make sure that we have a smooth process.”

During VidCon, Digiday spoke with various creators from TikTok, YouTube and Instagram as well as industry executives about what this year’s version of the annual event indicated about the state of the digital video industry and creator economy. For more, watch the video above.

“Our planning cycle is shorter right now because [TV’s scatter ad market] is so soft. We’ll probably do our agency deals in the middle of Q3 looking for fourth quarter [inventory].”

— Brad Geving, vp of media buying and operations at Tatari

People in the advertising and media industries love to talk about young audiences and what they do and don’t like to watch. But VidCon — the digital video industry’s version of Comic-Con — provides a venue to hear from teens, tweens and twentysomethings themselves.

In a video, more than a dozen Gen Z VidCon attendees share how they feel about TikTok and YouTube, why Instagram seems to be fading (or at least aging), which streaming services they prefer — and what the summer ahead could mean for these channels. “I wanted to spend my summer not on TikTok,” one attendee said. Watch above.

$482 million: Amount of money spent on YouTube video ads in the first quarter of 2022.

300: Number of job positions that Netflix cut last week in its latest round of layoffs.

1%: Percentage increase year-over-year in national TV ad spending in May 2022.

$75-90 million: How much money ESPN will pay per year to retain the rights for Formula 1.

Why Hoka is experimenting with connected TV in its first global campaign:

From Cannes Lions, wrestling with measurement, fraud and the ‘multiverse’:

Why esports companies are looking beyond competition as they invest more in live events:

Google and NBCUniversal vie for Netflix’s ads business:
The tech giant and TV network owner are the leading candidates at the moment to help Netflix stand up its advertising business, according to The Wall Street Journal. The talks suggest the streamer will initially rely on programmatic sales

Economic downturn comes for creators:
Digital video creators are starting to see the economic downturn disrupting their businesses, with brands canceling campaigns and affiliate revenues dipping, according to Insider.

Trans streamer turns Twitch into a news outlet:
Clara Sorrenti (a.k.a. “Keffals”) has used her Twitch channel to cover news and politics through an LGBTQ lens and has an audience 3,000 subscribers who pay $4.99 a month to support her, according to The Washington Post.

How products are placed in TV shows:
Product placements are far from new to the TV industry, but considering the spectrum of ad-free streaming services and the technology being developed to automatically place products in programming, this marketing tactic has received more interest in recent years, according to The New York Times.

How TikTok is threatening TV and streaming:
It’s been a few years since TikTok captured the zeitgeist, and yet traditional entertainment companies, including TV network owners, are still sorting out their strategies for how to handle the short-form video platform, according to Recode.