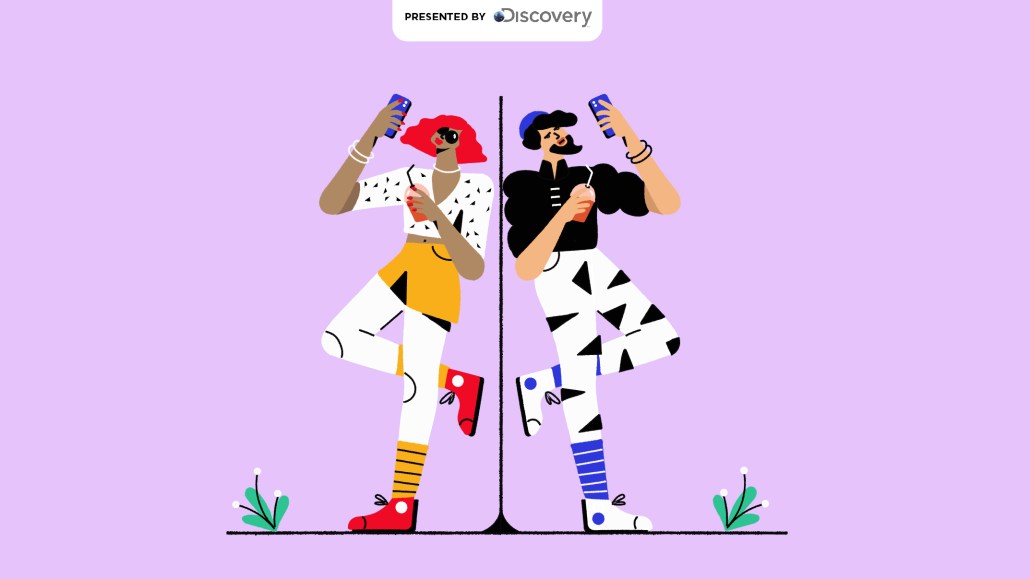 The third day of the Interactive Advertising Bureau’s four-day NewFronts this year returned the event to its digital and social video roots. After connected TV and cookieless targeting respectively dominated the first two days, creator-driven short-form shows shared on social platforms took the spotlight on May 5. Platforms and publishers also seized the opportunity to highlight the importance of diversity and inclusion — and, of course, to talk about cookieless targeting, too.

Peter Naylor, Snap’s vp of sales for the Americas, nailed down the buzzword of the NewFronts (in air quotes): “incremental.” Snap — as well as the other platforms and publishers that presented — emphasized that digital media companies can get advertisers to reach incremental audiences via online video content and CTV that they can’t reach via linear TV. Citing Nielsen data, Snap claimed that nearly 60% of Snapchat’s audience over 18-years-old watch less TV or no TV compared to non-Snapchat users.

During its presentation, Snap announced the launch of the Creator Marketplace, which allows brands to connect with top talent on the platform. The Creator Marketplace will open later this month to all brands, which can work with a select group of AR Creators through 2021 (200 million Snapchat users engage with augmented reality daily, according to the company). In early 2022, it will expand to an open marketplace that includes all Snap creators.

Snap also introduced a slate of nine new original shows. Vanessa Guthrie, head of Snap Originals, name-dropped celebrities who have shows on the platform like Jaden Smith, Kevin Hart and Ryan Reynolds, as well as Snapchat stars like Loren Gray, Nikita Dragun and Swae Lee. A new show called “The Me and You Show” lets Snapchats users use AR to take part in their own sketch comedy show with friends. Rapper Megan Thee Stallion will be a part of a new show about pets. A few new docu-series were also called out, like “Meme Mom” and “Lago Vista,” about a new mom, and the life of seven Texas high school seniors and recent grads, respectively. Unscripted series like “Coming Out” and “Charli vs. Dixie,” and scripted series that touch on social issues, mental health and climate change were also mentioned.

According to the presentation, Snap has 280 million users every day, an increase of 51 million, or 22%, year-over-year. In the first quarter of 2021, Snap grew revenue 66% year-over-year to $770 million, with over 50% of revenue from direct response advertising. Sean Mills, head of original content at Snap, said that over 400 million people watched shows on Snapchat last year, including over 90% of the Gen Z population in the US.

Demographic ad targeting is a “shallow and diminishing way to group human beings,” Vice Media Group’s chief people officer, Daisy Auger-Dominguez, said during Vice’s presentation. It was a strong message for the NewFronts: “end data discrimination.” Auger-Dominguez argued that advertisers should define audiences the way they would define themselves, “through values and passions, not age, ethnicity or sexual identity.”

With the cookie crumbling, Vice took the opportunity to announce a new contextual targeting solution as well, arguing that contextual data helped clients make more return on ad-supported goals by 289%. Advertisers can reach audiences with the solution based on sub-topics, sentiment, emotion and predictive models.

Vice also announced it will bring Google’s Web Stories product to all of VMG’s platforms, so that vertical, tappable video stories format will be featured across Vice, Vice News, Refinery29 and i-D’s web platforms. Publishers can decide where and how long content lives via Web Stories (an upgrade of Google’s AMP Stories format) and are in control of monetization: Advertisers can buy directly for a full screen custom format, programmatically or with branded content, according to Cory Haik, chief digital officer at VMG.

A focus for VMG this year is on Black and emerging creators, according to the presentation, which ran through a slew of programming on topics such as music, travel, food and relationships. Refinery29 will relaunch a sex education initiative for young people and invest more into the site Unbothered, aimed at Black millennial women.

Vice is also looking ahead to bring back in-person events. The theme for R29’s popular 29Rooms event franchise this year is “Make Contact.” It’ll be a party, with a “strategically shorter run time,” and performances and programming, according to Monica Herman, creative director at VMG. Unbothered will also host a gathering of young Black women. Music brand Noisey announced “Noisey Residency,” a fan experience that will include intimate live performances, and digital audience reach via video, merchandise and collaborations across Noisey’s channels.

VMG also launched its new brand identity — with a circular logo — alongside its new tagline, “What Happens Now.”

BuzzFeed returned to the NewFronts this year, its first time back since 2016. But this time, along with its robust verticals BuzzFeed News, Tasty and HuffPost, the publisher sported a diversified business that spans commerce, affiliate, products, licensing and a branded content studio to show off to advertisers.

CEO Jonah Peretti opened the short, 10-minute presentation by announcing that BuzzFeed is “looking at digital media acquisitions,” after buying HuffPost last November. As young consumers begin to re-emerge into the real world with the rollout of the COVID-19 vaccine, BuzzFeed can serve as “a guide” and “an inspiration engine for the modern consumer,” Peretti said.

BuzzFeed touted its first-party data suite Lighthouse, which launched in March, as a solution to the upcoming cookieless future, as well as the myriad data signals across its portfolio that can connect brands to its 104 million monthly users (and 3.2 billion monthly content views in the U.S.) via strategic segmentation, targeting and ad distribution. For example, the company determined from its data that someone reading food content is five times more likely to also search for parenting content. BuzzFeed emphasized its audience of shoppers — people who click on wishlists and shop certain categories of content that match their interests.

BuzzFeed also put a spotlight on its cast of BuzzFeed creators as well as verticals created for people’s hobbies and identities, such as Black-focused Cocoa Butter and Latinx-focused Pero Like. The presentation ended with a sizzle video, showing a couple engaging with BuzzFeed’s content in real life, from looking up recipes, taking on a DIY project, watching a suggested TV show and planning a road trip.

Twitter ran through a number of new and expanded content partnerships across a variety verticals like music and sports. Partners included Billboard, Genius, Refinery29, Tastemade, MLB, NBCUniversal, NHL and the WNBA. A deal with Tastemade, for example, will produce a new franchise called “Holiday Hotline,” where food influencers will answer Twitter users’ questions and issues around holiday meals in real time.

Linda Yaccarino, chairman of global advertising & partnerships at ‎NBCUniversal, made an appearance during Twitter’s presentation to discuss the two companies’ partnership; a big part of it will revolve around the Tokyo Olympics this July. Exclusive coverage, live highlights and a daily live show called “Talking Tokyo” (hosted by former Olympic figure skater Adam Rippon) will all be distributed on the platform.

Twitter also announced a new real-time chart created in partnership with Billboard, called “The Billboard Hot Trending powered by Twitter.” It will track music trends and songs talked about on the platform and will inform a daily video series highlighting those trends. Advertisers can sponsor the chart or content created around it.