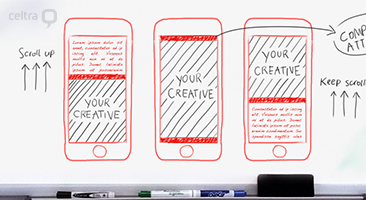 This article was written by Natan Nikolic, Director of Product at Celtra.

Every new medium is inevitably shaped by the forms of its closest predecessors. To establish more suitable conventions for its purpose we must first understand its nature and potential.

When the pioneers of commercial television set out to produce the first broadcasting programs, their vision reached as far as pointing a camera at faces behind a radio show. It took nearly 30 years for TV stations to make the first notable steps toward recognizing the potential of moving image and diverge from the radio paradigm.

Ways in which we package content and advertising on mobile was just as influenced by the personal computer as those on the TV were by radio and newsreels. Transplanting existing digital ad formats to a smaller screen was an efficient way to fill a gap in an exploding market and get business off the ground as quickly as possible. But opting for convenience also carried across challenges that desktop advertising never managed to overcome.

It’s no secret that desktop banner ads have never completely met the needs of brand advertising. On mobile’s smaller screens, the failings of unit size and aspect ratio even further exacerbated. Anyone who has ever struggled to make a good use of high quality assets — such as product shots of a new collection of apparel — will testify there’s simply not enough space for gloss within a 320×50 banner.

Expanding units proved as a good compensation for advertisers’ lack of mobile landing pages, but not for the lack of substantial space in direct contact with the audience. As it turns out, using small banners to engage users into a full experience is just as difficult on mobile as it is on desktop.

Interstitials that provide suitable proportions and real estate do so at the expense of users’ frustration and resentment, which ultimately defeats the purpose of a brand campaign.

The reason industry lacks more promising alternatives is a catch-22. More innovative ideas typically veer away from existing standards, which prevents them from reaching scale. Meanwhile, those who play by the rules are struggling within an outdated paradigm.

For nearly two decades, we have been reluctant to fully embrace the nature of the digital medium. As a result, we paralyzed innovation and haven’t seen any significant improvements in ad formats.

Make room for the next generation

To marry innovation and scale, we must first create a canvas large enough for storytelling. And considering the current state of affairs, we must rethink the “one ad size fits all” approach. Instead, formats must embrace responsive design and seize the maximum potential of each device and orientation. We need a larger and flexible canvas that doesn’t annoy users.

As long as they fulfill the mandatory requirement of clearly distinguishing ads from content, shouldn’t a format also strive to make the ad experience feel like a natural extension of the publisher? Traditional display formats — from full-page spreads to 30-second spots — tend to do precisely that. Pushing these boundaries can only be achieved by leveraging interaction. For example, the Telegraph Media Group recently debuted a new “Interscroller” ad format, a user-friendly interstitial that blends seamlessly with the reading experience.

As the name suggests, it uses the most basic and omnipresent gesture to reveal and dismiss the ad unit as well as gradually switch between the content and the ad experience. Some might consider such transitions as superfluous decoration, but when executed properly they create a buffer zone that makes the exposure to an ad seam less obtrusive.

Such interaction requires careful consideration of the unit’s position, not only within a page but also within the user’s journey. Interscroller was envisioned as a digital full-page break, and was therefore designed to perfectly fit with the reading experience of an article. It’s a nice bonus if a format can be used elsewhere, but focusing on a specific context eliminates many restrictions and opens space for innovation.

Perhaps most importantly, new formats stand a much better chance of penetrating the market if they are built on top of existing infrastructure. Lowering publisher’s efforts for integration is a much better strategy for adoption than relying on the novelty factor and its power to excite.

To serve many masters

If fulfilling these goals sounds challenging, that’s precisely because it is. What makes them exciting, though, are possibilities for interpretation. In the end, what matters in a format is its ability to bring advertiser’s, publisher’s and user’s interests closer to harmony.

Time and market will tell which big ideas will see themselves borrowed to whatever medium lies ahead of mobile. Those that do will ultimately make existing desktop transplants seem as outdated and quaint as those first television broadcasts.

https://digiday.com/?p=92155
Most Read
Trending in
Explore More from Digiday Media