‘Halloweed’: How US cannabis companies gear up for the holidays 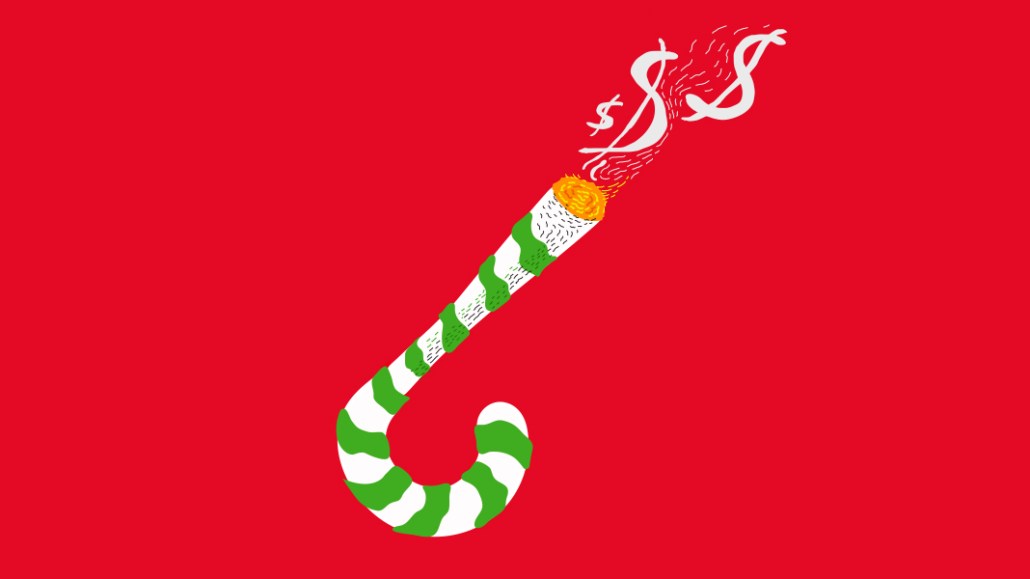 Cannabis companies are lighting up the holidays with seasonal promotions in an effort to build better customer relationships.

Dispensaries in states where marijuana is legal, like Colorado and Washington, are getting into the spirit as early as Halloween, or “Halloweed,” offering special promotions, like eighths for half-off and boxes of pre-rolled joints at deep discounts. Once the Christmas season swings into gear, manufacturers will pitch retailers joints packed inside plastic candy canes, THC-infused chocolate Santas and elf gummies that will get you high.

“The issue is not supply,” said Patrick Woods, CEO of Toronto-based Tormont Group, a company that pairs U.S. cannabis companies with Canadian retailers. “What it comes down to is how do stores compete with branding, and attract consumers to walk into the store?”

To drive foot traffic around the holidays, the U.S. marijuana industry — which generated $8.5 billion in revenue in 2017, according to The Arcview Group, and is projected to reach $23.4 billion by 2022 — is adopting some of retail’s most tried-and-true tactics, like special deals, novelty items and promotions. But these cannabis companies have a longer-term goal in mind: Mirroring a broader trend in the retail industry, they’re also leaning more heavily on customer loyalty programs, using the phone numbers and emails they have collected to get a better handle on customer data to promote more personalized products.

They’re capitalizing on a growing market: For the first time, more than half of U.S. and Canadian consumers of legal smoking age surveyed by the consulting firm A.T. Kearney said they would try a legal cannabis product, especially if it came from a “well-established” brand.

Though national quarterly data on marijuana sales is hard to come by, ancillary businesses — such as data analytics firms and seed-to-sale tracking operations — say sales tend to slow down around the holiday season. It’s unclear why, but some dispensaries curtail their hours in the winter.

Because data is scarce, companies that offer point-of-sale services to dispensaries, which track the purchasing habits of consumers, are valuable.

Ryan Hamlin, CEO of POSaBIT, which converts a credit card swipe into Bitcoin inside a dispensary, said individual stores have become more interested in tracking the spending habits of their customers as the industry has evolved.

Hamlin has two main sales pitches for convincing retailers to adopt his point-of-sale system. The first is that they can internally track real-time data of the purchasing habits of their customers. Then, they can access anonymized sales data about the industry as a whole — including their competitors.

Will Denman, CEO at the grower Solstice, said the company is stockpiling unique strains ahead of “Green Wednesday,” or the day before Thanksgiving, and in December will release a five-pack of pre-rolled joints packaged inside a plastic candy cane for $12 — a substantial discount.

“I’m really interested to better understand down to a strain-level who’s buying what,” said Denman. “It’s now a shotgun approach, and it’s not as targeted. As we mature and get more data next year, you’ll start to see more and more targeted and sophisticated promotional strategies.”

Denman said this year’s holiday promotions will be painted in broad strokes, and he hopes that next year better data will allow for more personalized promotions circa Christmas 2019.

Olivia Kemp, marketing coordinator for Terrapin Care Station, a dispensary chain with five locations in Colorado, said the company recently launched a program offering 10 percent off with proof of a voter registration card.

Future promotions centered around the holidays include a “Halloweed” run with steep discounts on joints and eighths, a Black Friday promotion and additional discounts closer to Christmas.

Though Kemp declined to disclose sales figures, she said Terrapin is “making efforts to surpass last year’s numbers,” adding that promotions are a part of that.

“It helps us maintain the customer relationship, solely because they’re good deals, so they know they’re going to come in and get quality product for a good price that keeps them coming back,” said Kemp.