WTF is Apple Pay vs. CurrentC? 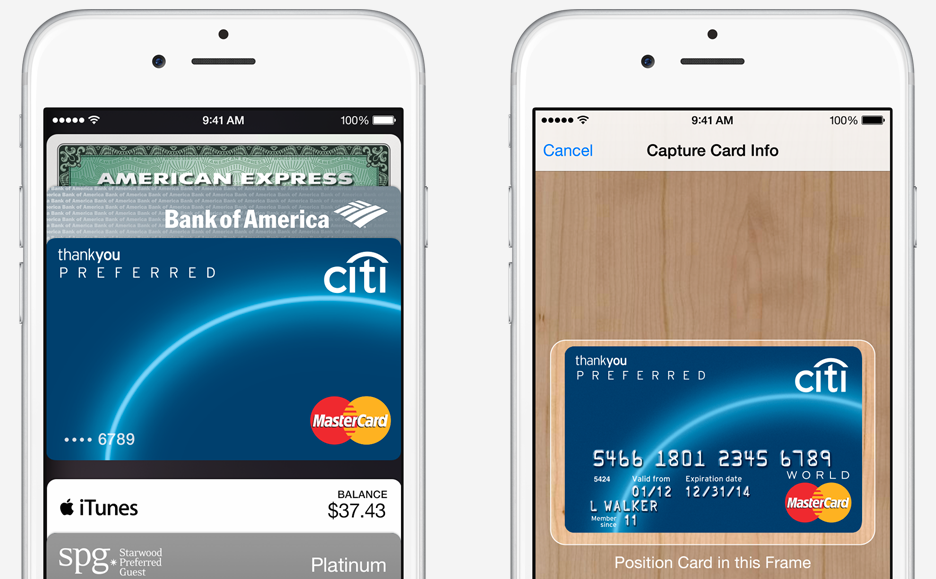 Apple Pay has had a tumultuous two weeks of existence.

The good: The mobile wallet, which allows people to use their iPhones to pay for items at select stores, was synced with more than 1 million credit cards in just three days, Apple CEO Tim Cook crowed on Monday. IPhone users were happily using it to buy Big Macs and Nikes, and all was well within the world of crass consumerism.

The not so good: A consortium of high-profile retailers known as Merchant Customer Exchange, or MCX, stopped accepting Apple Pay over the weekend, setting off a mobile payments rivalry between those merchants and Apple and Apple’s credit card partners.

What exactly is going on here, and why does it matter? Those answers, and more, below.

What is Apple Pay?
Apple Pay is Apple’s version of what is commonly known as a “digital wallet,” a smartphone-based alternative to old-school billfolds. With Apple Pay, iPhone users can save their credit and debit cards onto their phone and subsequently use their phones to purchase items in stores. The iPhone is placed near a register’s credit card reader, and the desired credit card information is transferred. Item paid.

Wow, this is amazing.
Easy. Digital wallets are hardly new — Google introduced its version in 2011, for example — but despite all of the “this is the future of purchasing!” bluster, digital wallets have thus far failed to attract mainstream attention. Apple Pay seems poised to change that, though.

What is Merchant Customer Exchange (MCX)?
MCX is a group of retailers — including large national chains Best Buy, Target, Sears and Walmart — that have banded together to create a competing mobile payments service called CurrentC (clever). CurrentC is not expected to be in market until 2015, but two of the retailers behind it, CVS and Rite Aid, have already stop accepting Apple Pay as a preemptive competitive measure.

How does CurrentC work?
Apple Pay digitizes credit cards; CurrentC proposes to be a digitized loyalty card-debit card hybrid. CurrentC purchases will be automatically deducted from users’ checking accounts, and users would be eligible for rewards from participating retailers. Unlike Apple Pay which uses near field communication, a technology that allows phones to communicate with other nearby devices, CurrentC is expected to use QR codes. (Good luck with that.)

Why do MCX retailers care how their products are paid for?
Because of big data, of course. One of the primary reasons retailers try to foist their loyalty cards upon you at the register is that they’re a way to collect valuable customer data. They’re typically linked to email addresses, and they collect data on the specific items a user purchases. Bridging a customer’s online data to his or her offline purchasing is a veritable gold mine for retail marketers. CurrentC would also allow retailers to circumvent credit card transaction fees. MCX retailers might also want to stake a claim in the growing mobile wallet industry, a $90 billion market come 2017, according to Forrester.

But doesn’t Apple collect data, too?
It appears not. “When you go to a physical location and use Apple Pay, Apple doesn’t know what you bought, where you bought it or how much you paid for it,” Apple’s svp of Internet software and services Eddie Cue said when introducing Apple Pay. But Apple is also working on integrating Apple Pay with iAd, its mobile ad network. That forthcoming feature will allow iPhone users to pay for items directly from mobile ads. Whether that will eventually allow iAd data to be matched with Apple Pay users’ in-store purchase data is unclear.

What does Apple say about all this?
Uh, it’s Apple, so that means not much. But it had this to say via a statement: “The feedback we are getting from customers and retailers about Apple Pay is overwhelmingly positive and enthusiastic. We are working to get as many merchants as possible to support this convenient, secure and private payment option for consumers. Many retailers have already seen the benefits and are delighting their customers at over 220,000 locations.”

Why is this such a big deal again?
Because Apple Pay is a way for Apple to make iPhones even more alluring to customers. If Apple Pay indeed makes checking out quicker, then Apple has a relative advantage over Google, its most immediate smartphone and digital wallet competitor. Merchants are essentially negating that. For retailers, CurrentC is a way to wrest control away from the Googles and Amazons of the world; tech companies that specialize in collecting consumer data and pose potential threats to brick-and-mortar retail.