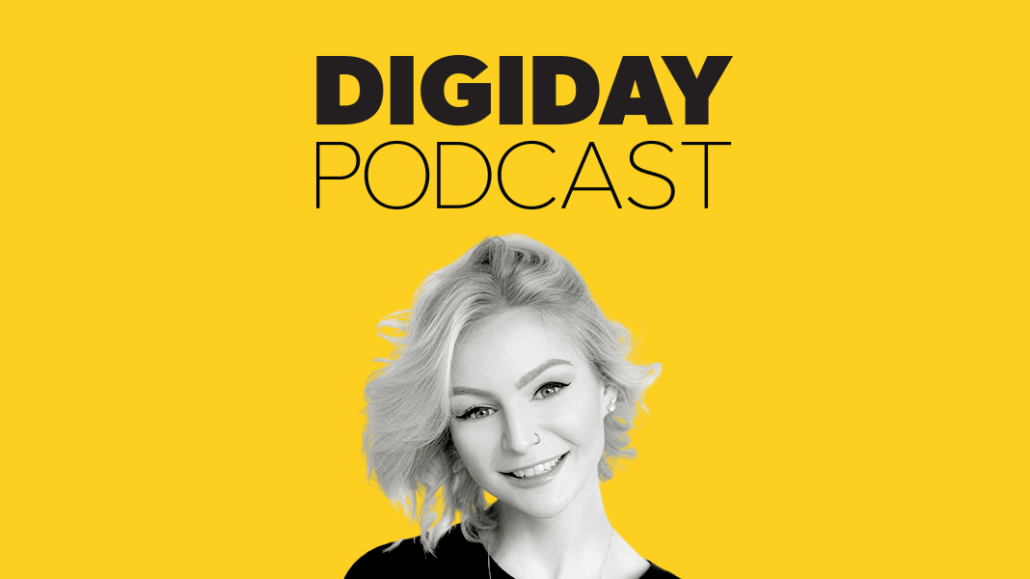 Kris Collins was working as a hairdresser at the onset of the pandemic in March 2020, and like so many others lost her job. But she soon found solace in posting content on TikTok that made her — and her fast-growing audience — laugh.

By July 1 that year, she hit 1 million followers on her TikTok page, @KallMeKris. Once that number quadrupled to 4 million, she decided to add YouTube into the mix to try and diversify her audience and give fans more long-form content.

“After that first million I thought it was going to stop [but] then it just kept going,” said Collins on the latest episode of the Digiday Podcast. “I think I was in a constant state of denial until I was over 10 million [followers] on TikTok.”

Now Collins has over 43 million followers on TikTok, 5.7 million subscribers on YouTube and almost 2 million followers on Instagram. Collins built her following without qualifying (as a Canadian) for TikTok’s creator fund, which made it all that more pressing to have direct brand deals across all three platforms. Those deals have become Collins’ primary source of income though she didn’t say how much she earns from brand deals, she discusses why she takes a calculated approach to which brands she works with and how many sponsored posts go up per week.

For the second episode in a limited series covering creators, Collins discussed how TikTok helped her rapid rise to stardom, how she’s been able to strategically balance brand deals with original content, and why jumping on TikTok trends isn’t the only means of building an audience.

Below are highlights from the conversation, lightly edited and condensed for readability.

I always write scripts, at least rough scripts, for TikTok especially, just because I do more sketch formats there, whether it’s like one to two or three-minute sketches. But usually, I’ll have somewhat of a schedule [and] I’ll try to space it out because I have around 30 to 35 characters and I have different storylines going on. One of my characters is Riley so if I do a Riley Tiktok, then the next one’s not going to be Riley, it’ll be onto a different character. And then I’ll do Riley in like a week or two.

And then the scriptwriting is a lot of brainstorming. I can’t even tell you how many voice memos and Post-it notes I have everywhere of random ideas I have. I have a Post-it note that says “sock” on it somewhere in my room, and I don’t even know what that means. But I’ll just base the script off of usually one punch line or one joke, and I’ll write it off of that. But yeah, it’s a lot of sitting around and looking at a wall because you can’t even watch TV or listen to anything while you’re trying to think of it.

Crowdsourcing ideas from the comments

I was a hairdresser before [TikTok] so I had all kinds of people walking through the door. That definitely gave me some ideas for characters. But people commenting, I go through my comments every day to see what people are liking, what people aren’t liking, what people are asking for and how I can represent people. I’d say probably half of my characters at least have come from my audience where somebody suggests, “Oh my god, you totally need a bro character,” and I’m like, “OK, I’ll make this character.” My audience has absolutely helped me get to where I am with my character development.

A TikToker that doesn’t use TikTok

I don’t do the trends too often — I usually focus on completely original content — but if there’s a trend that I think I can fit in or there’s a creator I want to highlight and duet, then then it’s good for me. As long as I can put some sort of original twist on it, I’ll do it. But honestly, and people might come at me for saying this, but I actually don’t watch TikTok that often because it’s my job and because I’m fully in it all the time. The only time I’m scrolling is if I literally have nothing else to do or it’s the wee hours of the night or just reading my comments or if people send stuff to me. Thank god for my friends because they’ll [share with me what’s] trending right now. But you get stuck in that hole and I know that the TikTok hole is not healthy.

A lot of brands haven’t experimented with TikTok or even Instagram. I find that a lot of brands are more attracted to YouTube. But I like making ads most for TikTok because I usually ask for full creative freedom with TikTok and I just make it into one of my skits essentially. YouTube is a little bit more difficult because I don’t really play with my characters on there as much so it needs to somehow be connected to the video in some regard.

https://digiday.com/?p=445467
Most Read
Trending in Publishing in the Platform Era
Digiday Top Stories