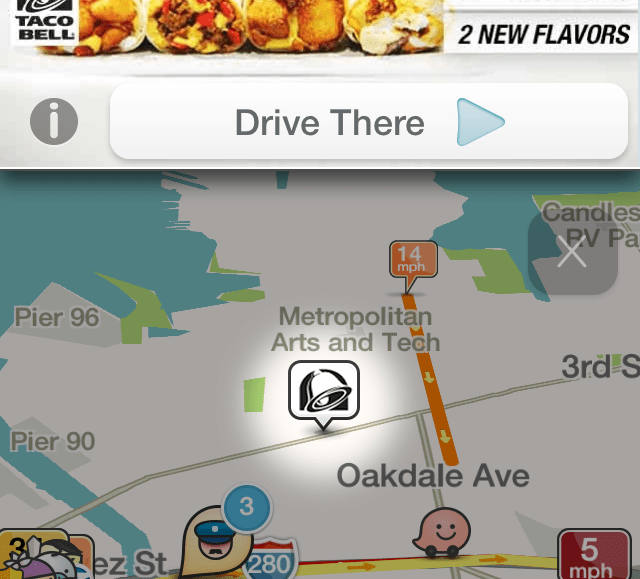 Unlike other recent billion-dollar Google acquisitions, crowdsourced navigation app Waze has potential to be a near-term moneymaker.

The app was acquired by Google in June 2013 for slightly less than $1 billion and has so far succeeded where so many other platforms and publishers have faltered: creating ads that are at times actually helpful and almost never annoying.

Waze crowdsources traffic information in order to tell users the quickest route from A to B. This narrow focus has drawn the attention of advertisers and drivers alike. Unlike other social networks, Waze isn’t designed to take advantage of its users’ leisure time. Waze’s stated goal is to shave 10 minutes off any car ride. After spending 2013 convincing brands to run test campaigns on its platform, Waze’s head of U.S. sales Jordan Grossman is spending the first part of 2014 locking them in for extended ad deals with the promise that it can often drive people right to a marketer’s doorstep.

Taco Bell, for instance, used Waze this past fall to sell its Taco 12 Packs, according to Eric Perko, media director at

DigitasLBi, Taco Bell’s digital agency. Taco Bell placed ads on Waze for the 12 Pack each Saturday morning with the thinking that people using Waze at that time were likely on their way to watch college football. Because the 12 Pack is ideal for a football party, it seemed a natural fit, Perko said.

The campaign was so successful that Taco Bell eventually extended it to Sundays for NFL games and for the launch of its Cool Ranch Doritos Locos Taco. “They’ve been a big partner for us the past 14 months,” Perko said. “And we’re looking to partner more with them in the future.”

Waze has turned brands like British Petroleum, Home Depot and Taco Bell into believers; all three went from experimenting with Waze last year to establishing lasting ad partnerships in 2014, Grossman said. Other retailers like Best Buy and Lowe’s are considering similar extensions through 2014, Grossman said, as is Mondelez-owned gum brand Stride.

Ads appear on Waze as physical destinations on a map. Clicking through will get you directions to, say, the nearest Taco Bell. Grossman boasted that on average, 3 percent of users who see an ad not only click on it, but express purchase intent by hitting the “Drive There” button. That number is especially impressive considering that the average click-through rate for a retail mobile banner ad is 0.52 percent, according to a December MediaMind study provided by eMarketer.

“When you have a purpose-driven, location-based app like Waze, it’s relatively easy to attract advertisers that want to reach this audience,” said Mahi de Silva, CEO of mobile ad network Opera Mediaworks.

Platforms with a dedicated user base usually risk a backlash when they introduce advertising into their streams, but Waze has gone unscathed. Its number of mobile unique visitors went from more than 2.9 million in Dec. 2012 to more than 4.3 million in Dec. 2013, a 46.8 percent jump, according to comScore. (Grossman placed Waze’s U.S. uniques at approximately 10 million.)

“Three-quarters of Waze sessions are during commuter hours, so most users aren’t going to reroute,” Grossman said. In these cases, advertisers can take opt to place a “Save for Later” ad. When engaged, these ads send information to users’ Waze inboxes, where they opened after driving sessions. Universal Pictures used these ads to promote its new comedy film “Ride Along” and Home Depot uses them to drive app installs.

Google is treading lightly with Waze. It is not pushing its ads yet into the app, allowing Waze instead to figure out for itself what types of ads work best for its audience. Like all platforms, that means Waze is trying to find its native ad placement.

Convincing users to not only tolerate an ad when they’re trying to drive to a specific location but to alter their route altogether just to stop at a drive-thru is a difficult task. The key is making advertisers’ destination pins no farther than six miles away from a user’s current location and targeted based upon time of day. Putting an ad right where people are likely to interact with it — like in the directions search screen, or looking at traffic patterns — is key to Waze’s ability to drive foot traffic to its advertisers, de Silva said.