How Snapchat is courting direct-response marketers 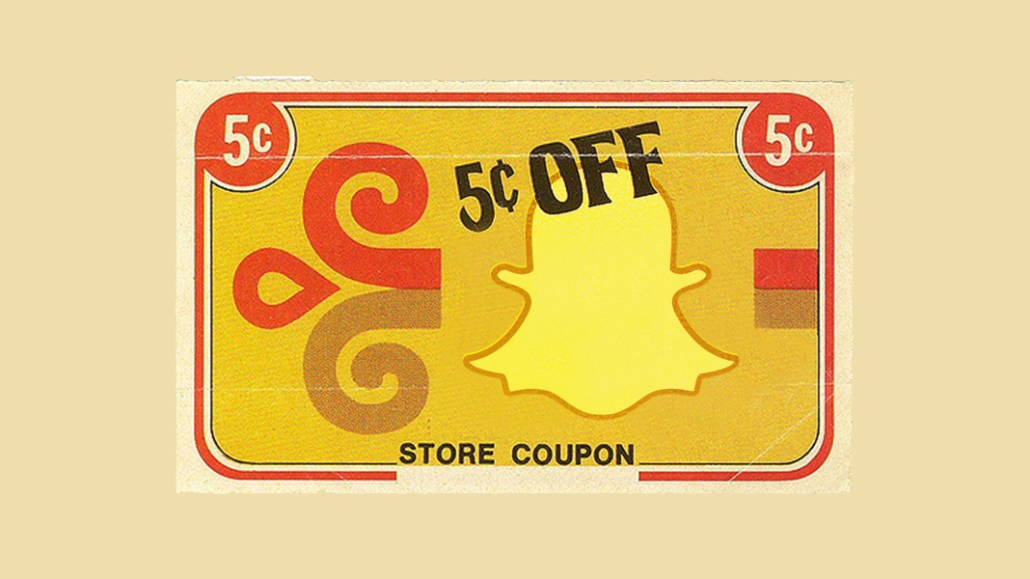 Snapchat is making a bigger play for direct-response budgets, and brands are taking notice.

Ad executives have noticed a change in tack when Snapchat pitches its ad business. The platform isn’t just interested in creative budgets, and its commercial team isn’t focused on using reach and impressions to sell ads. There’s more emphasis on how formats like videos and geofilters can be optimized to drive business goals, such as app installs and even sales in some cases. For Snapchat, chasing direct-response budgets is part of a wider play to get media planners to give it a permanent place on media plans.

Snapchat has been courting media planners through its certified partner program, which is based on media spend, according to an ad buyer. Agencies are given virtual badges — gold, silver and bronze — based on how much they spend. The more budget they commit to Snapchat, the more support they get from its creative and development teams, the executive said. Direct response, according to the executive, is a recurring theme in those discussions because more brands are testing whether Snapchat drives business goals. (Snapchat did not respond in time with comments for this story.)

As a performance-led advertiser, Skyscanner has always wanted Snapchat ads for direct response rather than brand building. After several tests, Skyscanner hasn’t made the platform an always-on part of its media plan, but what it has seen is encouraging. When the search engine has run localized videos on Snapchat that feature the most popular holiday destinations in a specific market, the cost per impression on those posts has been three times lower than when it hasn’t used localized creative, while the swipe-up rate to download the Skyscanner app has doubled, according to Anna Derezinska, who heads up the advertiser’s paid marketing.

Now, Derezinska and her team are examining what happens after a Snapchat user installs the Skyscanner app. The number of Snapchat users who installed the app after viewing the video is “quite high” and comparable to the engagement rates on other platforms like Facebook and Google, Derezinska said.

While app installs are a start, eBay believes its direct-response ads on Snapchat could eventually drive sales. The retailer will test app install ads on Snapchat in the coming months before testing ads that drive other performance objectives. Snapchat and eBay plan to share engineering skills and data science services with the hope that they can make e-commerce work at scale on the app. While Snapchat is already working on e-commerce services, eBay will use its own resources to fund prototype products that allow it to optimize to other direct-response goals.

Snapchat is an important part of eBay’s media plan, said Gareth Jones, senior marketing director at eBay. Yet eBay has reservations about how much budget it will commit to the ads business in its current state.

“We want dynamic APIs and a solution that gives us efficiency, scale and efficiency, which is measured through a standard suite of direct-response metrics,” he said. “How they integrate those products elegantly into the experience probably still needs a huge amount of work.”

Direct response for Adidas is more of a long-term goal than an immediate priority, as its buying strategy for Snapchat is optimized toward effectiveness. It may not be as far down the direct-response funnel as eBay, but Adidas is working with Snapchat and other third parties to gauge how its ads influence brand awareness, brand favorability and ultimately purchase intent. Play time is another Snapchat metric Adidas tracks, given more of its media budget for the app is spent on sponsored lenses, which use augmented reality to enhance users’ surroundings. Last month, Adidas created a lens for its Deerupt trainer. Promoting its products on Snapchat this way gives people a chance to play around with wearing them and allows users to share the experience with friends. Like eBay, Adidas is working to determine whether play time is driving purchases, said Chris Watt, Adidas’ senior social media manager.