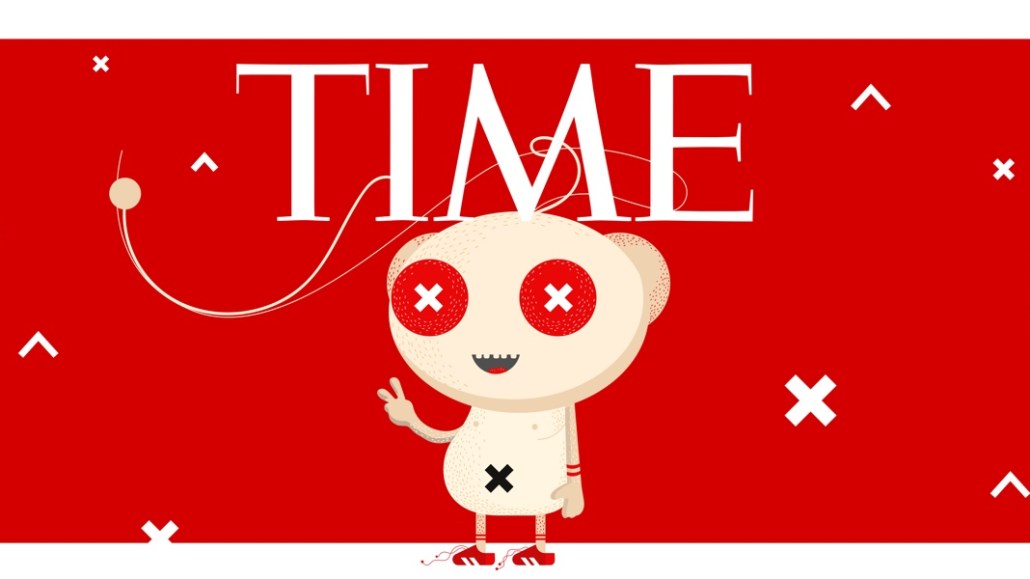 Time magazine has a new, formalized source of inspiration for stories. On Oct. 12, the Time Inc. flagship is announcing an editorial partnership with Reddit, the community and platform that has helped and flummoxed publishers for years.

Through the partnership, Reddit staffers will help find and flag original stories written by Reddit community members for Time editors, who will tell those stories and compile the results in an article series that will publish every Thursday. The posts will be distributed on Time’s owned and operated properties, its Reddit profile page and Apple News.

In the past year, Reddit has formed partnerships with companies including CrowdTangle and Taboola, as well as publishers including The Washington Post. Meanwhile, Time’s parent, Time Inc., is scrambling to cut costs, reportedly planning to cut the publishing frequency of titles like Fortune and Sports Illustrated, while also trying to offer digital publishers the chance to create print editions of their own products. Neither side would comment on whether there is a financial dimension to the partnership.

“We have opportunities to grow each other’s audiences,” said Alexandra Riccomini, Reddit’s director of business development and media partnerships.

Publishers big and small have spent years mining Reddit for stories. Gawker famously feuded with Reddit’s community over the perception that Gawker staffers relied too heavily on the platform to surface stories they later aggregated. To this day, most digital journalists are constantly prowling Reddit’s 140,000 active subreddits looking for viral story fodder, Alexis Ohanian said on a recent Digiday podcast.

This partnership is different. Rather than surfacing stories from other websites or posts from ill-lit corners of the internet, members of Reddit’s community team will help flag top-performing original posts published by Reddit users, with a special focus on content that does not fit into any of the established lists that Time’s competitors might access through CrowdTangle. Those community specialists will also connect those Reddit users to Time editors to help the editors secure permission to use photographs or other media created by those Reddit users.

“We really wanted to find a way to leverage the user-generated content from their community,” said Brittany Robins, engagement editor for Time Inc.’s Time, Fortune and Money.

For much of the past decade, Reddit has played a unique role in the digital media ecosystem. It has long been a top-10 source of referral traffic for publishers globally, according to Parse.ly data, routinely topping much larger platforms like LinkedIn. Historically, Robins said, it has been a top-five source of social traffic for Time.

Yet overall, the flow of referral traffic has been unpredictable for publishers. Unlike other platforms where publishers can set up their own accounts and pump as much content into the platforms as they wish, Reddit’s community would actively police publishers that tried to spam its ecosystem, either by downvoting the content or getting the publisher’s user accounts banned.

That has begun to change. Over the summer, it created the option for publishers to create profile pages on its platform, a program it launched in open beta with Time, The Washington Post and AL.com. It also began allowing users to upload native video to its platform, an opportunity Time has embraced: A video it uploaded this summer about the history of solar eclipses remains one of Reddit’s most popular uploaded videos.

Reddit’s partnerships with Taboola and CrowdTangle also give publishers greater visibility into how content performs inside Reddit’s labyrinthine ecosystem. “We’ve been making an effort, holistically, to engage more with publishers,” Riccomini said.

While Time’s coverage of national affairs has historically defined the brand, its current audience seems more interested in stories that emerge from the internet. A recent story, which happened to be sourced from Reddit, about a grandmother who bears a striking resemblance to actress Scarlett Johansson became one of the publisher’s top-performing posts of the year.

As two websites looking to diversify their audiences, Reddit and Time are an excellent match. The former’s audience is 62 percent male, and more than two-thirds of its visitors are under the age of 34, while the latter’s audience is 60 percent female, and nearly two-thirds of its visitors are over the age of 35. Both sites attract 47 million unique U.S. visitors per month, all according to comScore data; Reddit claims a global audience of 330 million.

As the partnership develops, Robins said the stories Reddit unearths could serve as the raw material for a video project or another multimedia effort. “This is our passion project,” she said. “We’re just going to see where it goes.”