How Mountain Dew is experimenting with 360-degree video 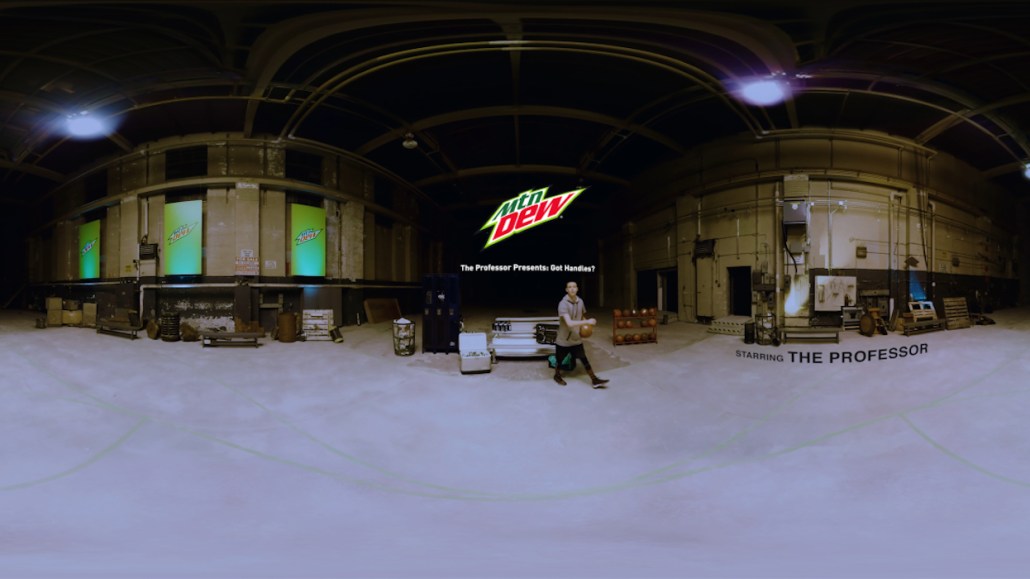 PepsiCo’s marketers for its Mountain Dew brand aren’t getting carried away after seeing a 360-degree video campaign from earlier this year generate more click-throughs than some mobile video campaigns.

Working with streetball star Grayson “The Professor” Boucher, Mountain Dew ran the #GotHandles campaign, a game that let fans try to complete a series of Boucher’s moves in virtual reality. To promote the game, which launched on Oculus, Samsung and HTC VR devices, the drinks company ran a 360-degree trailer across ad platform Immersv’s network of publishers that either sold 360-degree inventory or had a VR app, including Condé Nast and Meredith.

Mountain Dew’s video was viewed more than 100,000 times between July 31 and Aug. 31, according to Kate Brady, director of media strategy and consumer engagement at PepsiCo. More than six in 10 people (63 percent) who saw the ad completed it, and it had a 22 percent click-through rate, per Immersv. For comparison, the average click-through rate for mobile video ad campaigns is a mere 1 percent, according to research that video marketing platform Innovid conducted last year.

It’s difficult to compare traditional video with 360-degree video, as the ad format is completely dependent on the audience, how the audience consumes content, the brand, the category and the idea or content itself, said James Britton, global managing director at Stink Studios. “If you were targeting [retirees 65 or older], then traditional video might be more effective, whereas if you were targeting teenage mobile gamers, then a 360 experience might be more effective,” Britton said. “But most importantly, it depends on what works best for the idea.”

Mountain Dew’s ongoing work with the video games industry, including with Microsoft Xbox and Sony PlayStation, is the clearest way for it to figure out whether there’s more to 360-degree ads than the hype. This is particularly true of whether that format could be used as a stepping stone to the more complex but potentially more rewarding VR ads.

The advertiser has nurtured partnerships with both Sony’s and Microsoft’s gaming consoles over the past several years and more recently has used those deals to explore VR. Mountain Dew started testing VR in early 2014 and has produced several campaigns that play with the format, ranging from full-blown experiences for products such as the Oculus Rift to earlier tests with 360-degree video on YouTube.

Brady said the soda brand would “lean in” further to VR ad campaigns moving forward, adding that VR will be an $80 billion market by 2025, so the advertiser is trying to get a foothold in the format now.