Jezebel exposes the Achilles heel of being a platisher 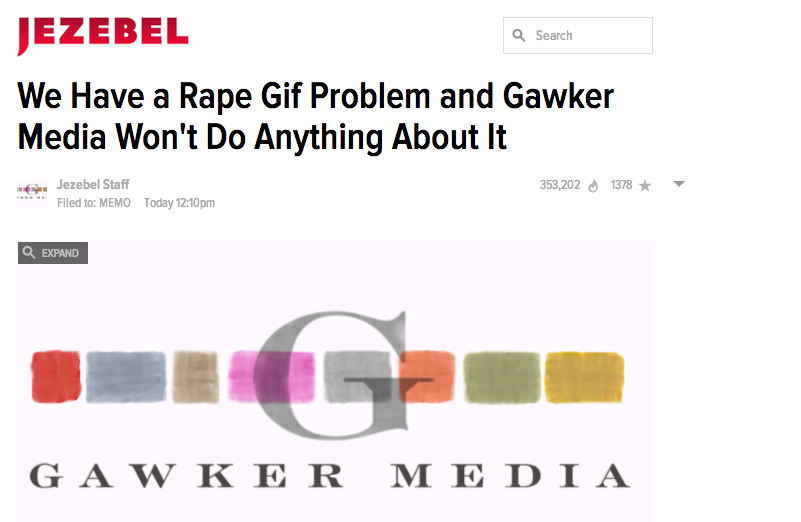 The sexiest, most lucrative thing in publishing today is to not be just a publisher at all. It’s far more valuable to be a “technology company” that happens to produce media, or, at the very least, a “platisher,” a digital media entity that combines the editorial authority of publishing with the openness of a consumer-facing platform, where ostensibly anyone can make a meaningful contribution to the reporting, analysis and discussion of a certain subject.

But Gawker Media experienced the downside of being a platisher on Monday when it was thoroughly criticized for not policing its comments sections vigilantly enough. The critique did not come from a commenter, however, but from Gawker’s own Jezebel.

Jezebel, a Gawker-owned-and-operated site dedicated to covering women’s issues, publicly excoriated Gawker management and product executives in a blog post published Monday titled, in provocative Gawker fashion, “We Have a Rape Gif Problem and Gawker Media Won’t Do Anything About It.” The post took Gawker management to task for failing to help prevent commenters from posting GIFs “of violent pornography in the discussion section of stories on Jezebel.”

The kerfuffle within Gawker’s own ranks illustrates the conflicting incentives of trying to simultaneously uphold editorial standards as a publisher (a job that is at least in part about choosing what not to publish) while embracing openness as a platform (which leaves those standards vulnerable to determined trolls).

“This weekend, the user or users have escalated to gory images of bloody injuries emblazoned with the Jezebel logo,” Jezebel news editor Erin Ryan wrote in the post. “It’s like playing whack-a-mole with a sociopathic Hydra.”

Gawker is one of the few publishers to have elevated comments — often the Internet’s cesspool — to something additive for readers. Gawker heavily relies on anonymous tips for scoops and values anonymous comments. Hosting offensive pornography doesn’t advance that goal.

“We’ll accept some disorder if that’s the price of freedom in one’s personal life, in politics and the press,” Gawker founder and proprietor Nick Denton wrote in an April 2012 blog post about Gawker’s embrace of anonymous comments.

Kinja, Gawker’s publishing and commenting system, allows visitors to post comments anonymously from “burner” accounts. A person or people had been using burner accounts to post the troubling images “for months,” prompting Jezebel editors to bring it to the attention of Gawker’s product team and editorial director Joel Johnson.

But Gawker management apparently did not pay those complaints much heed. So when the offending commenters escalated their behavior to posting simply violent images, Jezebel’s staff decided to take matters into its collective hands and lambaste Gawker Media on one of its most prominent properties.

“I had no idea it would go as crazy as it did,” Ryan told Digiday.

The images were not only offensive to Jezebel’s readers, Ryan said, but to its editors who are tasked with moderating the comments sections of their stories. Having to look at and root out hardcore pornography is not a Gawker editor’s job description.

It’s a brave move to publicly criticize your employer on your employer’s own website, but the response, both externally and internally, has been largely positive, Ryan said. It was ranked No. 2 as of 4 p.m. Monday on Gawker’s infamous leaderboard with 4,100 concurrent views, she said, with readers overwhelmingly supporting Jezebel’s side.

More important, she said, the post has made remedying the problem a priority. Gawker staff and product execs are currently discussing how to best address the issue, although there is no concrete plan in place yet, according to Johnson.

Johnson added that while he and Denton knew about the Jezebel staffers’ concerns, it was his responsibility to handle the situation. Denton did not return a request for comment at time of press.

Ryan still supports hosting user comments, even anonymous ones, from Kinja. Ryan was herself a prolific Gawker commenter before she was noticed by the site’s editors and hired to write for Jezebel.

“There are all kinds of positives to our commenting community, but it only takes a couple bad ones to make the experience significantly worse. I think it illustrates that the Web has some growing up to do and needs to figure out a balance between the safety of confessing something anonymously versus accountability that comes with having a name and identity tied to your Web presence,” Ryan said.

Readers of other Gawker sites can still get their share of violence, though: The post beating out Jezebel’s call for institutional reform on Monday afternoon in terms of pageviews was a video posted to Deadspin of NASCAR driver Tony Stewart fatally striking a man with his car.