How digital news publishers will compete for political ad dollars in this year’s U.S. midterm elections 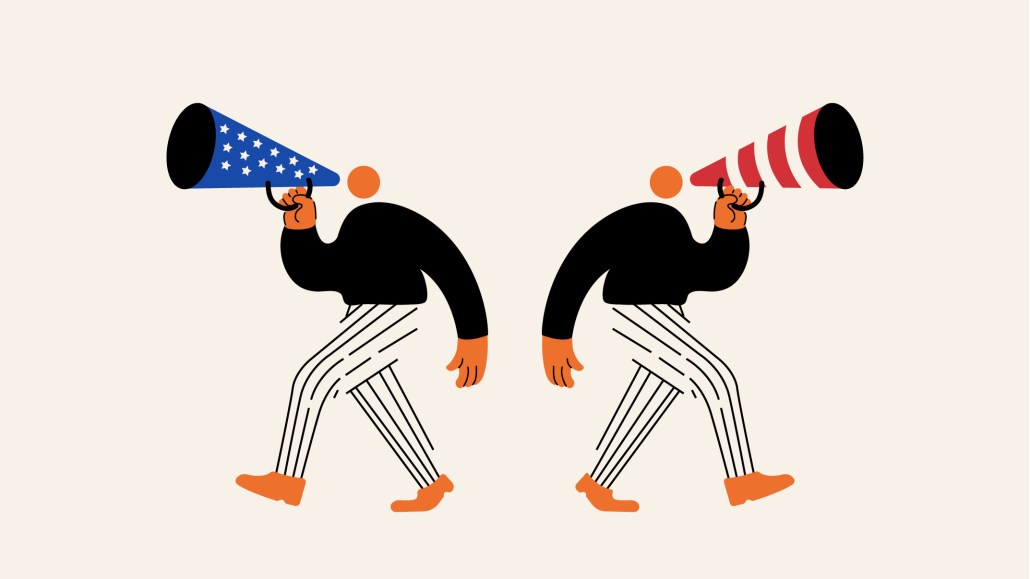 The U.S. midterm elections this November are expected to draw a historic amount of political advertising spend — most of it is projected to go to TV and video streaming services. So where does that leave digital news outlets?

While some news publishers have policies against accepting political ads, others count on an election season for a boost in ad revenue. This year’s midterms are expected to surpass $9 billion across broadcast, cable, streaming and digital platforms, according to projections by political ad tracking firm AdImpact — the most spent in a midterm election year (political ad spend hit over $3.9 billion in 2018).

The biggest pieces of the pie appear to be going to local broadcast TV stations, and nearly half of digital ad dollars are projected to be spent on connected TV.

“It’s really a distinct group of news publishers that are going to be able to activate political,” said one marketing and sales executive who has worked at major digital news publishers. And because the surge of spending is mostly happening in the broadcast and streaming space, political advertising “may buoy some” in the third and fourth quarters this year, “but it will not buoy digital publishing altogether,” they added.

“If we’re trying to reach an informed target group, people who are highly educated, then news sites would have a place,” said Megan Clasen, partner at Gambit Strategies, a digital ad agency for Democratic candidates. And the more digital budgets grow, “the higher the chances are that the publishers we are working with will expand,” she added.

While political ad dollars move into streaming, inventory is scarce and more expensive than buying with publishers. Some streaming ad inventory in Illinois is already sold out through election day, said Courtney Weaver, vp of political accounts at IMGE.

Political ad CPMs for streaming range from $35 to $65, whereas news publishers’ ad inventory CPMs range from $10 to $25, said Weaver.

If streaming advertising is expensive in a specific market, for example, Republican digital agency IMGE will “fill those holes and gaps to maximize budget and impact,” and buying programmatic ads on news outlets’ sites and publishing on social have a “big role in terms of filling those gaps,” Weaver said.

Clasen agreed: “Non-video content or video content that isn’t a premium has a lower CPM overall. We want to make sure we reserve a place for that lower-cost, lower CPM inventory to get an extra touchpoint with voters.”

With all the money (and the tension) being placed on the midterms this year, some publishers are pitching their data and insights capabilities to political advertisers.

Major legislative and platform changes like the California Consumer Privacy Act have changed the way political advertisers reach voters, according to Darius Derakshan, associate director of political advertising at the Los Angeles Times. And that could (inadvertently) be a good thing for media businesses: because it’s become more difficult to use third-party data to target voters, publishers can tout their own audience data.

The California primary elections in June drew the most digital ad revenue from an election cycle to the LA Times, Derakshan said. The LA Times declined to share figures. “With a large number of reservations lined up for October and November, the general election looks to be very strong for digital political spending,” he added.

The Washington Post has “invested significantly” in its research and insights capabilities, pitching to political advertisers new ways to reach audiences looking for political coverage “to help them make decisions going into this year’s midterm elections,” said CRO Joy Robins. Engagement with The Washington Post content typically grows by 200% in the weeks leading up to an election day, she added, without giving exact figures.

The Post has invested in surveys and research on its readers to help produce insights for clients and better target readers “based on what we know about their reader journey,” Robins said. For example, if a reader comes to The Post via search, “it suggests that they are part of the cohort of readers who may be actively seeking out information to help them decide,” she said.