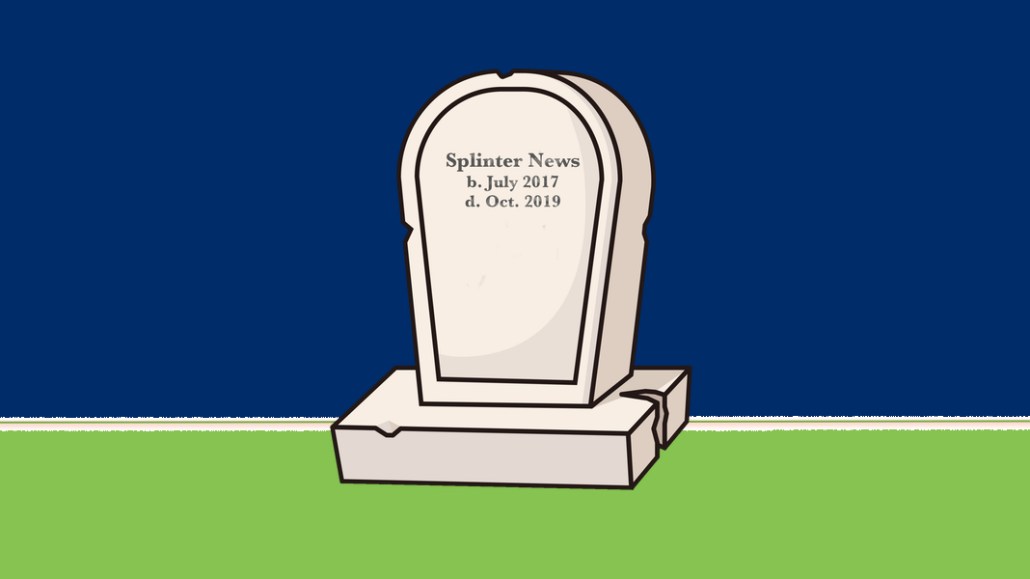 G/O Media is shutting down its millennial news Splinter News, according to a memo sent to staff.

The site will be shut down Thursday, October 10. While the memo said it will not result in any reduction in the number of editorial roles at G/O Media, one staffer tweeted Thursday morning that she will be getting laid off. Freelance contributors were let go as well. A spokesperson said that laid off Splinter staffers will be given opportunities to apply for open positions within G/O Media.

“Despite the hard work of everyone on that staff, which has produced much outstanding journalism and great scoops, establishing a steady and sustainable audience for a relatively young site proved challenging in a fiercely competitive sector,” the memo read. “Given that reality, the leadership made the difficult decision to cease operation of Splinter and redistribute the headcount to the other sites to increase the impact the editorial department can have overall.”

Back when G/O was called Fusion Media Group, it launched Splinter as a rebrand of Fusion, as part of an effort to distinguish it from the cable television channel Fusion. The website Fusion had been launched in 2013 with a slew of high-profile contributors, including commentator Felix Salmon, who described his work there as “post-text.”

At its relaunch, Splinter News was meant to be a hub for coverage of politics and national affairs, with its own video operation and a small bureau in Washington, D.C. Splinter was also home to the Special Projects Desk, a kind of investigative team that later published an infamous takedown of FMG’s then-owner, Univision, entitled “Univision is a Fucking Mess.”

Yet even before it was rebranded as Splinter, the site had trouble drawing an audience. In 2015, The New York Times noted that the site attracted around 5 million monthly unique users. This past month, Splinter drew 5 million visitors, according to Comscore, with more than half of it coming from referrals, mostly from other G/O Media sites, according to Similarweb data.

Splinter’s shut down is the latest in a streak of moves that G/O Media CEO Jim Spanfeller has made since being named to the position in April, shortly after the private equity firm Great Hill Partners acquired G/O Media. Those moves have included a wave of layoffs as well as several new executive hires, many of which have rankled G/O staffers.

Last month, the company told The New York Post it had turned a quarterly operating profit for the first time since 2015. It has put up job listings for 40 roles, which Spanfeller told the Post will return G/O to its pre-layoff headcount; Spanfeller also told the Post that G/O would have achieved this operating profit even had the company retained the 25 staffers laid off earlier this year.

This story has been updated to clarify that while the Splinter shutdown will not result in a reduction in the number of editorial roles at G/O Media, Splinter staffers have been laid off.

https://digiday.com/?p=348947
Most Read
Trending in Publishing in the Platform Era
Digiday Top Stories