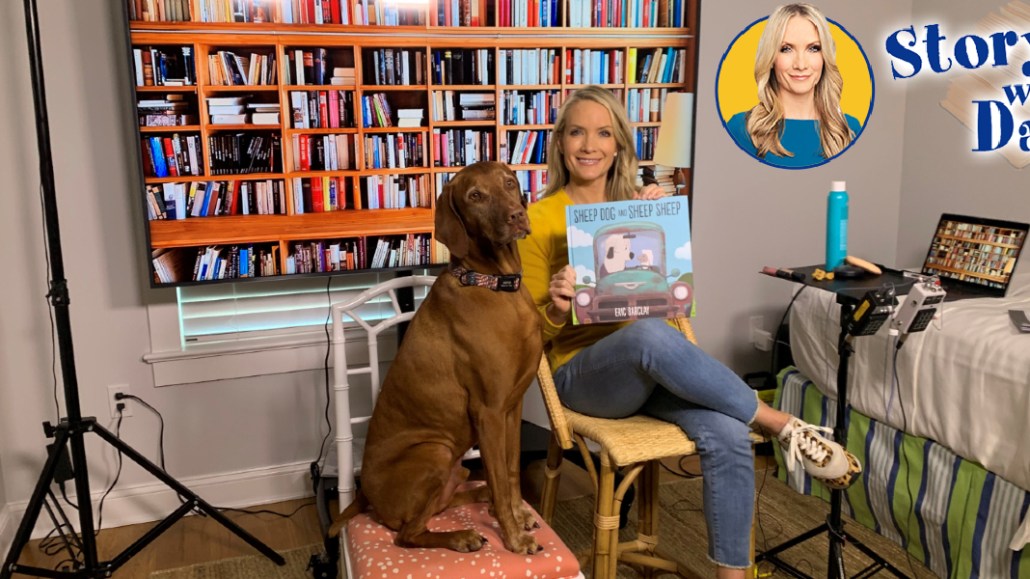 Fox News host Dana Perino got the inspiration for her latest digital show on March 18, during one of her last commutes. Later that day, she had gathered a stack of children’s books and was gearing up to shoot the first Facebook Live episode of a new children’s program, “Storytime with Dana,” from her office.

The show features Perino reading a picture book before to a live audience. In a recent episode, Perino, a former White House press secretary under President George W. Bush, read “A Letter From Tashi – A Snow Leopard Tale,” by Carrie Hasler accompanied by her dog Jasper.

“I don’t have time to read them before,” she said, but reading them cold elicits genuine reactions that she said translates well on camera.

Since then, the show has garnered 8.9 million total views and on average, each episode has had 344,000 views across FoxNews.com, Fox News’ YouTube channel and both Fox News & Perino’s pages on Facebook. On Perino’s personal page, which has over 1 million followers, each “Storytime” video receives more than 1,000 likes or reactions.

Initially, Perino planned for the series to just take place Monday through Friday at 3:30 pm on her personal Facebook account, sandwiched in between the two shows she hosts for Fox News at 2:00 pm and 5:00 pm. And it was aimed at giving working parents a short break in the day since at that point, most schools began to close.

But after running into an executive at Fox News the next day and mentioning the new show, Perino said that the idea was picked up by the exec team and by Monday, March 23, “Storytime with Dana” was syndicated on FoxNews.com, Fox Nation, the company’s YouTube channel and it was linked on the Fox News’ Facebook page.

In addition to “Storytime with Dana,” Fox News also launched a vertical called America Together, which consists of integrated video segments within the channel’s shows and articles on its digital platform. This series’ tagged videos have collectively brought in more than 9 million views.

Perino has been working remotely and shooting her Fox News programs from her home office for seven weeks. The 10-to 15-minute children’s show uses the same camera equipment.

“I thought it would be for a couple of weeks,” Perino said. But now, “I plan to do it as long as I will be working from home.” Beyond that, she said if the audience still engages with it and there is an audience, they will keep doing it.

Perino said there is not any advertising now, nor plans for sponsorship. Instead, “Storytime with Dana” was more about community building and engaging with not only Fox News’ typical audience (whose primary age demographic falls between 25 and 54, according to Nielsen Media Research), but a younger generation of their kids.

Jason Berk, head of social media and entertainment marketing at the agency Sid Lee, said distributing a children’s show makes sense for Fox News because the show is approaching a secondary audience, whose parents are discovering the show and sharing it with their kids.

“Facebook Live was a platform that was in vogue several years back,” said Berk. Right now, though, he said Facebook Live has become popular again is because audiences are “binged out” and “they want to look forward to new programming.”

Publishers “have to start thinking about time slots again because that worked really well back in the days of network television,” he said.