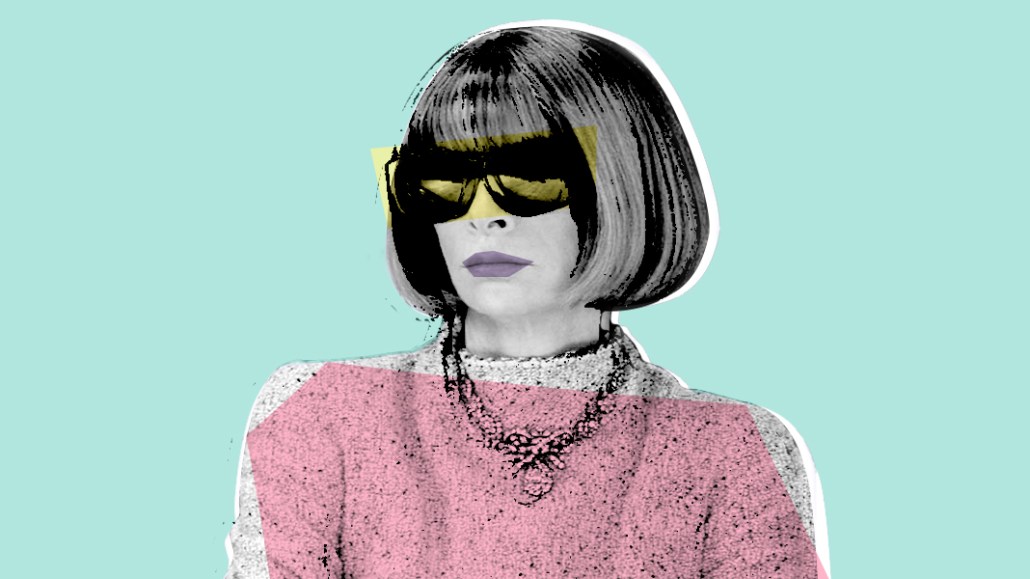 When Condé Nast elevated its famous Vogue editor Anna Wintour to artistic director in 2013, she opened a meeting with the company’s editors by saying, “I’m sure all of you are wondering what the hell I’m going to do.”

Four years (and another title, editorial director) later, she’s started to answer that question. She’s touched nearly all its titles, replacing top editors at some and making key appointments at others. Most dramatically, she’s consolidated the company’s editorial and business creative staff in one team. She’s pushed for the company’s notoriously pampered editors to not just work together but get their hands filthy with revenue-generating schemes. Many inside the company and out view her tenure as largely positive. Measuring her impact is harder to do, though.

It’s an important question now as the company enters a new phase. Its chairman Si Newhouse, who created the company’s allure and glamour and fiercely protected his editors’ independence, has died. Two of its star editors-in-chief, Vanity Fair’s Graydon Carter and Glamour’s Cindi Leive, are set to leave at the end of the year. Editors, Condé Nast’s greatest asset, are generally losing their stature in an industry that’s increasingly run by spreadsheet over gut. With those losses, people will look all the more to Wintour as a guiding hand for the company as it tries to outshine faster-growing, more youth-oriented publications that grew up in digital, like BuzzFeed and Refinery29.

“She is kind of the reigning celebrity editor now, so you just hope that translates into good decisions that are for the benefit of the whole company,” one insider said.

A mixed record
Wintour’s record at the magazines has been mixed. Starting with the troubled magazines in the portfolio, she replaced top editors at Lucky, Condé Nast Traveler, Self, Allure and Architectural Digest. New editors at Condé Nast Traveler and Architectural Digest modernized the titles. There are new launches, millennial-aimed Clever from Arch Digest and Them, a new digital site under Phillip Picardi, digital editorial director of Allure and Teen Vogue, coming on Oct. 26 for the LGBT market.

Wintour’s known for her work ethic, and there’s a new sense of urgency afoot. Picardi, one of two editors the company offered up to talk on the record about Wintour, said he pitched the idea for Them in June, and Wintour called him the next day to tell him it was green-lit. “Before I knew it, I was in business meetings with Fred Santarpia and Pamela Drucker Mann,” he said of the company’s chief digital officer and now-chief revenue and marketing officer.

But Lucky, which was already on life support, shut down in 2015. Self went digital-only in 2016 after changing top editors twice. To John Wagner, group director of published media at Phd, Self, a health and fitness magazine, had become too Vogue-like, featuring models wearing $5,000 outfits and jewelry. “That’s what really turned readers and advertisers off. That’s not who these people are.”

Glamour was once the reliable cash cow and a training ground for star publishers, but it was eclipsed by other titles like Teen Vogue and rival Hearst’s Cosmopolitan that became emblems of wokeness, with their vocal political coverage. Rumors of Leive’s replacement started percolating soon after Wintour’s ascension.

‘A massive cultural shift’
Other big changes were on the corporate side. Wintour was a vocal supporter of the creation of 23 Stories, Condé Nast’s branded-content arm, and the idea to enlist actual Condé Nast editors to help make the ads, an idea unheard of at a company known for its editorial purity. “It is exciting to have new opportunities that will allow the vision and intelligence of our editorial teams to reach consumers,” Wintour was quoted as saying at the time. Wintour installed her former design director Raul Martinez to lead the creative side.

In 2016, she merged all the titles’ editorial creative staffs into 23 Stories. The group now numbers 100 and has bolted on other services to become a full-service agency. The creative move was unprecedented for its centralization of talent but also its combination of editorial and business-side personnel in one group; “it was a massive cultural shift,” Martinez said. Wintour also led the consolidation of magazines’ copy editing and research staffs. Rumor has it that she plans to further consolidate editorial functions, creating cross-company “desks” to reduce editorial duplication.

Ideally, centralizing functions can produce more and better work while cutting costs; the concern is always that titles will lose their autonomy. The company party line is that the creative teams are happier having a variety of projects to work on. “People can handle more sometimes than they think they can. I think they are doing more, but I don’t think that they’re overburdened,” said Amy Astley, editor-in-chief of Arch Digest. Picardi said having all creative teams on the same floor gives creative staffs transparency into what other titles are doing and lets them make sure they stay distinct.

As for the business impact, the company said 23 Stories has helped the company attract new business, and revenue is on track to grow 40 percent this year. Martinez said cost cutting was less the goal than getting better creative work out of the company’s staff. “There is new revenue that is coming in that wasn’t there before,” he said.

It’s hard to discern the impact of the consolidation from the outside. Wagner of Phd said the company has made it much easier for him to get access to editors. Wagner said he recently met with New Yorker sales staff to discuss a branded-content proposal. “They actually went to [editor-in-chief] David Remnick and asked him for permission to execute this. And he did say ‘yes.’ They used to be the house of ‘no.’” He said he’s doing more business with 23 Stories lately, but that’s a result of its being more flexible on price.

David Lang, chief content officer, Mindshare North America and president of Mindshare Content + Entertainment, said he can’t necessarily tell if the quality of the work he’s getting from 23 Stories has improved since the consolidation, but that the organizational approach was good. “To have creatives work across titles is exciting from a creative standpoint because you’re not just working in one vertical, but you’re also able to take best practices and bring them to other brands and clients,” he said.

A print legacy
The overall challenge for Condé Nast is an industry one: The print business is shrinking, and digital isn’t growing fast enough to make up for print declines. The new digital launches are being well received, but they’re a long way from becoming substantial businesses. Success in digital requires collaboration, and the company has taken some steps in that direction.

Wintour may not get mired in the details of digital, but is said to be a staunch supporter of the company’s efforts to modernize. She corrals top editors for monthly, off-the-record meetings with newsmakers who have included Snapchat’s Evan Spiegel and Donald Trump, for example, and is someone no one wants to cross.

“They’re scared of Anna. The whole industry loves her. They’re also terrified of her because she has so much power,” said a former insider.

Still, a question is whether she’s the right person to push collaboration as far as it needs to go. Condé Nast has a strong culture of respecting the independence of its individual titles, some more so than others. Thus, the sites still reside with the magazines, while fellow legacy publisher Hearst separated print and digital, and its digital audience has grown faster. Insiders say there’s resentment among titles over the growth of the corporate digital staff. A few titles — Vanity Fair, The New Yorker — operate more autonomously than the others. Remnick, who’s spoken positively of Wintour’s value in the past, described her as upholding the company’s hands-off tradition.

Asked to comment on Wintour’s impact, Remnick emailed a statement, which he asked to be used in full: “Sometimes there is the cartoon of the person and the real person. The cartoon of Anna Wintour was played with wit and panache by Meryl Streep, but the Anna Wintour I know is not only a woman of style and focus, she’s also incredibly supportive. With The New Yorker, she’s been an incredible ally, which means that, like the Newhouses and [CEO] Bob Sauerberg, she leaves the editing to me and my colleagues — there is never a hint of getting into our editorial business — and tries with everything possible to see that we can do our work in an atmosphere of freedom and financial support. That is tough in any era and exceedingly rare.”

Remnick continued: “I once asked one of Anna’s colleagues why she thought Anna was the editor she is, and this person said, ‘Because she knows what she wants.’ And that kind of clarity with the people you’re working with is not just a matter of barking out a judgment, willy nilly. It’s a matter of taking the time to gather contrary arguments and think things through clearly and then, and only then, ‘know what you want.'”

At a company that still defines itself by its editors, Wintour’s most important job may be to find the right new leaders for Vanity Fair and Glamour. Each has its own risk. Vanity Fair is a highly influential title in politics, business and culture; the challenge will be to keep it on top. For Glamour, the need is to figure out what its unique selling point is in the panoply of women’s media.

Picardi said that based on working with her on two titles, “what Anna’s always asking for is a point of difference. Rightfully, she’s concerned about the homogenization of media in this digital age. She wants to make sure everything is different from what our competitors have been doing.”