Finding advertising ‘antithetical’ to its mission, Snopes is banking on a membership model 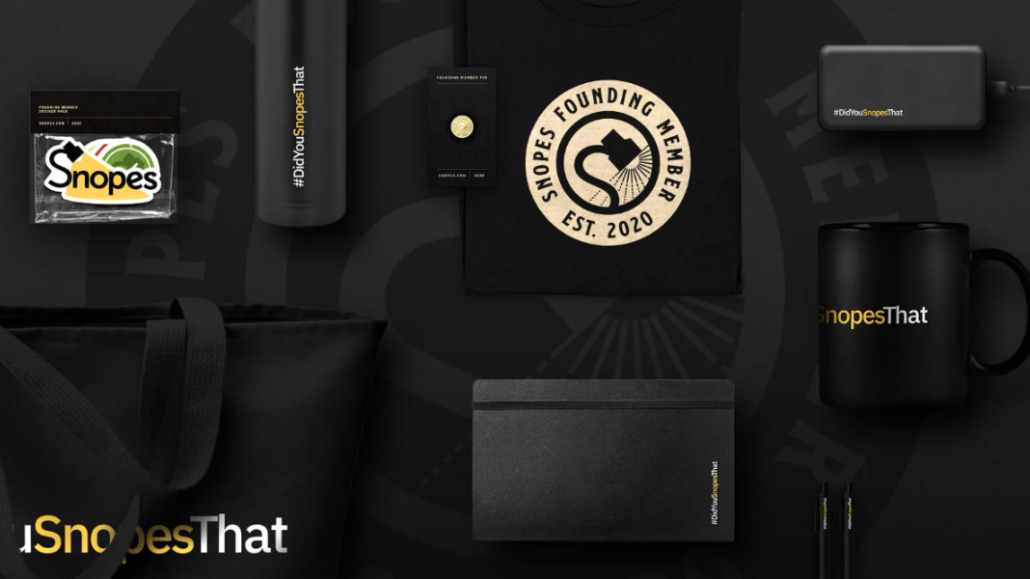 Fact-checking site Snopes is hoping to transition away from its dependence on advertising. So it is asking its supporters to help the brand grow in 2020.

Launching a new membership model in early 2020, the company, which is projected to bring in just over $3 million this year in revenue, is hoping to transition away from its dependence on advertising and be mainly funded by reader revenue. The one-year founding membership starts at $30 and will give members access to a community board where they can contact Snopes’ editors, ad-free browsing, a members-only biweekly newsletter and, starting at $60, branded swag.

“We spent the past two years building something in the media landscape that’s scalable. We just need the capital from our readership to kick off the growth,” said Green, who spearheaded the coding effort. He said that this new tech product will allow the company to gain the capital it needs to stop depending on programmatic advertising, which accounts for approximately 60% of its overall revenue. It will also allow it to grow beyond a fact-checking site and launch new platforms, like a forthcoming news aggregator platform, Snopes News.

“I want ad revenue to be more obscure,” said Green. “Advertising today is antithetical to the Snopes brand and the core user experience and latency [of advertising] undermines the Snopes mission.”

When asked what percentage of revenue he anticipates advertising will contribute a year from now, he said, “We have been in survival mode for so long; it’s hard to think about the future.”

Green said that Snopes has had approximately 50,000 contributions since its launch in 1994. Over 42,000 of those contributions have come from the publisher’s GoFundMe page in the past two years, however, which totaled $1.5 million.

His goal “is that we can do a tenth of 1% of our current audience,” which would be roughly 13,000 out of the over 13 million uniques that the site received in the past 30 days, according to the company’s Google Analytics. The membership and all of its added perks officially rolls out in spring 2020, but readers are able to sign up and contribute money now. Since it went live earlier this week, Green said that Snopes has had several hundred sign ups.

Robbie Kellman Baxter, founder of the membership consultancy Peninsula Strategies, said she thinks that Green’s goal of signing up 13,000 members is reasonable, though she said it’s difficult to make meaningful benchmarks for membership models that publishers haven’t tested before.

Green said the company has looked to launch a membership model for the past two years, starting after it entered into a lawsuit with header bidding advertising company Proper Media. He said the case is stayed for the next few months, but for the past two and a half years all of the money — totaling over $2 million — coming into the organization has gone to legal fees or operational fees, which he said was the driver for the original membership model, its GoFundMe page.

“We would be profitable and able to invest more in Snopes if it wasn’t for the fact that we have to endure two-plus years of hostile litigation,” he said. “Every free dollar we have is either used for growth or our legal defense.”

Snopes also previously had additional income from its partnership with Facebook, which previously paid Snopes from 2017 to 2018 to be one of its fact-checking agencies, in an effort to help the social network combat misinformation on the platform. Green said that in February of this year, which he said was the worst revenue performing month for Snopes, the publisher passed on the deal, which would have brought in an estimated $300,000 to $400,000.

Snopes has a total staff of 15, with 10 on editorial. He said money coming in from the membership product would help to grow the editorial staff. “A fraction of a percentage can dramatically change our business. 1% would more than double our operating budget and we could hire more staff and engineers. It’s not an easy thing to add more people to the newsroom,” he said.

The entire membership model was built in-house, aside from outside design help from a contracted design company. And later next year, Green said there are plans to roll out a Snopes app, as well as the relaunch of ontheissues.org, which members will have automatically have access to.

While members might have similar motivations as a subscriber to get additional content or branded goodies, supporters want to know that their investments are helping to support the organization’s mission.

Supporters will want deeper understandings of how their money is being used to support the company’s mission or journalism, such as calls twice a year for updates on the company, or invitations to a supporters’ meeting.

This story has been updated to clarify that Snopes’ overall revenue this year will mainly come from programmatic advertising, not entirely advertising, as a previous version of the article stated. Additionally, the company’s legal fees have exceeded $2 million, versus $1 million.