Publishers are tightening their purse strings as challenges to their businesses continue to mount, and many editorial departments are being asked to do more with less as a result, according to Digiday research.

In a survey of 200 publishing executives conducted this month by Digiday, 41 percent of respondents said their content budgets would remain the same or decrease this year. Nevertheless, 63 percent of those respondents also said their companies expect to increase the volume of content they produce in 2019 despite no plans for additional funding.

It’s been a rough year so far for many publishers, with high-profile companies laying of hundreds of editorial staffers in some instances. But that doesn’t change the economics of their businesses, and many will have little choice but to continue producing content at a similar rate despite their cutbacks.

Despite the challenges faced by some publishers, the majority say they’re continuing to grow their investment in their editorial output. Fifty-nine percent of respondents surveyed said they are expanding their editorial budgets overall, and only eight percent plan to cut back on funding.

Part of the problem for publishers is that readers’ expectations have changed, as have the demands of social networks and other distribution channels which have offered up bottomless feeds of content for readers to consume. Some publishers have become bloated trying to meet those demands in attempts to stay top of users’ minds.

For editorial staff at publishers expecting more content without additional resources, that often simply means more work and shorter deadlines. One member of Study Hall, an organization of media freelancers, shared in an open statement by the organization, that Elite Daily doubled the word count required for each story while giving staffers less time to write.

Other publishers might simply opt to produce less content. BuzzFeed, Vice, Gannett, HuffPost, and The Players’ Tribune all laid off editorial staff this year. Fewer staffers either means less content overall, or more content per head, unless or publishers have other strategies for introducing new efficiencies to their editorial departments and newsrooms.

Maribel Wadsworth, USA Today Network President and USA Today Publisher, confirmed to Digiday in a statement that following the layoffs at Gannett, “we have reduced the amount of content our local markets produce by 40 percent on average.” However, she said that USA Today still grew its audience by refocusing on national topics that drive higher engagement, and diverting resources to areas such as investigative reporting.

For some of these companies, layoffs meant slimming teams and products to focus more intensely on areas performing well. BuzzFeed’s layoffs impacted 200 people and were done to focus resources on teams producing shows that can be licensed out to platforms, for example. BuzzFeed will also rely more heavily on unpaid contributors to generate quizzes to help offset staff reductions, Digiday previously reported.

However, a spokesperson from Vice said that despite the layoffs, it will not be producing less content. Even after letting go 250 employees and cutting its weekly documentary series for HBO, the spokesperson added that Vice will continue “diversify its content,” through the creation of feature films from Vice Studios, a new Vice Live show and expanding its digital news capabilities. 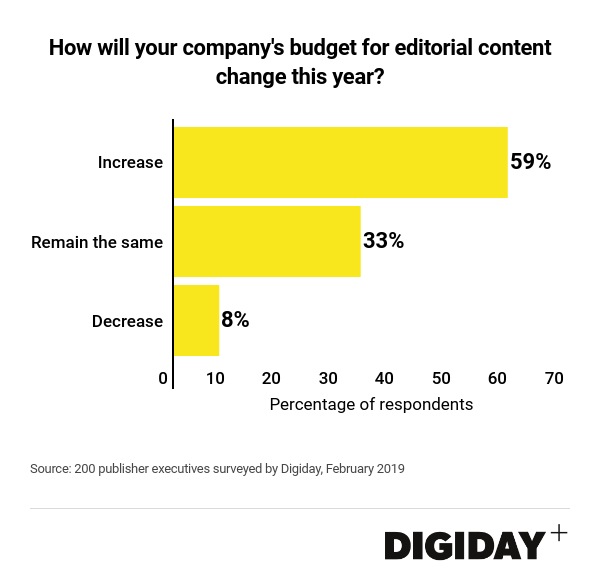 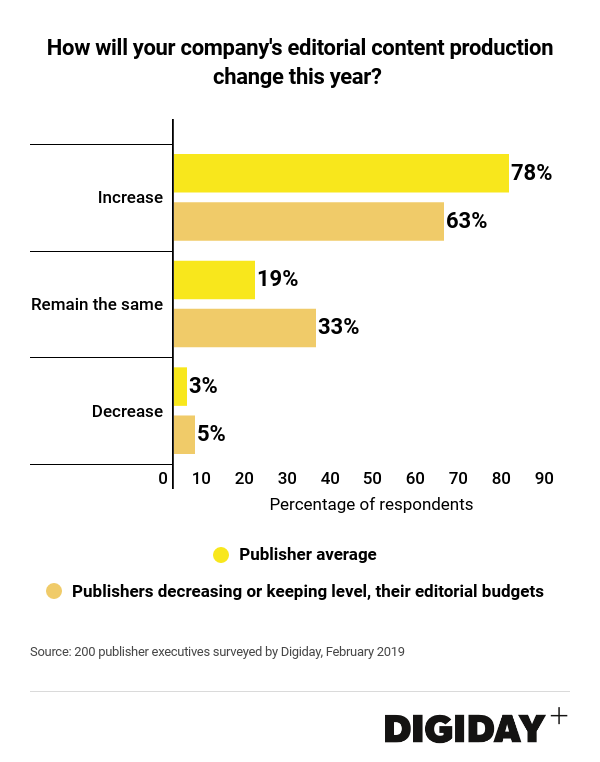 Publishers looking to increase the amount of content they create have several strategies they can pursue. Staffing up is an obvious one. A spokeswoman for The Atlantic confirmed it had already hired 30 of the roughly 50 journalists it planned to add and was producing more editorial content as a result.

Technology can also play a role. Forbes invested in artificial-intelligence tools to help its reporters increase their output by giving article suggestions and even writing rough drafts for contributors to finish. Elsewhere Bloomberg is using bots to help draft article summaries for users.

In general, publishers navigating the changing media landscape must become streamlined and fund sustainable products. Even if that means creating fewer pieces of higher-quality content.