Most publishers expect the majority of their revenue growth in 2019 to come from advertising, despite the challenges they face in the online ad market and their ongoing efforts to cultivate alternative revenue streams.

Of the 91 publishers surveyed at last month’s Digiday Publishing Summit and Digiday Moguls event, 69 percent said advertising is where they expect to see their most significant revenue increases next year. That’s despite many publishers attempting to build new, non-advertising revenue streams such as subscriptions and commerce. 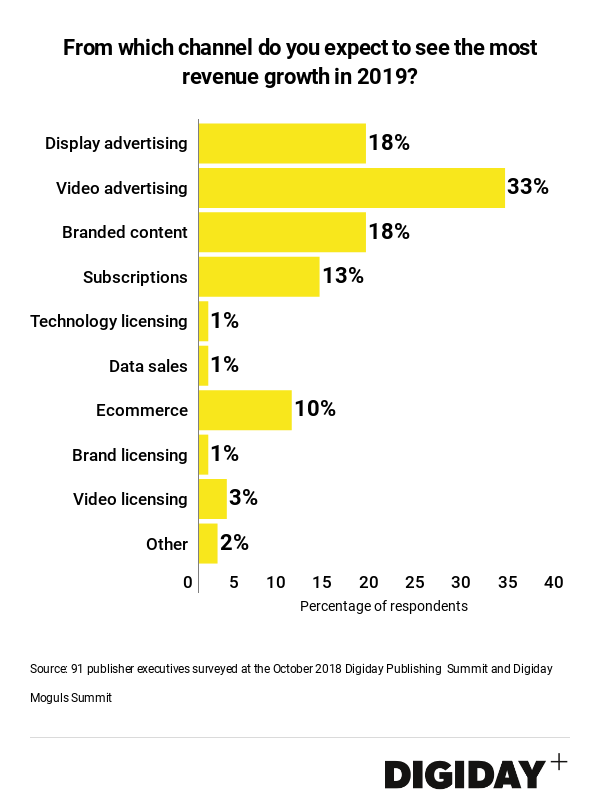 More than any other channel, publishers said they expect to see their biggest revenue growth from video advertising next year, which is perhaps surprising given that some publishers have scaled back their video ambitions and operations in the past year. Companies such as Refinery29 have been downsizing their video operations as video ad revenue lags their expectations. Meanwhile, publishers are at the mercy of changes being made by the major platforms and are coming to terms with those challenges. It emerged recently that Facebook inflated it’s video stats, for example, which may have encouraged publishers to push more heavily into video despite audience limitations.

Behind video, survey respondents also said they expect to see strong revenue gain from display ads and branded content. Those channels play important roles for publishers’ revenues but come with their own challenges. Programmatic display ad revenues are often eroded by exorbitant and hidden tech fees, for example. And publishers are struggling to compete with the efficacy of the data-driven ad products offered by Google, Facebook, Amazon and others. Meanwhile, publishers pushing branded content face shrinking margins and high content production and distribution costs.

Publishers are adopting various tactics in an attempt to eke out more revenue from their display ad operations, including introducing header bidding and switching to vendors operating first-price auctions.

Publishers with growing ad businesses are still seeing revenue growth elsewhere. Bustle, despite increasing its audience size and advancing its programmatic ad business this year, isn’t counting solely on advertising for new revenues. According to its Chief Revenue Officer Jason Wagenheim, experiential events — driven by its recent acquisition of Flavorpill — will be its fastest-growing revenue stream in 2019.

For mature publishers with established ad business, it can be difficult for advertising to generate significant growth compared with newer streams, such as subscriptions or e-commerce, which can scale faster, albeit from a much smaller base.

Even though more publishers are getting into the e-commerce game according to Cho, getting people to make purchases online remains tricky.