Publishers have widely adopted the Interactive Advertising Bureau’s ads.txt initiative but media buyers haven’t shown the same enthusiasm. Just 23 percent of media buyers surveyed at the Digiday Media Buying Summit this month say they only purchase ads.txt-approved inventory, despite over 86 percent of U.S. publishers now having incorporated it, according to Adzerk.ok

Last year, the IAB released ads.txt as a way for publishers to identify which vendors were approved to sell their online ad inventory. Ideally, this would allow buyers to avoid unauthorized sellers and fraudulent practices like domain spoofing. Now, most demand-side platforms enable buyers to exclusively buy ads.txt inventory. But although buyers say there’s now a critical mass of available ads.txt programmatic inventory to bid on, they haven’t committed to it.

“I don’t have a good reason for why people are not buying from approved sellers when possible,” Oscar Garza, evp of media activation at Essence, told Digiday. “Eight months ago, you might have if DSPs didn’t have it together technically or if there wasn’t enough scale, but now that’s not the case.”

Garza said that Essence only buys ads.txt-approved inventory from participating publishers, but still buys other inventory in programmatic exchanges when needed to complete certain campaigns. He also added that Essence plans to only bid on ads.txt inventory by the end of the year. By doing so, Essence would join 360i in allowing clients only to purchase ads.txt-verified inventory.

However, one executive from a media buying agency told Digiday that it doesn’t filter inventory exclusively by whether it’s ads.txt approved or not. Roughly 60 percent of their inventory is bought via private marketplaces, the executive noted, which are inherently less susceptible to brand safety, domain spoofing or transparency issues. 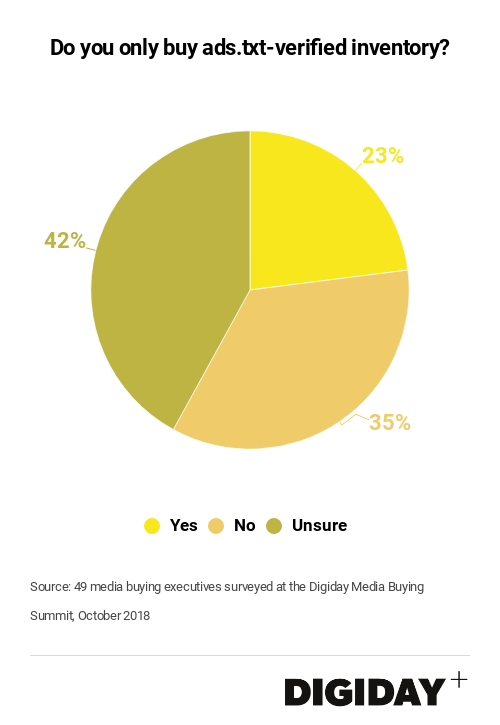 Others, targeting niche audiences, argue that they can’t complete certain campaigns relying solely on ads.txt inventory. John Malysiak, U.S. head of digital activation for OMD, said, “We need to go where our audience is, and things like ads.txt can limit our ability to do that. Finding our audience first always is the pole position, provided that we can stay in all the requirements of the clients and ensure things like brand safety and viewability.”

When it comes to pricing, opinions are split whether ads.txt increases the price of inventory. Like 360i, Garza said that purchasing ads.txt inventory didn’t mean paying higher prices. Another agency executive said the prices might be higher, but that the inventory was of higher quality. “Ads.txt is one of a number of things that identify inventory as more valuable, and if there’s less of it, then it’ll obviously increase prices.”

Meanwhile, there’s little pressure to adopt an ads.txt-only strategy from advertisers. Nearly 1 in 5 advertisers haven’t even heard of it according to a survey earlier this year. Unscrupulous media buyers might also have little incentive to educate clients. Garza added, “For some buyers, if they’re hitting their numbers, they can say things like, ‘I don’t care about attribution, fraud or viewability’ as long as they get that bonus check.”

Rather than the lack of media buyers or advertisers exclusively pursuing ads.txt-verified inventory, Garza said the real issue is how 42 percent of respondents were unsure if they exclusively bought ads.txt-approved inventory. “How could you not know? I think education in our industry is seriously lacking.”

Although ads.txt isn’t perfect and can be weighed down by simple problems such as spelling errors in the text files, tests by publishers like the Guardian US highlight its importance. In an effort to buy its own inventory, only 28 percent of its video ad spending actually made it to itself with the rest being taken by illegitimate third-parties. Limiting video buying in open exchanges to only buying from PMP’s is one way agencies could reduce the risk they’re exposed to fraudulent ads.

Ultimately, it’s the responsibility of the client to take ownership of their media spend and ask the questions of their agencies to ensure that their dollars are being spent appropriately.