HBO Now is leading the pack when it comes to TV networks operating over-the-top video services, according to a survey of entertainment, studio, and publishing executives at the Digiday Hot Topic: Future of Entertainment last week in Los Angeles. Of the 44 executives polled by Digiday, two-thirds selected HBO Now.

A survey of similar audience members said the same in a survey at the Digiday Hot Topic: Future of TV event in February this year.

HBO doesn’t spend as much as some of its OTT competitors on content, and has previously been critical of the $8 billion Netflix spends on content. HBO spent around $2.5 billion on content in 2017. Additional resources from AT&T could help close the gap and the company pursues more quality programming like its hits Game of Thrones, Silicon Valley or Westworld.

Warner Media has already announced it intends to launch it’s own streaming service to compete with Netflix and Hulu. Including HBO content as part of that service could help new attract new subscribers. 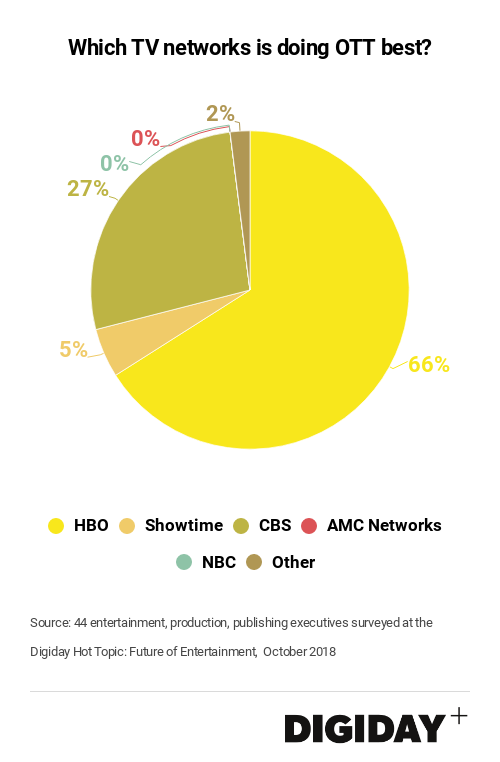 Additionally, TV networks are increasingly launching their own OTT channels to re-engage cord cutting consumers. Though CBS-All Access has half the number of subscribers – 2.5 million – than HBO Now, consumers can access expanded news coverage from CBSN’s OTT app. Meanwhile ESPN, owned by Disney, released ESPN+ and quickly amassed 1 million subscribers, which may eat away at HBO Sports’ audience.