For most online publishers ad revenue isn’t getting any easier to come by, as platforms swallow up a growing portion of advertiser budgets and layers of middlemen continue to chip away at media dollars before they reach publishers’ sites. As a result, the need to wring the greatest yield possible from their programmatic operations is only becoming more pronounced.

One way publishers are doing so is by actively shrinking the numbers of ad-tech vendors they work with.

In a Digiday survey of 132 publishing executives with knowledge of their companies’ tech stacks conducted this February, 40 percent said they reduced the number of advertising-related vendors they work with in the past 12 months. Meanwhile, 44 percent of respondents also said they intend to cull the overall number of ad tech partners this year.

“There is definitely more momentum now to cut vendors rather than adding more,” said Paul Bannister, evp of strategy at Cafe Media, adding, “In most cases we found that more partners bring very little truly incremental value and solely exist for their own benefit and not actually to serve the publisher themselves.”

Part of the incentive pushing publishers to cut vendors is a maturation of their approach and a shift to cheaper in-house options. For the past two years, Ranker has undergone a mission to diminish its reliance on external vendors and build more of its advertising offerings in-house, for example, according to its chief technology officer Premesh Purayil. “By taking greater ownership of our advertising infrastructure we’ve been able to develop several more cost-effective solutions similar to the technologies vendors are offering,” he said.

While publishers might not be able to build tech such as brand-safety and fraud detection tools themselves, functions such as ad-serving and header-bidding might offer easier opportunities to cut out vendors.

Purayil thinks his experience of building in-house tech and then dropping vendors is far from unique. Rather than a single event like the enactment of the General Data Protection Regulation in Europe or growing adoption of ads.txt, he believes publishers are slowly and independently taking ownership of more of their advertising tech, which naturally leads them to cut vendors eventually. “Over the past year or so, I’ve seen more publishers now allocate at least one developer to advertising products. Once you get into the ad-tech side and are big enough, you worry about making sure your advertising products are independent enough.”

Earlier Digiday research found that 55 percent of publishers will increase their spending on ad technology in 2109. 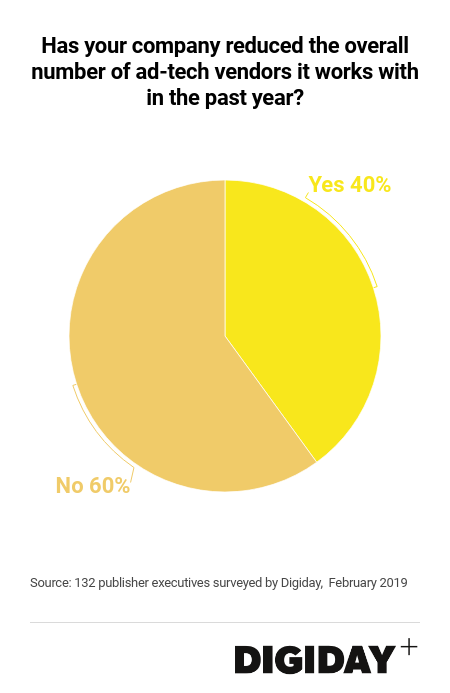 As publishers’ understanding of programmatic advertising matures, their ability to evaluate and hone on those third-parties adding real value is improving also. Publishers are getting a better idea of what’s working for them and are whiting their partners down, and have moved beyond simply throwing technology against the wall to see what sticks.

For others, consolidation is a driving force behind their need to streamline. “After we were acquired, there’s naturally overlapping technology between the companies. Since last year, we’re in the process of trying to merge or let go of the redundant vendors we use, but it takes time,” said one anonymous executive. Given the continued consolidation in digital media, vendors could increasingly find themselves out in the cold as the market shrinks. 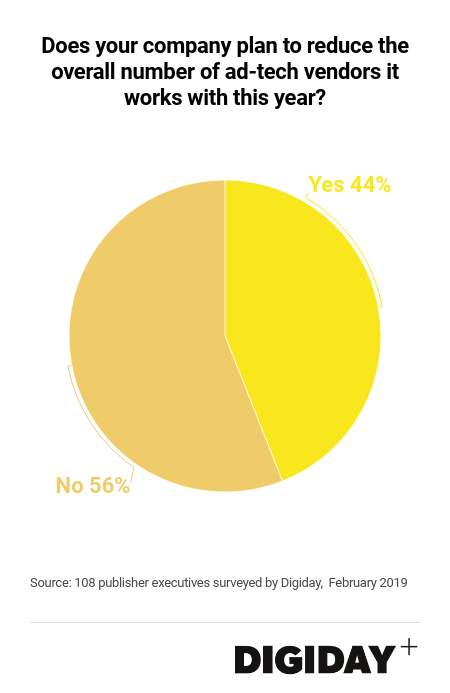 Elsewhere, advances in tech mean working with fewer partners is increasingly feasible. After adding on a lot of demand partners when header bidding was first created, “we’ve cut back the number of SSPs we’ve worked with – at one point it was above 40 to now just over 30 this year,” said Marc Ropelato, director of programmatic revenue at Future Plc.

He noted that most of the SSPs Future Plc no longer works with were smaller vendors that hardly bid or won any ad impressions. Now, if Future is considering new SSPs, Ropelato said, “we want to make sure they have unique demand sources, otherwise we can fill that ourselves.” Research from Pathmatics found that SSP use among publishers declined by 26 percent from 2016 to 2018.

As publishers continue to take ownership of their advertising products or become consolidated into other companies, the trimming of their programmatic offerings of excess vendors is likely to continue. For vendors, well they can do themselves a favor by actually providing meaningful value to advertisers.