Digiday Research: Publishers will boost spending on ad tech in 2019

Over half of publishers said they are planning to increase their investments in programmatic ad technologies next year, according to Digiday research.

As more digital ad dollars are transacted programmatically, publishers are doing everything in their power to make their programmatic offerings as attractive as possible to buyers, and to ensure they’re wringing as much value as possible from their inventory.

Fifty-four percent of 187 publishers polled by Digiday this November — all of which sell ads programmatically —  said they intend to spend more on programmatic technologies in 2019. Forty-two percent said their spending will remain consistent and just three percent expect it to decline.

Programmatic might now be advertisers’ preferred method of ad buying, but it comes with tradeoffs for publishers. Continued downward pressure on ad pricing is making it harder for some publishers to make ends meet. By investing in and improving programmatic functions like header bidding, private marketplaces and programmatic guaranteed tools, publishers are attempting to squeeze greater yield from their inventory with better technologies.

And buyers also have growing lists of demands when working with publishers, increasingly calling for them to incorporate third-party ad verification and brand-safety services, analytics tools to provide more granular campaign metrics, among other things. All of these services, in addition to the time and money they require, can quickly add up. 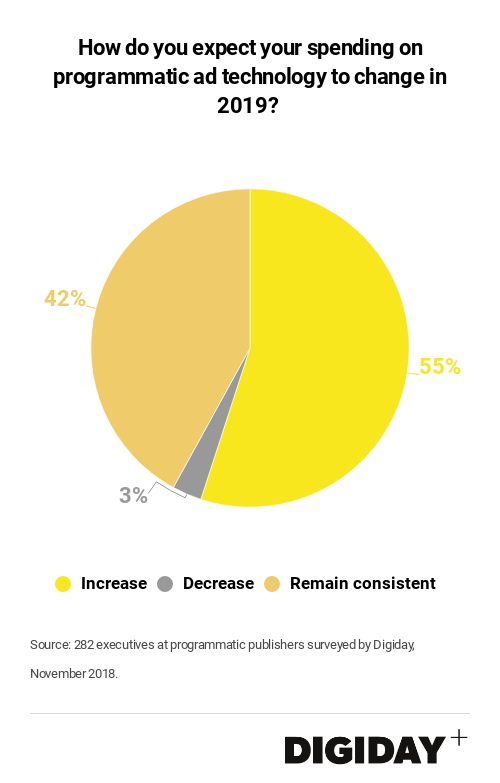 Some publishers say those increased investments are paying off. Evan Adlman, senior vice president of enterprise sales at Conde Nast told Digiday the company has been investing in its private marketplace technology and encouraging buyers to transact through those channels because the publisher earns higher yields there.

Meanwhile, publishers like BuzzFeed are still ramping up their programmatic operations, having avoided selling ads that way until August of 2017. Dan Walsh, senior vice president of global business operations, products and sales strategy said BuzzFeed will continue to invest in its programmatic tech in 2019. Last year BuzzFeed opened up inventory from its selection or properties for sale through nine supply-side platforms.

New regulations are also forcing publishers to fork out more. After the General Data Protection Regulation came into effect earlier this year, publishers had the option of licensing a consent management platform (CMP) to help facilitate the implementation of consent strings in programmatic buying. Since CMPs can play an important role for publishers in preserving programmatic revenues, many publishers were quick to spend the money.

Aldman added that in addition to adopting a CMP from a vendor, Conde Nast allocated resources to, “build tools that triple check what these platforms are telling us to make sure that we always have the most up to date data to comply with GDPR.” Those resources can quickly add up.

For publishers with a well-established programmatic business, there can be a limit to how much it makes sense to invest in programmatic technologies. Working with two many programmatic vendors can actually harm programmatic revenues in some instances. As publishers work on improving their programmatic offerings for their clients, it’s a battle to ensure their investments translate into meaningful upside, and not just ever-mounting overheads.