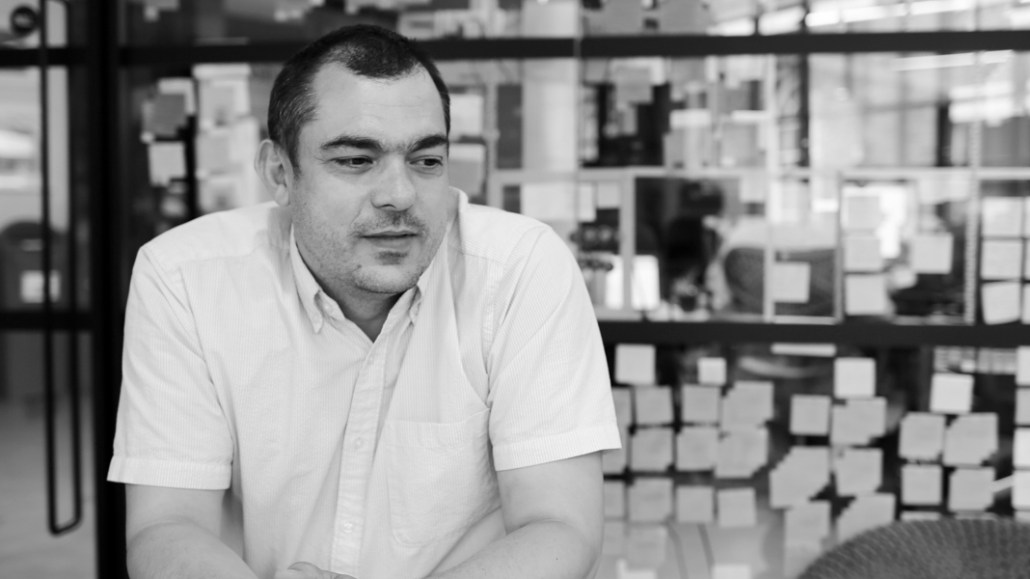 On Ilicco Elia’s first day as Deloitte Digital’s new head of mobile in May at Deloitte’s New Street Square office in London, a sea of corporate suits greeted him. “I just saw 100 people in blue suits and thought, ‘Goodness me,'” he said. “I was wearing my usual chinos and T-shirt. But after a while, I spotted three other people dressed more like me, and we mouthed at each other, ‘Are you with Deloitte Digital?’ and we all were.”

Elia, a six-year veteran of DigitasLBi, wasn’t hired to fit in. He was brought in to lead Deloitte’s key mobile team as it seeks to encroach on the turf of ad agencies. Agencies have long defended the encroachment of management consultancies like Deloitte on their turf by reasserting that such corporate beasts can’t buy culture. But for Elia, Deloitte’s $1.5 billion digital agency can combine the best of both worlds: buttoned-up corporate and casual creative.

Elia is no stranger to corporate vibes. After earning his degree in civil engineering from the University of Manchester in 1990, he headed straight to news giant Thomson Reuters, where he stayed for 22 years, most recently serving as global head of mobile of Reuters Media. During that period, he became one of the most highly esteemed people working in mobile in the U.K. for his work on developing cutting-edge products for Reuters that redefined how its journalists gathered and distributed news. His work also involved pioneering a new relationship between journalists and bloggers, along with advocating for social media’s role in incorporating the general public into the news-gathering process. In 2010, his team at Reuters streamed interviews via Nokia N95 mobile handsets with the leaders of the coalition government, former Prime Minister David Cameron and former Liberal Democrats leader Nick Clegg, as well as former Prime Minister Gordon Brown.

“I remember David Cameron saying how amazing it was that all the interesting questions were coming from Twitter, not from the journalists in the room,” he said. That same year, he was recognized as one of MediaGuardian’s 100 most influential people.

Former colleagues describe him as a charismatic, acutely smart personality who was continuously pushing the boundaries in mobile development, attributes that made him stand out from the crowd. That meant he wasn’t the stereotypical “mobile nerd” many clients would expect when the agency was pitching in mobile’s most formative years.

“Ili could talk at a CMO level about marketing and advertising, then flip a coin and go super deep into mobile,” said Gareth Jones, a former colleague at DigitasLBi who is now managing director of Possible. “He wasn’t what they expected. He was also just great to hang out with.”

That attitude fed into the kind of mobile product prototypes Elia would create. “Ili was never afraid to just go and do stuff, create something and come back and show his colleagues — he didn’t wait for permission,” Jones said. “Whenever there was something happening like a merger or an acquisition or some kind of corporate event, he was the first one to grill senior management and ask the difficult questions. He wasn’t Mr. Corporate.”

Elia built DigitasLBi U.K.’s mobile presence from the ground up. He established the agency’s first mobile incubator, dedicated to developing new kinds of mobile technology, which he insulated from the rest of the agency. “The team was not beholden to the same rules as the rest of the agency, which was measured by billable hours,” Jones said. “They sat outside it and prototyped stuff to show clients, which is a hard thing to do in a company run on numbers. That’s testament to Ili’s desire to progress things. He was always a step ahead.”

That’s not to say it’s been an easy journey. Convincing senior marketers with traditional mindsets that they would become obsolete if they didn’t invest more in mobile at times seemed like a lost cause. “Many would look at me as if I was mad,” Elia said. But colleagues recall his passion and energy for proving the value and necessity of mobile and his ability to speak authoritatively and charismatically about mobile’s role within wider marketing and advertising strategies set him apart in meetings.

Elia certainly won’t be short of gadgets at his new home. Deloitte Digital’s London office lobby is packed with gadgets like 3-D printers, virtual reality equipment and a life-size connected store that demonstrates to visiting clients what a digitally enhanced shopping experience will look like. Oh, and a robot named Maggie lives in the reception area.

For Elia, the challenge will be to figure out which of Deloitte’s sea of clients will benefit most from his team’s attention. “It takes a lot of strategic thinking to investigate which clients mobile can most beneficial to,” Elia said. “But mobile is a more exciting place to be now than it ever has before.”