When Yashica Olden was interviewed to be Condé Nast’s new chief diversity and inclusion officer last fall, HR connected her with several staffers from various racial and ethnic backgrounds to learn about their experiences at the company.

It’s an opportunity Olden, who joined the international media company in October, wants to provide all future candidates interviewing for jobs — giving them a chance to speak about Condé’s workplace culture before they join.

It’s one example of the policies and operational changes media organizations are testing in the face of new pressures to make their businesses less overwhelmingly white and male.

Last summer, sparked by the Black Lives Matter protests following the murder of George Floyd, Breonna Taylor, Ahmaud Arbery, and others, the media industry was one of many to vocalize commitments to improving the representation of Black, Indigenous, and people of color (BIPOC) within their staffs and in their coverage. In practice, those promises were delayed.

Now, media organizations are turning to new HR programs and practices to meet these goals. Still yet, many publishers have not established hard figures of what percentage of new hires should represent people from marginalized communities.

Of the four media companies Digiday spoke to for this story representing a range of sizes and coverage areas, half could not say how many non-white and non-male employees they had hired so far this year, after pledging to diversify their organizations. And while many companies have DE&I goals for its applicant pool — those guidelines don’t often apply to its actual hires.

Editor’s Note: If you are a media employee and are frustrated with the pace of change related to DE&I initiatives, please reach out to our team.

New goals for recruitment and hiring

The pathway for media companies to do a better job of making their newsrooms less white hasn’t always been smooth. And, in some cases, not even after a spotlight was shown on these practices. Take Condé Nast, for example.

Days later, Condé’s food publication Bon Appétit came under fire for the culture of racism, microaggressions and exclusion that took place during former editor-in-chief Adam Rapoport’s reign. Rapoport resigned but the anger remained and many on-camera personalities from the popular BA Test Kitchen YouTube channel left as a result.

Controversies like these had financial implications as well and it led advertisers and media buyers at the time to evaluate whether those companies were brand safe environments under the confines of these DE&I lenses.

In turn, Condé made new efforts to change the makeup of its organization — including creating Olden’s role — and conducted an internal survey asking employees for their race, gender and sexual orientation.

The gender data from the pie charts below reflect Condé Nast’s global workforce (about 6,000 employees), while the race and ethnicity data is only reflective of its U.S. workforce (approximately 2,700 employees) since this is the only location where the company can legally collect this data. Of the 96% U.S. employees who responded, 30% self-identified as non-white. Globally, 68% identify as women.

New hires in 2020 were still mostly white in the U.S., but more women than men were hired globally, according to the survey.

Condé could not immediately say how many of the more than 230 people it hired to its staff since March of this year are non-white. Those stats will be available in an updated report to be made public at the end of the year, according to Olden.

“I wish that we could like snap our fingers and increase our representation in seven months. It’s not that easy. Culture change in an organization takes years sometimes,” said Olden, who has worked in D&I for more than 20 years at companies including advertising agency Ogilvy and communications firm WPP.

Condé wants 50% of all job applicants annually to be non-white, however there are not set goals for each individual hiring manager, said Olden. The idea, though, is that the more diverse the candidate pool is, the more likely it will yield a significant percentage of non-white hires. These goals do not apply to the actual hires that are made.

These goals are not just limited to full-time hires. Condé’s Vogue aims to have 15% or more of all its freelancers and contributors to represent Black voices. Other brands in the portfolio are in the process of adopting a similar strategy.

But the company has still faced internal criticism — Condé’s The New Yorker’s archive editor Erin Overbey, who has worked in that department since 1994, shared in a Twitter thread earlier this month that less than 0.01% of print feature and critics pieces have been edited by a Black editor in the past 15 years, which is as long as the tenure of editor-in-chief David Remnick.

BDG has also committed to 15% of all freelancers across the portfolio to be Black, according to a company spokesperson. To match its editorial coverage with that commitment, 15% of all products or brands that are mentioned in stories are Black-owned or are from Black-owned businesses.

This “15%” figure is not arbitrary, according to someone familiar with the company. It was inspired by designer Aurora James’s “15 Percent Pledge,” which calls on major retailers to stock 15% of their shelves with products from Black-owned businesses, reflecting the fact that Black people represent about 15% of the U.S. population. The editors at BDG are expected to conduct content audits throughout the year, however the frequency of those checks were not shared.

Industry Dive has pledged to make sure that at least one candidate in every open position’s three finalists is a person of color or from a “diverse background,” said Wendy McWhorter, Industry Dive’s vp of talent acquisition and engagement.

McWhorter, who reports to Industry Dive’s CEO Sean Griffey, said that diversity and inclusion has always been a tentpole for the company, and was discussed regularly as part of her job description since she was first onboarded six years ago.

Since March 2020, Industry Dive added 164 new employees to its team via new hires and acquisitions and is currently hiring for 24 roles, according to a spokesperson. The company, which just reached a total of 300 employees, would not disclose what percentage of those new hires or acquired workforces were non-white.

Getting in front of the right candidates

Companies also have to be mindful that their job postings reach the right people.

“We make it a point to remind ourselves that we don’t know what we don’t know. That could mean going way outside-the-box to tap into a broader array of potential job candidates — like delving into niche [Facebook] Groups rather than relying on just LinkedIn,” said Nich Carlson, global editor-in-chief of Insider, which currently has more than 100 active open roles.

When asked who all have been hired through this channel, a spokesperson for the company said this information could not be shared as these groups are “private and invite-only.” 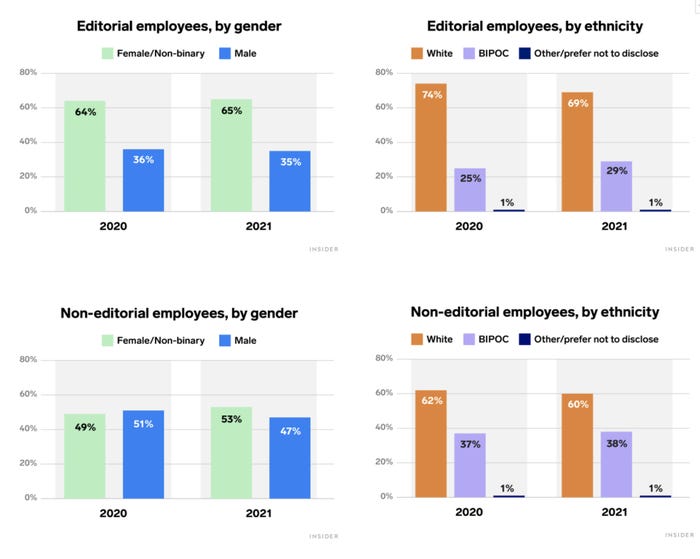 Image description –
From Insider's 2021 demographics and pay report, comparing its total staff's gender and race break down in 2021 vs. 2020.

Between July 2020 and July 2021, Insider’s overall staff grew by about 28%, according to a spokesperson. The newsroom also grew by the same percentage during that time frame, with 50 of new editorial hires, or 40%, self-identifying as BIPOC. More than half of new leadership hires made during that period were women or BIPOC as well. As of April 1, 2021, 29% of Insider’s editorial employees were BIPOC, which is a 16% increase year over year, according to the company’s demographics and pay report.

This report did find that there was a significant pay gap issue between employees of different genders and races at Insider. On the editorial team, women earn $0.90 for every dollar their male colleagues earn and $0.80 per dollar on the non-edit team. For BIPOC employees, the pay gap is $0.90 per dollar and $0.88 per dollar, for editorial and non-editorial roles, respectively. The author of the report, vp of talent Margaret Bowani, attributed to the leadership at Insider being more skewed toward white individuals and men — something the company is working to address, Bowani wrote in the report, but did not list any concrete actions.

To achieve this growth, Insider created two roles: a head of DE&I on the people and culture team and a managing editor devoted to DE&I on the editorial team. Additionally, the company launched two fellowship programs: a DEI fellowship in partnership with Dillard University and a fellow program with the National Lesbian and Gay Journalists Association (NLGJA), according to the company.

Partnerships with organizations and universities like these have been crucial for each publisher.

BDG, which is currently hiring for about 30 positions in the company, is working with organizations like the Black in Fashion Council, Scope of Work, Free Arts, BDG x Syracuse Diversity Internship, MIM Connect, Remote POC, and The Clubhouse Network to recruit full- and part-time positions as well as interns and fellows.

Since 2020, 47% of BDG’s new hires have been non-white, according to chief people officer Trisha Dearborn. A spokesperson for the company said BDG could not disclose the actual number but said 47% represented “hundreds” of new hires.

I am not interested in just sponsoring something and giving money.
Yashica Olden, Condé Nast’s chief diversity and inclusion officer

Industry Dive has worked with historically Black colleges and universities (HBCUs) for years to recruit potential candidates and originally started out those partnerships by attending campus career fairs, said McWhorter. So far, the trade media publisher has hired one employee from its relationship with Howard University.

Condé Nast took a similar approach in working with diversity-focused professional organizations like Sistas in Sales, Colorcomm, The National Association of Black Journalists and The National Association of Hispanic Journalists. Rather than simply posting open roles on job boards, Condé employees will speak at these organizations’ conferences or do resume-building workshops in order to give members skills and professional development guidance that could benefit them in the job application process.

“I am not interested in just sponsoring something and giving money because I do think that it’s important for us to have to have a presence [and] begin to build these relationships in a way that’s positive, not just for us, but for them as well,” said Olden.

We want to make ourselves more competitive as an organization in the marketplace.
Yashica Olden, Condé Nast’s chief diversity and inclusion officer

Over the past year, Condé employees pushed for — and achieved — a change to its benefits package, including gender reassignment insurance, domestic partner benefits, and a more generous adoption policy.

Meanwhile, both BDG and Industry Dive have created buddy systems for new hires where they are assigned a colleague that can help them feel welcome and answer workplace-related questions that they might not feel comfortable asking their bosses or teammates.

Ultimately, it is an employees’ job market right now and it’s on the publishers to win over the staffers with a wider array of benefits and an inclusive workplace culture that will not only attract applicants but keep workers there for the long run.

“We’ve got to be focused on meeting their needs and being an attractive place to work for people. We want to make ourselves more competitive as an organization in the marketplace,” said Olden.