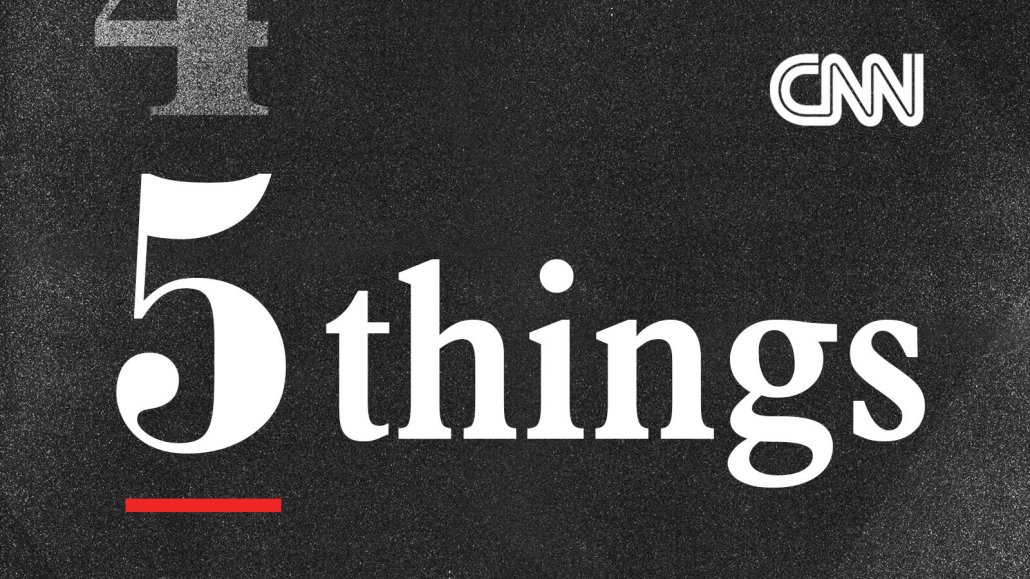 CNN Digital is stretching its 5 Things email newsletter from a daily article roundup into its own franchise. The WarnerMedia-owned news network has already expanded 5 Things into a podcast and TV segment. Now CNN Digital is considering adding international and evening versions of the newsletter as well as more daily editions of its podcast.

5 Things is CNN’s largest newsletter, capturing more than a third of CNN’s total newsletter subscriptions, according to Alan Segal, vp of audience development and analytics at CNN Digital. The newsletter puts together the five biggest stories of the day, and presents them in a simple format: a topic headline, a video and a paragraph describing the news story, with links to CNN articles for more information.

CNN, which has about two dozen newsletters, declined to share its total newsletter subscribers. Launched in 2015 as a weekday newsletter, 5 Things began also publishing on Sundays in July 2018 and now has a team of about eight writers and editors working on the newsletter.

As a result of the newsletter’s popularity, CNN rebranded its twice-daily Daily News Briefing audio news briefing in March 2021 to pull it under the 5 Things umbrella. The 5 Things podcast now accounts for 43% of CNN’s total podcast downloads, according to Courtney Coupe, svp of CNN Digital Productions. CNN declined to provide its total podcast downloads or say how much revenue 5 Things generates for the company.

Both the newsletter and podcast make money via ad sales. CNN produces custom ads for audio advertisers that are not host-read. While CNN does not offer a programmatic audio product, they are currently running a limited programmatic test.

“We saw 5 Things as a brand that already had such a strong value proposition [and] voice, so we want to grow and build upon that,” said Coupe. The rebrand gave the podcast a name that was recognizable to CNN’s audience, Coupe said. In under five minutes, the audio show goes over the five top stories of the day in a format that is “short, right to the point and easily digestible,” Coupe said.

Now, the 5 Things podcast — which already has morning and evening editions — wants to dip into the weekends and air more episodes throughout the day “over the coming months,” said Coupe. CNN is hiring a dedicated team of 10 people for the 5 Things podcast.

CNN’s morning program “New Day” began running a 5 Things segment last week. It will be a regular part of the show’s programming. Other potential products and extensions the CNN Digital team is experimenting with include an evening version of the 5 Things newsletter that could cover other regions of the world in different time zones, such as news from CNN’s newsroom in Hong Kong, Segal said. The podcast could also have early morning editions for other time zones that are ahead of the U.S., Coupe said.

The challenges — often the case for multi-format digital products — are how to bring the newsletter audience to audio and how to get audio listeners to subscribe to the newsletter, Coupe said. Biweekly focus groups with listeners help. The focus groups showed that listeners “wanted credible, trusted information” that can “easily fit into their lives,” not “something long, that they had to carve out time for,” Coupe said.

CNN’s core business model “is in danger” due to cord-cutters who are moving to streaming TV services, said Dan Kennedy, a journalism professor at Northeastern University. “It makes sense for the network to experiment with different kinds of news products that aren’t dependent on cable,” he said.

https://digiday.com/?p=415534
Most Read
Trending in Publishing in the Platform Era
Digiday Top Stories