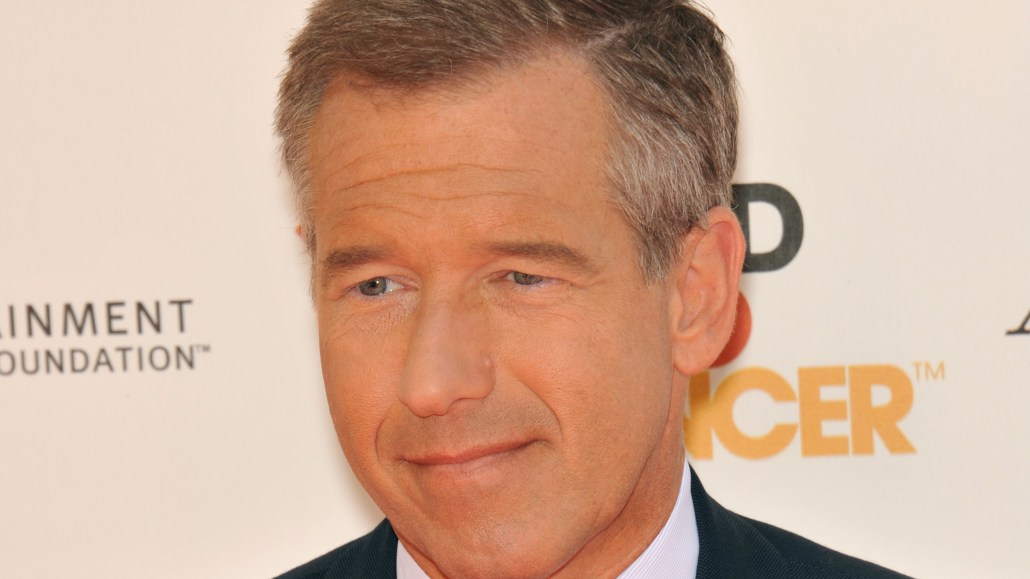 Brian Williams has been suspended from NBC for six months, the network announced Tuesday night. Williams’ actions — that he had misrepresented his role in a story while embedded with troops in Iraq — were “inappropriate” and “completely wrong,” the network’s president, Deborah Turness, said in an internal memo obtained by the New York Times.

The scandal — and attendant ratings drop — could not have come at a worse time for the network. The star anchor’s revelations that he may have a truthiness problem hit during the Nielsen’s sweeps period, when the data collected often turns into the basis for many ad-sales decisions. Worse, it also happens to be an especially bad time for ratings to be down, given that upfront season begins next month.

But while an advertiser exodus doesn’t seem imminent, NBC may have an increasingly hard time attracting brands looking for new places to spend their money.

One media agency executive told Digiday that he still doesn’t think existing advertisers will pull out, but if he were in the market to spend in news, he may now look at ABC and CBS first so as to not deal with any negative associations. He added that even the six-month suspension is unlikely to create reverberations in the ad community.

Another media agency exec said that the suspension is not likely to make ratings drop, although it does make competitor news organizations look more credible. Barry Lowenthal, president at the Media Kitchen, echoed that, adding the caveat that “it’s a stretch” to think that an advertiser’s credibility is so tied to an anchor’s perception.

Of course, NBC has much bigger problems than one anchor with a shaky relationship with the truth. And those problems are shared by the other networks: On Tuesday, hours before the six-month suspension was announced, WPP Group’s Kantar published a report that indicated that even if ratings fall, revenue from ad sales won’t, and that the current state of affairs is a “reflection of the ossified state of evening newscast ad revenue.”

Jon Swallen, Kantar media’s chief research officer for North America, said in the report that revenue for weeknight newscasts is down 4 percent over the last decade even as ad revenue overall has risen 11 percent. Which means that the impact on NBC’s bottom line, even if there is one, will be limited.

Still, the recent ratings picture is not a pretty one for NBC. According to the earliest estimates from Nielsen, NBC was behind ABC in the 25-34 age demographic on Monday night — the first night the telecast was on since Williams announced that he was taking himself off the air for “several days.” NBC Nightly News ratings dropped 36 percent Friday — the day he apologized on-air — before Williams officially took his hiatus.

In comparison, ABC was down 16 percent, while CBS was down 17 percent. (Fridays tend to be slow for evening news broadcasts.) Friday was the first night ABC’s “World News” beat NBC, averaging 8.5 million viewers.

The question remains about how bad ratings have to get for advertisers to start reconsidering NBC. Many of the advertisers during Nightly News, as with most evening news programs, are pharmaceutical and drug companies like Cialis, Centrum and Restalin. What those advertisers are looking for at this time is an assurance that NBC conducted a thorough investigation that kept the Peacock brand untarnished, said one buyer.

“If advertisers walk away, it’s going to be a reflection of ratings performance,” said Catherine Halaby, associate director of strategy at Brand Union. “If you’re an advertiser on an evening network broadcast, you want Williams to survive. Maybe you get a discount.”

NBC did not respond to a request for comment.

Another media buyer who spoke on condition of anonymity because of client concerns said that it is not a given that advertisers will move away. Lester Holt, who is taking over for Williams, still has appeal. But if Williams comes back, things may change, with a “small fallout” possible.

While NBC Nightly News still reigns among the evening news programs, the gap is decreasing. At the end of January, Nielsen reported that “World News Tonight” on ABC is improving the most when it came to total viewers and adults 25-34 and 18-49. It’s also struggling among the all-important younger set — only 1.5 million viewers are under the age of 50.

Williams himself is an important part of the Nightly News brand. He embodies the somber newsman but isn’t afraid to make an appearance on SNL for a laugh — qualities which make him a sound personality to base their brands on, according to Halaby.

That personal brand, though, has definitely suffered. The New York Times reported that the Marketing Arm’s celebrity index, which ranked Williams No. 23 on trustworthiness before the scandal began, now ranks Williams No. 835.