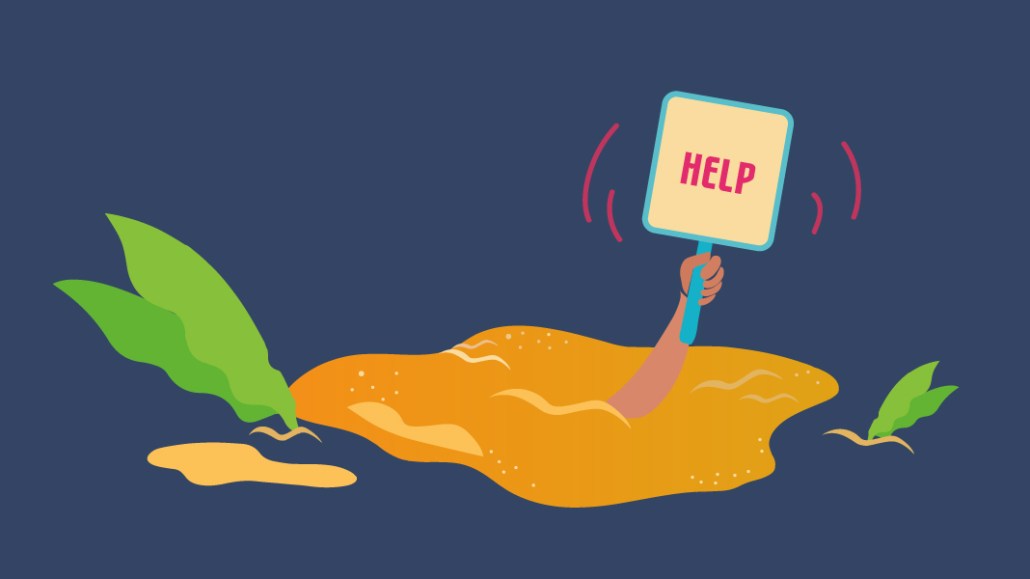 The rush of advertisers trying to do more marketing themselves is as much a threat to agencies and ad platforms as it is an opportunity.

Some advertisers are going back to media agencies and ad tech vendors after struggling to run those services themselves. The reasons vary but tend to hinge on the difficulty in recruiting qualified personnel, which can be turned off from working for a single company and not having exposure to various marketing facets that will help their careers.

When online marketplace Notonthehighstreet.com decided to buy its own search and social ads earlier this year, it realized very quickly it wouldn’t be able to do so without help from technology platform Goa Marketing.

“Resource is a key challenge for in-house teams, and we are building an internal team that will combine over 10 years of experience, said Notonthehighstreet.com’s head of performance marketing, Luke Boudour. “Unlike an agency that can re-deploy resource at short notice, in-house teams do not have that luxury. Having an external partner does help mitigate against this as it does a lot of the heavy lifting in day-to-day data analysis, which gives us the time to spend making actual changes to influence performance.” He adds that, while time will need to be spent developing internal tools and training staff, it’s just a part of the transition.

Flight-booking app Hopper faced similar challenges when it tried to build its own Facebook buying tool to avoid paying any service fees as well as tweak some of the tools to its own specific needs, said the app’s head of user acquisition, Simon Lejeune.

Building the tool was easy, he said, maintaining it wasn’t, to the point where the cost of doing so wasn’t worth the return. The longer the process went on the more Lejeune and his team realized that buying Facebook ads internally wasn’t saving them as much as they first thought. In the end, Hopper decided to focus on creating its own buying tools on platforms that didn’t have their own, so it built software to buy ads on Snapchat, Twitter and Pinterest. Even then it needed help from advertising automation platform Smartly.io to make it happen.

“It’s about pricing correctly the value that a service brings to your company and compare it to the fee that is asked,” said Lejeune. “What is changing in the marketing space is that the value that companies find in external services is moving from human expertise to automation software.”

Advertisers still worry over how agencies profit from their investments. Brands like Mazda, Heineken and Adidas have sought third-party help to get that clarity, as a result. But agencies, in turn, say they can now be trusted to show marketers what happens to their money — so long as they aren’t incentivized to just keep prices down.

It’s opened up new opportunities for agencies like Mediacom, The&Partnership, Engine Group and Jellyfish, which are increasingly working as either an adviser or recruiter for senior marketers looking to take more creative production and media planning in-house. It’s getting harder for agencies to make money out of biddable trading due to the transparency issues. Consequently, agencies are chasing margins in different ways.

“Brands still want a high-end strategic offer when they work with agencies, but they want to be able to pull that expertise as and when they need it rather than paying $50,000 a year for a retainer with a traditional agency,” said Johnny Hornby, founder of WPP-backed The & Partnership, which manages in-house teams for Toyota and News U.K. “That’s a problem for the larger holding companies rather than the smaller agencies because they have to put all the costs of running different agencies into the bills of clients.”

The agency has built internal teams for Toyota and News U.K. that flex in headcount and expertise depending on what’s needed, whether it’s campaign management, strategic thinking or data insights. Other agencies charge clients a management fee rather than a commission to manage relationships that the advertiser has brokered directly with Google and Facebook. Agencies want to get paid for consultancy rather than execution now.

“What we’re seeing in the market are far fewer media pitches than there were at this time in 2017 and a lot more noise around in-housing,” said Gawain Owen, strategy director at Jellyfish. “We’re seeing more brands have an internal expert who understands how digital is traded and executed but isn’t too deep into the weeds. They are the conduit between the brand managers and digital practitioners — but they don’t all need to be in-house especially when running seasonal campaigns.”

As brands look to take more control of their marketing, they are becoming less interested in the traditional expertise of media agencies, but they still need service. They are looking to automate more of their marketing, often from a single platform, but need businesses that can give them data, analytics and measurement to help ensure they don’t plateau in performance.

From a cost perspective, it’s often better to be able to “tap in and out of specialized and evolving skills” rather than constantly invest in them as an internal fixed headcount, said Lucinda Peniston-Baines, managing partner at marketing management consultants The Observatory International. She said, “The advertisers that have tried to build a more permanent in-house model, a year on and they’re still struggling to house the right capabilities. And for the few that have made progress, I suspect some are leaning on a tech stack they don’t own or software they don’t manage.”