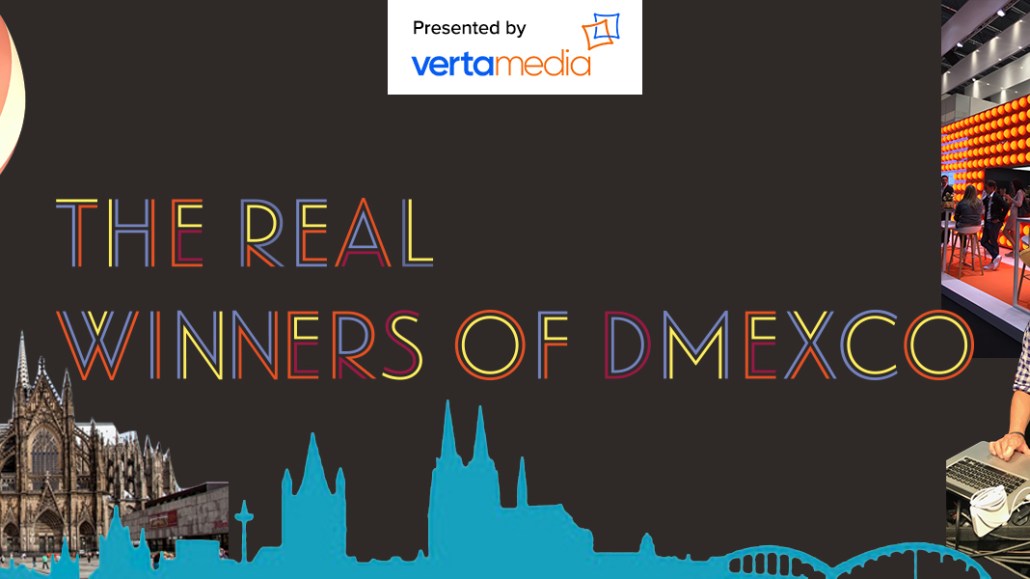 As the sun sets on the digital advertising industry’s favorite trade show Dmexco this year, it’s important to absorb the excited clamor and ad tech earnestness with a heavy pinch of salt.

Digiday has just the ticket for attendees reeling from the two-day bonanza. Below is a list of who we think are the real Dmexco award winners:

Most bizarre ad tech company name: This is one of the most competitive categories, but first prize goes to German ad tech firm Baqend. A quick look at its website informs you it is a “High-Performance Backend-as-a-Service” company, confirming its rightful place as winner of this accolade.

Weirdest ad tech buzzword: “Blockchain ad stack.” The ad tech world loves to borrow from the finance sector (programmatic auctions based on stock exchange), and blockchain is the latest inherited concept. No one truly understands whether it can do what ad execs claim: clean up transparency issues. But that didn’t stop the term “blockchain ad stack” being spouted left, right and center.

Stupidest new acronym: “CDP,” which stands for Customer Data Platform, made its debut at Dmexco, much to delegates’ confusion. “Surely a DMP covers this?” asked a bewildered ad exec.

Juiciest rumor: The ad tech merger and acquisition rumor mill goes into overdrive at Dmexco each year. This time, the chatter centered around Rubicon Project and AppNexus. Tongues were wagging over whether Rubicon Project would get acquired or if it would merge with an independent demand-side platform. AppNexus also got a lot of air time about whether it would really IPO or be bought by AT&T, as everyone is speculating.

Most ironic statement: “We’re not for sale.” In an industry like ad tech, where everyone unapologetically chases an exit strategy, this comment from an ad tech CEO caused more than a few chuckles.

Biggest ad tech bore: There is a time and a place for pitching ad technology, even at Dmexco. The London-Brussels-Cologne train is not it. Digiday received multiple complaints about a pinstripe-suited and booted character relentlessly pitching niche ad tech services to anyone who unwittingly made eye contact, while they tried to digest their beers and bratwurst.

Dodgiest pitch: “We are an intermediary data vendor that fires real-time intelligence into the bid stream to maximize performance.” What?

Cheekiest vendor: Traditional social etiquette dictates that whoever holds a party and invites others to it usually picks up the check. But one large group of delegates was lured to a bar party by a header-bidding provider, only to find the group was expected to pick up the extensive tab at the end.

Booth overkill: Top marks go to native ad company plista, whose booth was transformed into a jungle, complete with giant treehouse bench swings and palm trees. It definitely stood out from the crowd.

Most inaccessible booth: Snapchat’s booth was far smaller than the likes of Facebook, Google and Amazon, but strangely, it was the most fiercely guarded. Security men flanked the booth, barking at attendees to not take photos. That’s a bit ironic for a “camera company.”

Best booth party: Germans love house music, so the fact that Dmexco’s halls pulsated with house tunes (faintly in the morning, loudly in the evening) came as no surprise. But German media group ProSiebenSat.1 went to town for its booth party, where its DJ — decked out in traditional lederhosen, per the instructions given to attendees — blared hard house music. At least a third of the guests took the wardrobe instructions seriously and also sported lederhosen. The ceiling and walls of the booth were made entirely of mirrors, causing more than a few collisions but giving the booth a real club feel. This party raged well after most of the other booth parties.

Best swag: Fidget spinners were a big hit this year. Make of that what you will.

Best after-party: OMClub has become the biggest unofficial Dmexco party (only Dmexco virgins go to the official party), this time complete with bungee jumping and circus acts. Excited publishers headed for the party in droves.

Best confession: “I am beyond fucking hungover this morning. I am actually surprised I am not technically dead,” said an ad tech vendor on the second morning of the event.