The weekend is almost upon us. But before you leave for the weekend, check out a few of the best stories we published this week.

Going for the gold
The Olympics are a time when the world comes together to watch 10,000 athletes embark on a 2-week-long quest to bring home some gold and glory for their home countries. It’s also a time when both the media and marketing industries do everything they possibly can to insert themselves to the conversation.

Indeed, brands like Dick’s Sporting Goods and United Airlines are now rolling out documentary films starring various Olympic athletes. The BBC is planning to go live, online and in 360-degrees to cover the games. The Financial Times, meanwhile, picked Rio de Janeiro as the subject of its first virtual reality project.

And yet, with all of these options, when it comes to the actual competitions, viewers still prefer watching the Olympics on TV.

Kevin Roberts  goes away
Last week, Publicis’ ex-head coach Kevin Roberts came under fire after refusing to acknowledge that gender diversity was a real, systematic problem in the advertising industry. The furious backlash culminated in Roberts’ resignation, but as Digiday managing editor Shareen Pathak noted, real sexism is harder to spot than ever.

“It’s more subtle,” said one agency director. “And also there’s a new wave I think where men are feeling threatened by modern feminism and are starting to feel insecure.”

There has been progress, but it’s created a new set of problems. “People think simply ‘putting women on the board’ is job done, despite the fact that these women are normally in HR or administrative roles,” said one female media exec.

In other words: there is still a lot of room for growth before this issue is truly “over.”

Google and Facebook are giants, but publishers can still compete
That’s according to IAB chief executive Randall Rothenberg, who joined Digiday editor-in-chief Brian Morrissey on our podcast to cover everything from platforms to ad blocking.

On those platforms: Google and Facebook are sucking up three-quarters of new digital ad spending. As a result, publishers are left to fight over the scraps — which is “ludicrous” to Rothenberg.

“Any given internet-based operation has equivalent amounts of data on its own audience on its own site,” he said. “It’s the same as an independent magazine publisher in 1985 could still compete with Time Inc., Hearst and Conde Nast.”

The New York Times has an eight-person Snapchat team
Publishers are still compelled to devote significant resources to creating content for different social platforms, regardless of how effective those platforms are in actually driving revenue back to the company. Take, for instance, The New York Times, which is not on Snapchat Discover and yet has eight people on its Snapchat team, according to Digiday’s new platforms reporter Max Willens.

“Right now, we’re using it as a means to connect with new audiences, a younger audience, and flex different storytelling muscles,” said Cynthia Collins, social media editor at The New York Times, which didn’t disclose how many people actually watch its Snapchat content. There are people at the company “who are exploring” how to generate revenue on Snapchat, she noted.

Google will continue to ramp up AMP
AMP, Google’s answer to Facebook Instant Articles, is a huge priority for the search giant. How huge? This week, Google said it’s expanding AMP to all mobile search results, not just the news section and the carousel near the top of the results page. Soon, it will also introduce a new “live ticker” section, which will push out the freshest content from AMP publishers at the very top of the page. 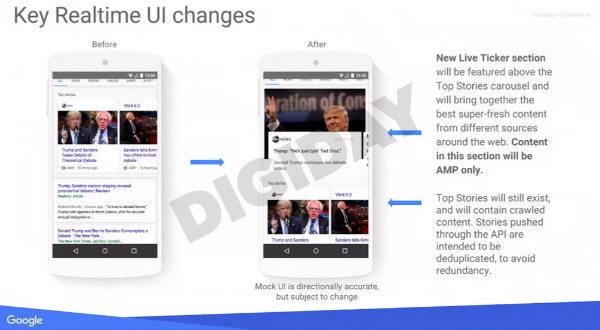 “It’s great,” said Chris Schieffer, senior product manager at The Slate Group, which started using AMP in April and has seen 25 percent in additional traffic because of the product. “In terms of size, we’re a second-tier publisher behind The [New York] Times, the [Wall Street] Journal and the [Washington] Post. We are fighting with those guys for a spot in the carousel. Opening up AMP where it’s not strictly in that carousel is going to be huge.”