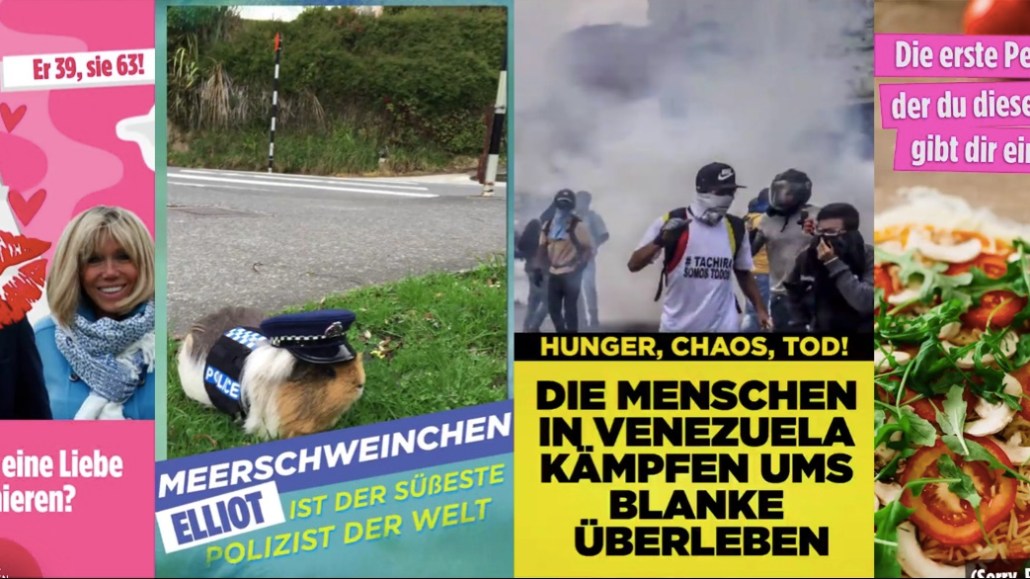 Axel Springer tabloid Bild wants to cultivate a new, loyal audience on Snapchat Discover. With Germany’s presidential election looming, figuring out how to make political news stand out on Discover will be top priority.

Bild has a 20-person social team dedicated to creating content that suits specific social platforms and the different audience expectations on each. Resources from that team will be pooled for Discover. Three weeks of tests have shown a strong appetite exists for both typical teen fare, like snaps on how to fall in love and be a good kisser, and political content like snaps about newly elected French president Emmanuel Macron.

Bild will spend the next few months honing how it reinvents political content for Discover ahead of the country’s presidential election in September.

“The election will be the biggest news in Germany. We have a lot of young people who will be voting for the first time,” said Jakob Wais, head of new platforms content strategy at Bild. “We want first-time voters to be as well-informed as possible. And that will be interesting, as we’ll have to come up with ways to make politics interesting to young people. And that’s tough.”

Two snaps announcing Macron’s election as president and giving details about his wife, like the fact she is 25 years his senior and his former drama teacher, drove high views. “So far, political content has been pretty successful,” said Christian Mutter, Bild’s social media editor. “But it’s important how we treat it. We can’t just transfer what we publish on the website. The snaps on Macron stirred a lot of curiosity.”

Although political content will be a focus, pop culture topics won’t be sidelined. One of the most popular snaps created so far was related to Germany’s biggest influencer, Bibi, whose YouTube channel has 4.5 million subscribers and generates around 60 million monthly views. This month, she released her first single “How It Is (Wap Bap…)” on her Bibis Beauty Palace YouTube channel. Bild used Snapchat’s voting feature to ask users whether they liked the single or not. That was one of the most-viewed editions so far, though Wais said it was too early to release official numbers.

“Our mission is to reach young people who may not have been in contact with Bild before — 13-year-olds who are just starting to look for news. We want to show them what our brand is about and that news is important. We aren’t on any of our platforms for a quick win; you have to spend time and build a loyal audience,” Wais said.

Bild will monitor when and where people swipe up, whether they’re more interested in videos or text articles and how long they stay within each edition.

It’s early for Snapchat Discover in Germany, and there are no official usage figures yet for the market. Snap claims 55 million users across Europe, 10 million of whom are in the U.K. That lack of clarity on numbers has frustrated some publishers and media agencies. But it hasn’t deterred Bild. The plan is to test, learn and extend the Bild brand to young audiences, which don’t come to its homepage.

It’s clear Bild is in it for the long game. The team isn’t interested in mirroring clickbait style tactics many publishers have used to build quick reach on Facebook but wants to focus on what will sustain loyal engagement. “We want to be a reliable source for younger readers, especially in this time of fake news,” Wais said.