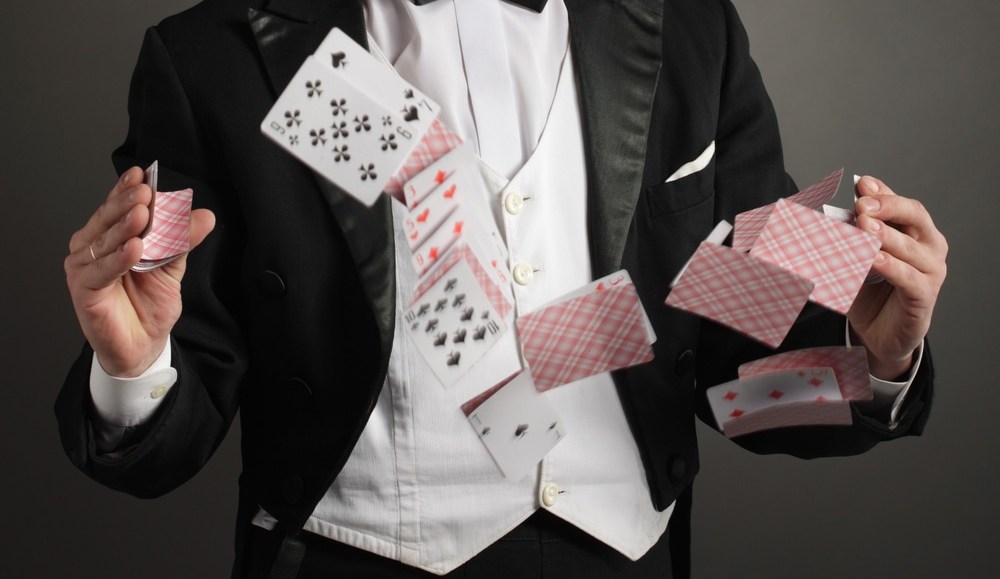 Los Angeles-based agency 72andSunny has its own resident “Magic Mike.” No, not the Channing Tatum Chippendale type, the actual pulling-rabbits-out-of-a-top-hat type.

“Magic” Mike Jacobson is a strategist at 72andSunny, but he is also a performing magician on the side. According to Jacobson, he spent most of his intern interview almost five years ago performing card tricks. Jacobson took time to talk to Digiday about his love of magic and the similarities between being a magician and an agency strategist.

How did you first get into magic?
When I was 9, I went to a summer camp that had a magician perform. He was amazing! Actually, I’m pretty sure he sucked, but I thought he was amazing. At the end of his show, he showed us all how to do one trick: how to take a piece of string and pull it through your neck. So, of course, I literally took that piece of string everywhere I went and showed it to every adult I knew. They all acted really impressed. Looking back, they totally weren’t, but I thought it was awesome. As a kid who’s told what to do by adults every day, it was really awesome having something over them that I didn’t have to explain or justify. I got a high from the amazement and joy I could bring people, and probably the power over adults at that point, too.

How often do you perform magic gigs? And what kinds of gigs do you do?
I perform private shows almost every weekend and public shows at the Magic Castle about once or twice a year. Since it’s a side gig, I try to just do the shows I want to do (aka only for adults). It’s not that I don’t like kids, they’re just not as awesome. … I’d have to perform magic I don’t think is interesting. So generally I perform at a lot of private birthday parties, weddings and corporate events all over the US and sometimes abroad. Corporate is probably my favorite. I’ve been fortunate (and/or lucky) enough to perform for everyone from Facebook to the Real Housewives of France to the US government.

Tell me about “The Ellen DeGeneres Show.” So you auditioned and made it on? When was this?
This was in January 2010. The producers of the show knew that Ellen loved magic and wanted to feature a young magician in LA. So they reached out to a handful of us to submit videos. Mine was literally just me going around 72 doing magic for people. I honestly didn’t think it would go anywhere. But then the next week, I got a call from them asking me to come in and perform for them in person (to make sure I wasn’t a creeper and didn’t just edit the video). I performed for them, they happened to dig it, and I got on the show! It was absolutely incredible.

What is the worst part of being in the agency world?
Hands down, the inconsistency of our schedules. As a planner, I like to plan.

What is the best?
The people. I love knowing that I’m going to come to work and laugh every day. It’s so much fun and inspiring being around awesome people all day. Oh, and the ability to drink at any moment.

Are there any similarities between being a magician and being a strategist?
Magic and strategy are actually really similar. It’s all about figuring what people are thinking, why, and then using it to your advantage to make them think something else. I also feel like awesome magic is like awesome work: We have to make it relevant or people won’t pay attention. They have to feel like you get them and you’re on the same level or it’ll kind of suck. There’s a higher standard for entertainment these days just like there is for advertising, so magic has had to step its game up, too. That old magician with a top hat telling stories about their grandparents is super outdated. So my approach is to just be a normal dude and try to create acts around things happening in culture (e.g., “Magic Mike” the movie) and magic with things that people can relate to (e.g., your cell phone). I may have dropped “YOLO” and “THASHICRAY” in an act last weekend, because they’re just hilarious to me.