WPP’s Martin Sorrell: ‘We need to watch out for Tencent and Alibaba’ 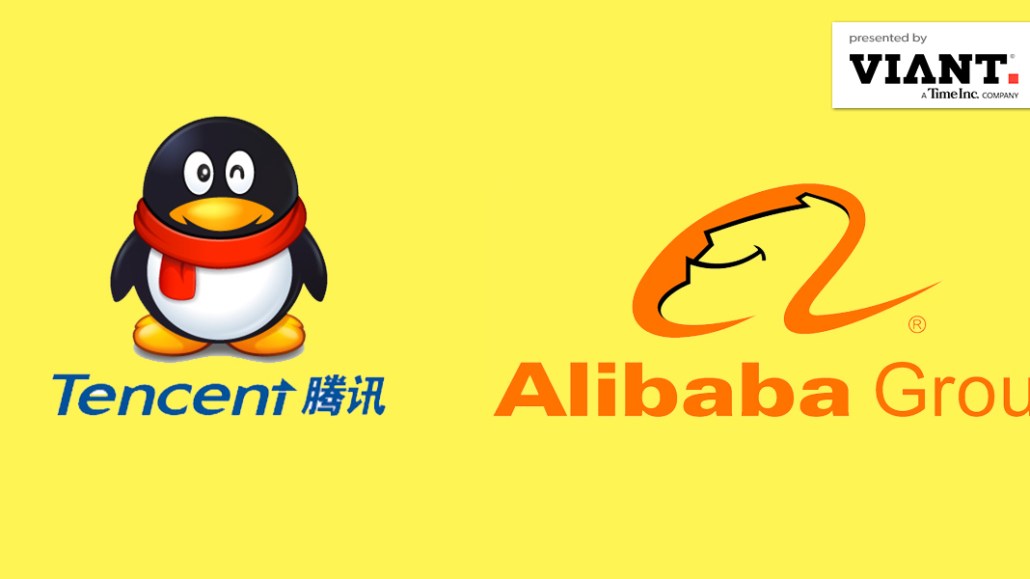 U.S. marketers might know little about Chinese tech giants Tencent and Alibaba. But for WPP chief Martin Sorrell, China’s duopoly is becoming as competitive in advertising and marketing as its Western peers Google, Facebook and Amazon.

“Google, Facebook and Amazon, along with two Chinese companies — Tencent and Alibaba — are the ones we need to watch out for,” said Sorrell in an Advertising Week discussion with New Yorker writer Ken Auletta on Sept. 25.

Sorrell said his team visited 31 local companies in 10 days while in China three weeks ago and was struck by the size of top tech companies in the market. For instance, telecommunications company Huawei’s headquarters in Shenzhen accommodates 50,000 of its 200,000 employees, while the Alibaba campus in Hangzhou houses around 50,000 employees, according to Sorrell.

“The West — [I, myself, fall] into the category — doesn’t want China to succeed because we want to go out and compete with them. But they are going to win and be competitive,” he said. “In Singapore, Alibaba is competing with Amazon head-to-head, for instance.”

Tencent and Alibaba are well aware of Western advertisers’ interest in them. Speaking at a separate Advertising Week presentation on Sept. 25, Steven Chang, a vp for Tencent, touted his company’s ability to build “a whole advertising ecosystem,” providing tech, data, content, media and the like. Tencent and Alibaba also made big advertising pitches at Cannes Lions and the International Consumer Electronics Show this year.

Chang ticked off examples of Tencent’s might. He said 268 million people in China use QQ — the first instant messaging service Tencent developed — in any given minute. On average, Chinese mobile users spend more than 58 percent of their online time on Tencent apps, including WeChat, which has 938 million monthly active users. With around 166 billion yuan (around $25 billion) in game revenue a year, Tencent has become the biggest online game developer in the world. Meanwhile, Tencent pulls in around 255 billion yuan (around $38 billion) a year in online advertising revenue, said Chang.

“With QQ ID and WeChat ID, we can help advertisers track what people are doing within Tencent-[owned and -operated] properties,” he said.

A couple of holding groups have recently formed partnerships with the two Chinese tech giants. On Sept. 25, WPP’s media-buying arm GroupM announced a partnership with Alibaba to identify potential customers at an early stage of an ad campaign. At Cannes Lions this year, Dentsu Aegis formed a global partnership with Tencent to combine their data to identify audience intent and run targeted ad campaigns in the mobile space.

“In the U.S., you need to work across different platforms and vendors to assemble various pieces of data. But in China, you can operate at scale with just one player because of the dominant nature of Tencent and Alibaba,” said Nigel Morris, chief strategy and innovation officer for Dentsu Aegis Network, in an Advertising Week panel discussion with Chang.

The Chinese market isn’t as developed as the U.S. in terms of brand safety and viewability. Chang said digital advertising has only been around in China around five years, and the market doesn’t have trade associations like Media Rating Council. But big players like Tencent will become more disciplined, he said.

“We started working with Nielsen two years ago, the same way Facebook worked with Nielsen in the U.S.,” said Chang. “It’s just a matter of time for the Chinese market to become mature.”

As powerful as Tencent and Alibaba are, they have their limits. Both companies mainly target people in China or Chinese travelers abroad — they haven’t found a way to expand to the U.S. “I don’t think Alibaba and Tencent will come to the U.S. directly from China,” said Sorrell. “They will penetrate Southeast Asia and Africa first.”