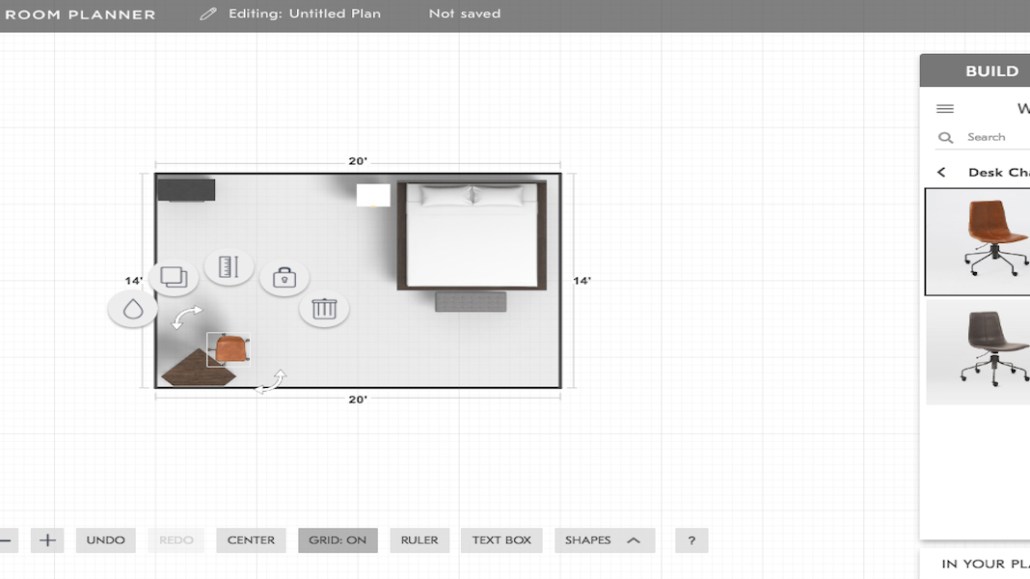 Williams-Sonoma is taking a baby step into the augmented reality game, joining a growing number of retailers who see the technology as a way to bring consumers all but face-to-face with their products outside of traditional stores.

With this week’s launch of its Design Crew Room Planner, an online platform that allows users to map out a room with potential furniture purchases down to the inch, the San Francisco home furnisher hopes to help online shoppers visualize just how much space a two-by-four chair or a three-by-seven couch would take up in their living rooms.

Designers for Williams-Sonoma’s brands — including West Elm and Pottery Barn — can also showcase the technology in-store to help customers decide what to purchase, based on what would best fit their bedrooms and kitchens, their dens and their decks.

Before launching publicly, the technology had been in the works for about a year under the auspices of Outward Inc., a company acquired by Williams-Sonoma in 2017 to build the service in-house, rather than outsource to a vendor.

The investment in the technology signals that it’s becoming table stakes for the home category: Other retailers, like Home Depot and Lowe’s, have already been using in-store virtual reality and 3D modeling technology to help people visualize home improvement projects. For Williams-Sonoma, technology’s true calling card is its ability to drag-and-drop thousands of the retailer’s furniture pieces in a photo-realistic way, said chief technology officer Yasir Anwar. The thinking: The more confident customers are about big-ticket purchases, the more they’ll spend.

“You see so many [augmented reality] and [virtual reality] companies and startups in the market,” said Anwar. “What they do is they build the customer-facing experience, which becomes a commodity today. Anybody can do it. But the key is can you do it to millions of SKUs? That’s what we bring to the table.”

And unlike other competitors, the Williams-Sonoma planner contains only three-dimensional photographs of the furniture — not illustrations — with an intent to make it easier for customers to imagine their rooms re-made.

Lara Marrero, retail leader at Gensler, said that she sees some of the biggest possibilities for expansion of AR and VR technologies within the home-improvement and home furnishing industries — which depend heavily on visuals from production to sale.

“It’s that idea almost of ‘try before you buy,’ where they can stand in their own apartment and have an app map the room and be able to put the different furniture items in it,” said Marrero. “It really helps expand the possibilities of what home improvement can be.”

Clarence Chui, president and founder of Outward, which was acquired by Williams-Sonoma for $112 million in cash, said the application in the future could be expanded to work more with augmented reality, and perhaps virtual reality, as the technology develops and as consumer appetite for the service grows.

“On the surface when you look at it, it’s really about providing a very simplified experience for a designer or a customer to be able to lay out their room,” said Chui.